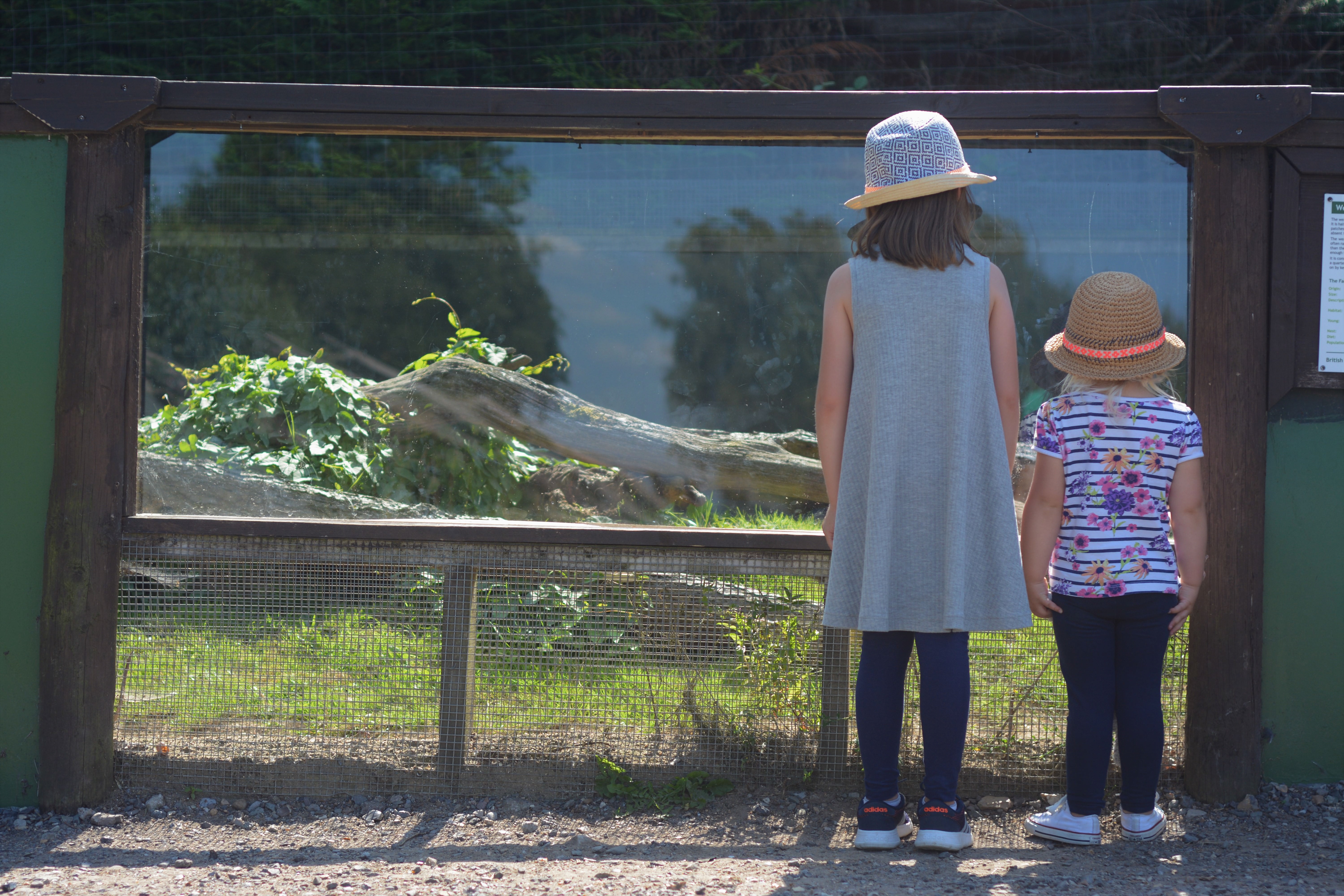 Ever since Eva was little she has been fascinated by nature. She isn’t an animal fan, I know that may seem contradictory but, what I mean is if you get her in a room with a cat, she is not happy. She is not only allergic to animals but also terrified and even now will still hide behind the nearest person or thing should a cat be near. When it comes to dogs it is a no go too. I am not sure where this comes from particularly and maybe it is her body protecting her allergies but she has always been like this. Yet when it comes to information about animals, books, nature documentaries of any kind, she will be the first in line. She knows more about birds than I do and I will often find her at night asleep with her nose in an animal question and answer book.

Therefore when we were glamping and saw that it was just half an hour away from the British Wildlife Centre we knew we had to go. Roma, whilst not necessarily thrilled with facts about animals just yet, does love to hear all about them from her sister, she looks at books and has more garden bird varieties in her repertoire than most 2 year olds!

The British Wildlife Centre which as you can imagine celebrates wildlife native to Britain, is located in Surrey at Newchapel near lingfield and was about a 20 minute drive from the glamping site Alderstead. It’s open at the weekends, bank holidays and most school holidays from 10am and was £11.50 per adult £8.50 for a child and under 3’s were free. It was a beautiful day so we thought we would take a picnic and have a quick look around before heading back to relax. We were however pleasantly surprised when we arrived at just how much there was there to see and do.

We stopped first in the outdoor picnic area to have lunch (there is a cafe and indoor area too) and sat under a tree in the shade. It was next to a really big play area ‘Pip’s Corner’ and so we sat and watched the girls play on slides and climbing frames, they kept running back and forth telling us what they had played on and found and it was just the cutest. It was all animal themed and aswell as a sand pit and the long jump there was even a badgers sett for them to crawl through and explore. The girls loved that and it was so picturesque we stayed there for a while. We got an ice cream from the little wooden hut and watched the deer in the field next to it basking in the sunshine.

As we knew Eva would be fascinated by the facts we attended some of the keeper talks too which were really informative and kept the girls attention really well. It wasn’t until everyone came together for them though that you realised how busy it was, we didn’t see that many people as we were walking around. We learnt about Foxes, scottish wild cats and otters from them. The girls were fascinated with what they were being fed too. What child doesn’t like to see dead chicks being fed to animals!!

It was such a beautiful setting that everywhere we walked was picturesque and the washlands area particularly I could have stayed and took photos all day. As you looked over the side there were so many fish bobbing up and ducks swimming along that Roma kept singing 5 little ducks, it was so adorable. Although that may have been why we didn’t see too many birds, you have to be quiet for those don’t you? Eva did read all about them on the notice boards though and told us all the ones she knew and can see from our kitchen window.

We visited the owls which hooted at us as we walked by, the weasel which Roma thought was the funniest thing ever as it was running full pelt all around the run that surrounded the enclosure above her and then inside they fell in love with a sleepy fox and a tiny little mouse inside a pot! The set up was like an old fashioned kitchen larder (think terracotta pots and saucers) and Eva spotted it moving around inside.

Unfortunately we didn’t manage to spot any red squirrels, we walked through the enclosure and I think Eva thought that as soon as we did they would come pouncing out at her and run around (see I told you she liked the idea of animals and not the actual real life ones) but the reality was that we didn’t even see one which was a shame. There were some cute little deer in there though so Roma was excited by that. “I found a Deer Mummy” she kept shouting.

After seeing almost all of the site we decided to head back, and also because it was so hot and we were not adequately prepared for the weather, oops! It was a really good day though and if you are in the area with children (or adults) who love a bit of nature then the British Wildlife Centre is definitely worth a visit. 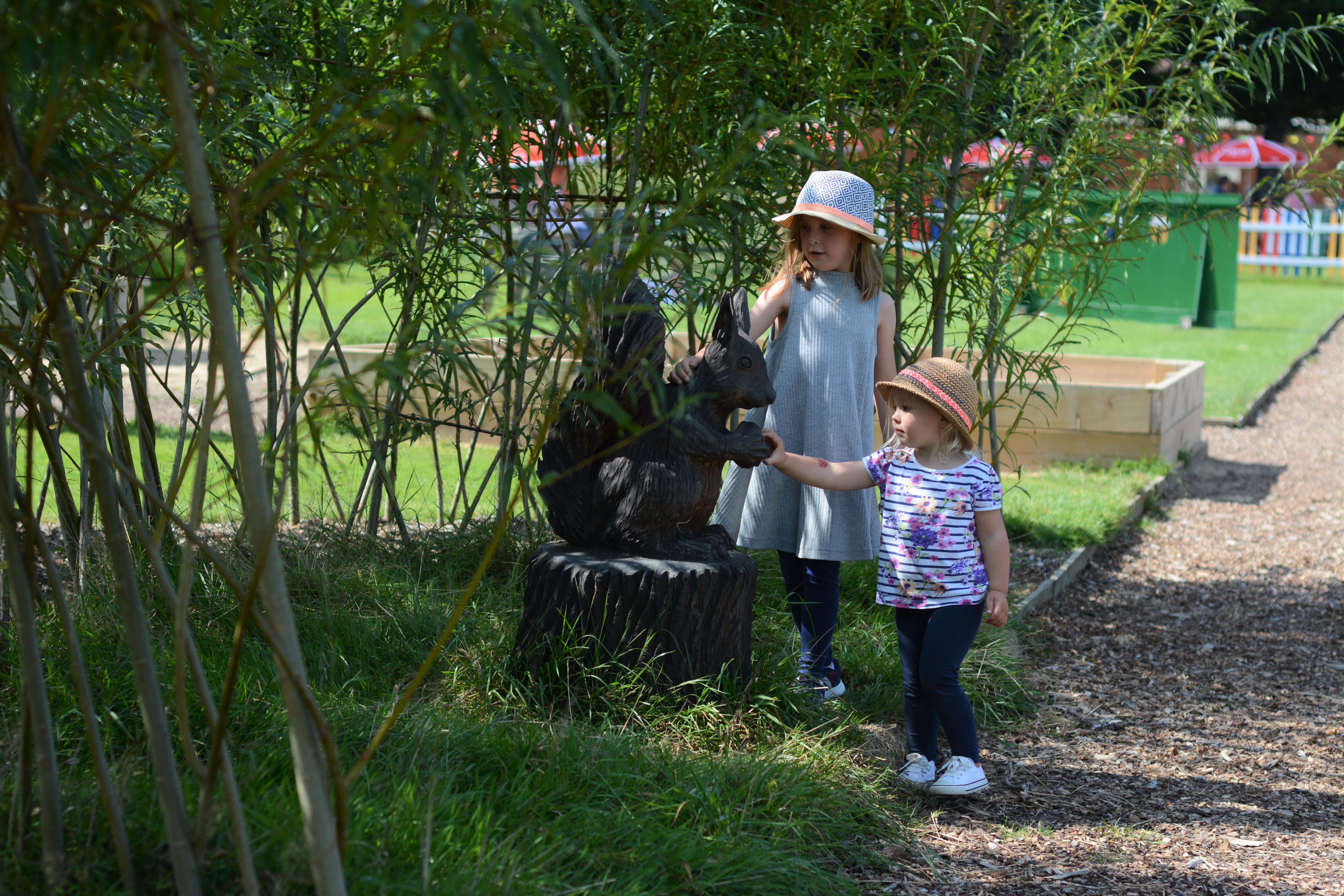 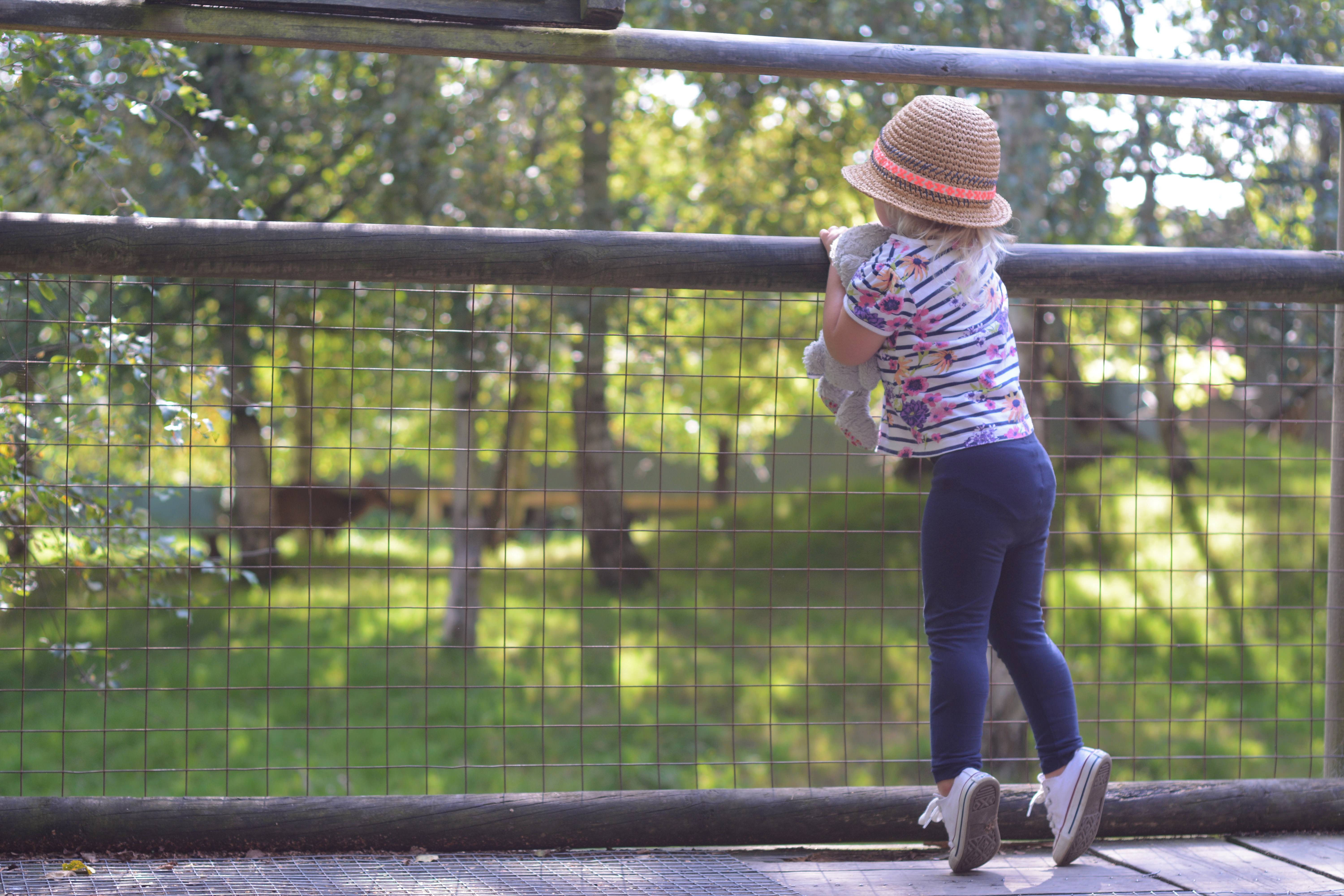 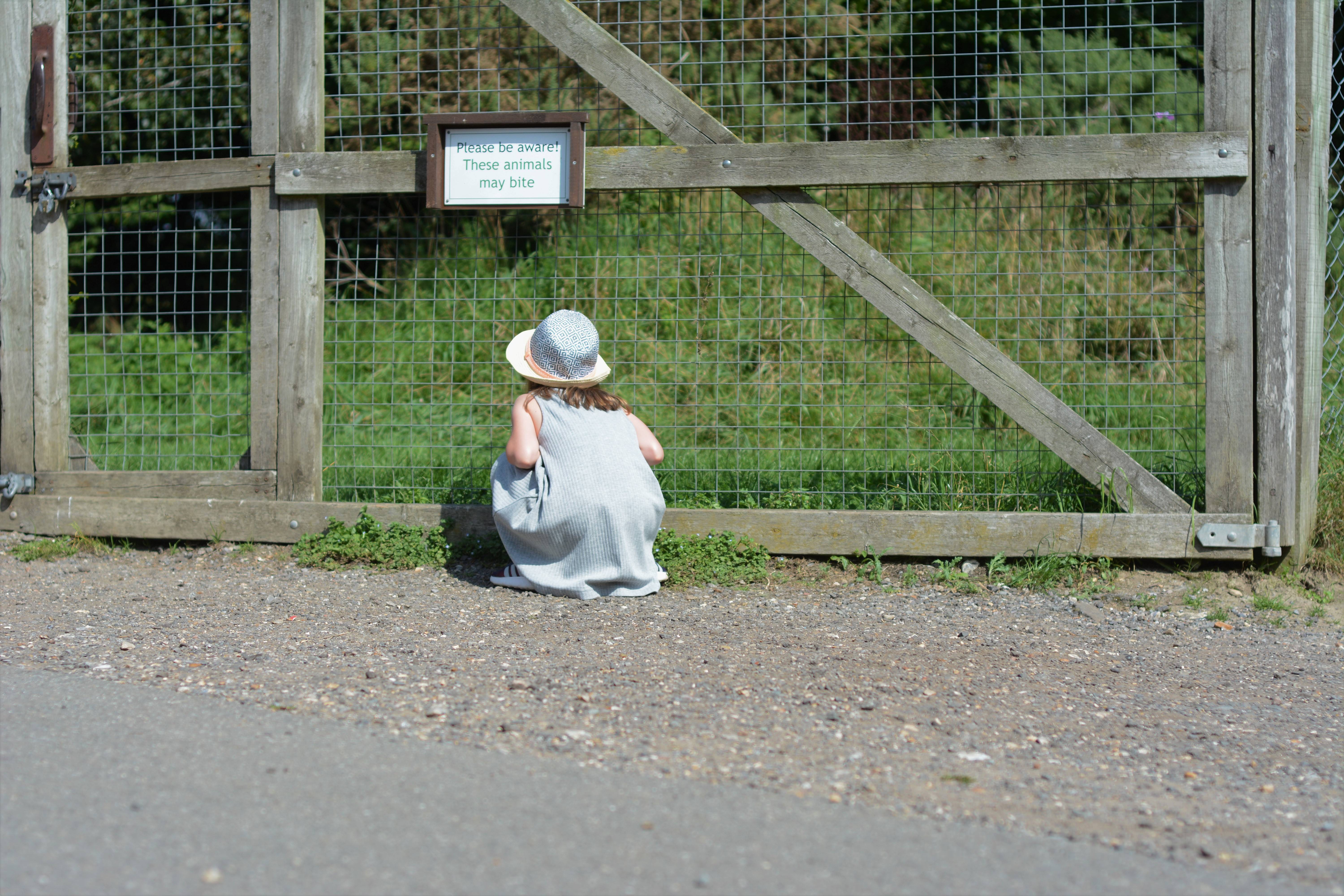 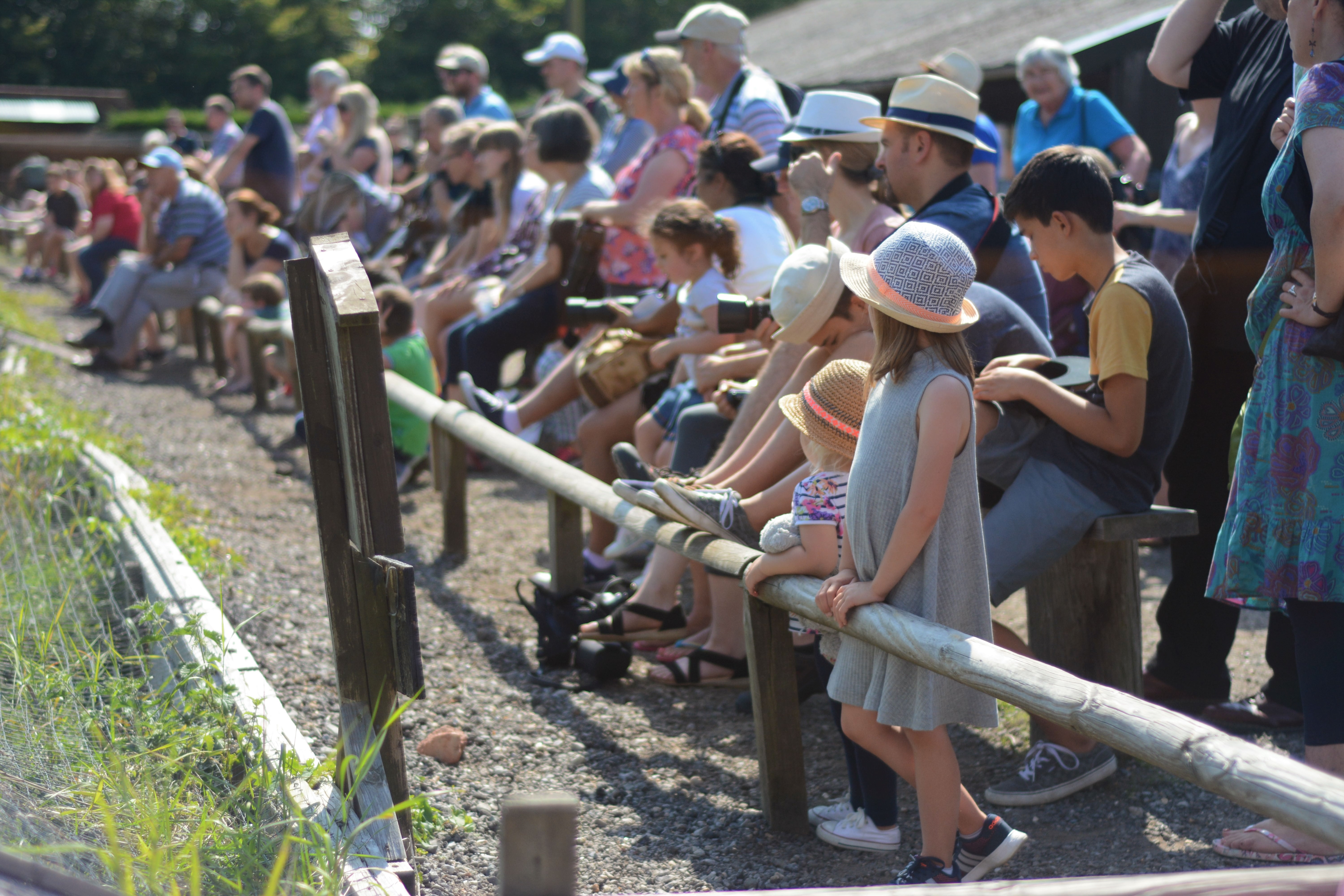 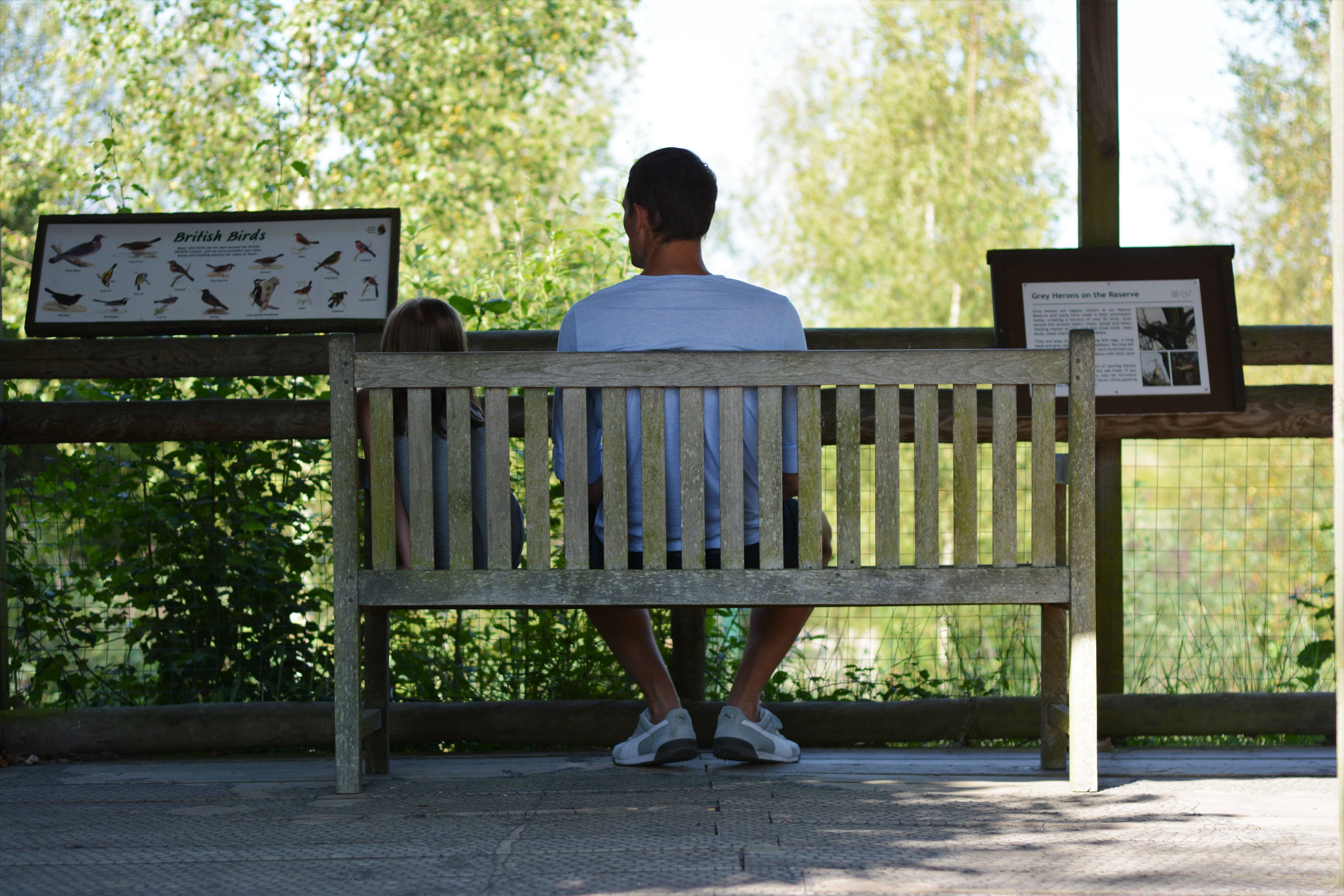