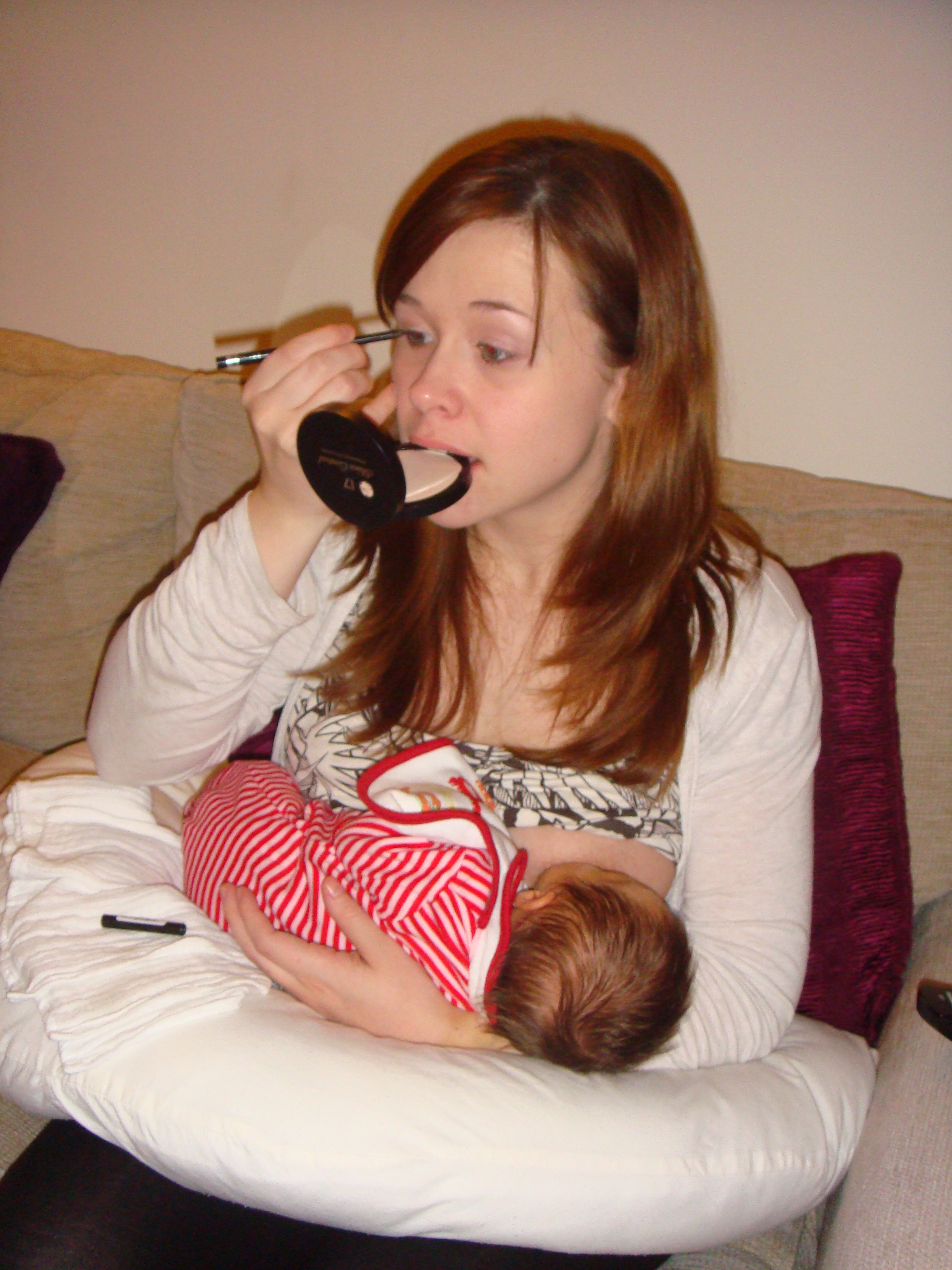 I failed breastfeeding. The first time around in 2011 when I was a new mummy to Eva, I failed.Now I know that bottle feeding is still feeding, I totally support this. I know there is no right or wrong and people make their own choices, but to me, I just wanted so desperately to breastfeed.

All through my pregnancy, my insane amount of research, countless books and late night googling told me I could. The NCT classes I paid out for, which in hindsight didn’t really teach me much at all, led me to believe that of course I could. If I wanted to make that choice, then it was so natural and instinctive that this tiny little baby would basically come out of the womb with just gas and air whilst Eddy massaged my pain away and practically crawl itself up to take that first suckle. That would be it. Easy, convenient, free, done.

The most I would have to worry about was getting comfortable with my breastfeeding pillow and making sure that someone was on hand to bring me water and snacks. Breastfeeding is hungry work you know, think of the calories burnt. Choice made, sign, me, up.

What all of this failed to tell me however, was that for some women, for most women, it isn’t like that at all. Breastfeeding is hard, really really hard, and it hurts. Breastfeeding is a skill, an art, something you and baby have to learn and master and not always something that comes oh so naturally – although I am sure that it does for some don’t get me wrong.

Eva was born 3 weeks early and was an assisted birth with a just little bit more than gas and air – we are talking a two day induced labour and epidural here. Anyway she was born in theatre and the little 6lb 10oz dot was placed on my chest in recovery to have this first feed. In recovery, in a glorified cupboard, which is exactly how it felt and I was a little overwhelmed that it was just us, and that she did not in fact seem to know what to do. She hadn’t got the memo. She didn’t reach, she didn’t suckle, she didn’t open her mouth wide when placed nose to nipple, she just cried.

We did manage to sort of get the hang of it, or so I thought, but it hurt so badly I kept asking the staff if it was ok. I was brushed off and told from the other side of the room that her latch looks just fine and it would get better. I was ‘reassured’ that I was doing great and sent home not wanting to make a fuss. By the time I was home and visited by the lovely community midwife the next day I was informed that actually I had burns, yes apparently there is such a thing as nipple burns and I had got them from her poor latch. The damage was done.

She would feed and I would cry, for hours and hours and hours. I had no idea what to do, had no-one to turn to. But I still did it, tried all different positions, tried to stay positive that maybe she was just a baby that seemed to feed for a long time. I really really tried.

Then I remember so vividly standing in the kitchen on the cold tiled floor with Eva next to me in the moses basket and I was sobbing. Like real fat ugly tears streaming down my face as Eddy got the steriliser out of the packet for the first time at 1am to try a bottle (note to anyone, ensure you know how to use it and have unwrapped it ‘just incase’.) Eddy couldn’t understand why I wasn’t rational and that a fed baby was a happy baby. That surely that would make me happy too?

I can’t say that I can really explain that either, maybe it was sleep deprivation, or hormones, the pressure put on us by society that if we start breastfeeding then giving formula is failing. Or the pressure I put on myself. I had the worst pregnancy, and now I couldn’t even give her this to make up for it. Yet I know that it wouldn’t make up for anything and that really I had nothing to make up for. That bit wasn’t my choice. But in that moment of newborn haze and not really having a clue what I was doing I didn’t want to feel like I had given up, failed, and that I wasn’t doing what was so clearly best for my baby.

For weeks I persevered and tried combination feeding, expressing, I basically felt like I was doing it all. Then she started having skin issues and sickness and if I am totally honest after pregnancy and everything we went through part of me just wanted my body back again. To not have to fight to do something that was causing so much pain, both physical and emotional and to feel like me.

I don’t remember that last feed, I am sure at the time I did. I must have wanted to soak it up, or maybe I didn’t and have blocked it out entirely but I know that by 6 weeks she was a formula fed baby. A statistic of failed breastfeeding and a red mark in her little red book when asked the dreaded question of “are you still feeding her yourself”.

Like making a bottle from scratch at 2am with stinging eyes and aching limbs isn’t feeding her myself. Yes I’m feeding her myself. With a bottle. I held her close into me and watched that sleepy feeding face as her eyelids dropped and her feet twitched as she fell into slumber. I felt her eyes burning into mine if I wasn’t looking at her as she sucked, and I soaked in all of her delicious baby smell that undoubtedly changed with her feeding but was still deliciously her. So yes, I was still feeding her myself.

I actually became quite protective over feeding her and really liked to do that myself. I know anybody now could feed her, but I still always wanted it to be me. I loved that time together, that bond, that closeness, especially at night.

She ended up being allergic to cows milk and so of course I feel guilty because that is my default! Did I do this? Should I have tried harder? Got through it? Would it have prevented her eczema? Ashtma? Allergies? The truth is of course there is no way to know and there is no way to go back and relive a different scenario. So I just have to trust that I did what I could and what was right at the time, and give myself a big Mummy break about it.

This picture here is literally the only one I have of me feeding Eva. Honestly? At the time I was a bit annoyed at Eddy taking it as I didn’t exactly feel at my best. Over the years I have come close to deleting it so many times. But now it is actually really special, because no I wasn’t able to breastfeed her for as long as I would have liked and yes I do feel bad about that. But I did breastfeed her, I did try my best and I did spend so long feeding that I had no choice but to multitask and do my make up at the same time. So I will stay away from the delete button and hope that I always feel like this slightly awful, grainy picture will always remind me of those special breastfeeding moments we had.

The photo below is also one of the very few I have of her bottle feeding. Again it was taken by Eddy who thought it was lovely her holding her own bottle, a really nice moment. Yet I somehow hated to see photos of her with a bottle at all. Even though that was our reality. How ridiculous is that? This is how she fed. She fed, she grew and she was nurtured into the perfect little person she is today. So breastfed or bottle fed, they all come good in the end. Though it still wouldn’t stop me trying the second time around. 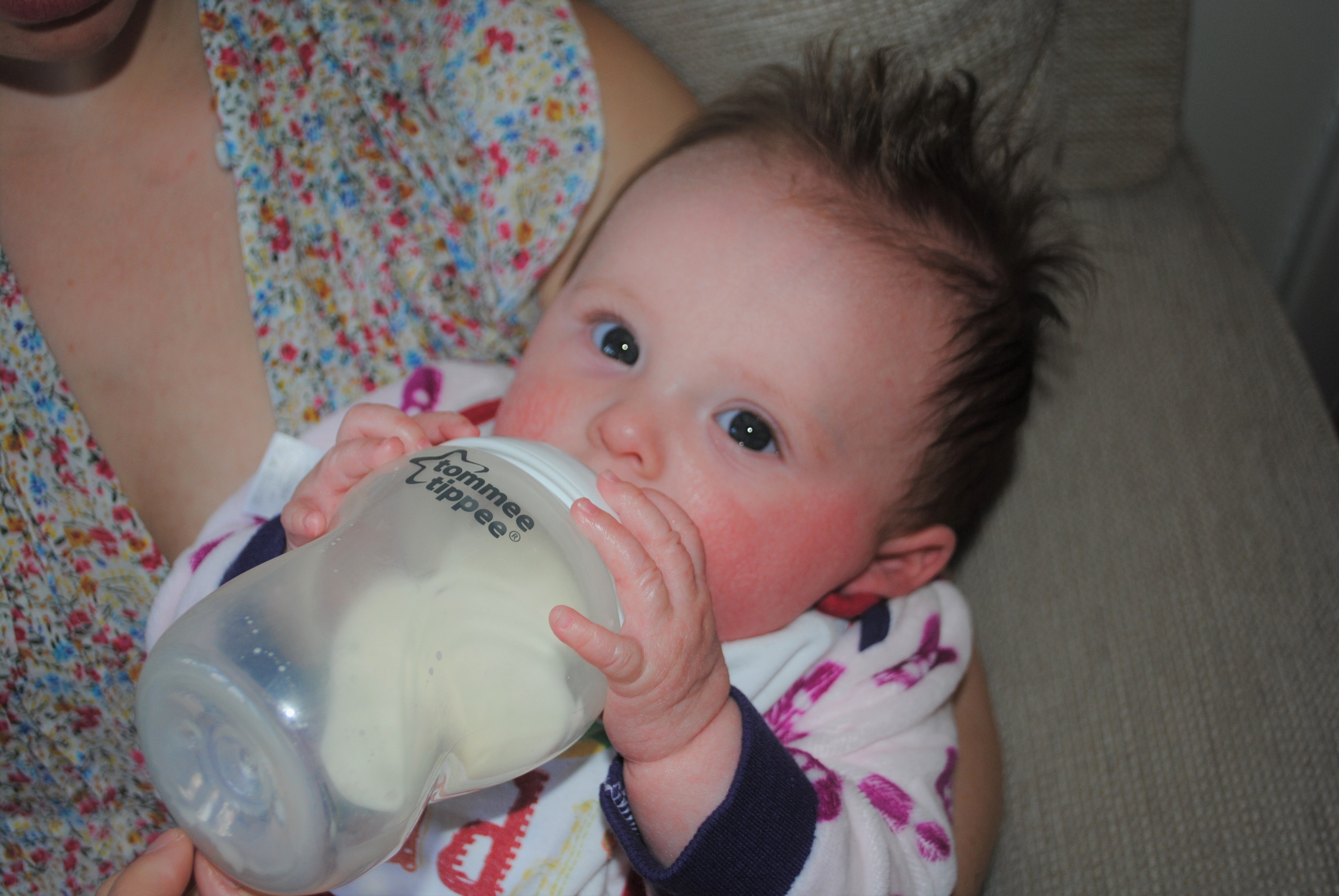