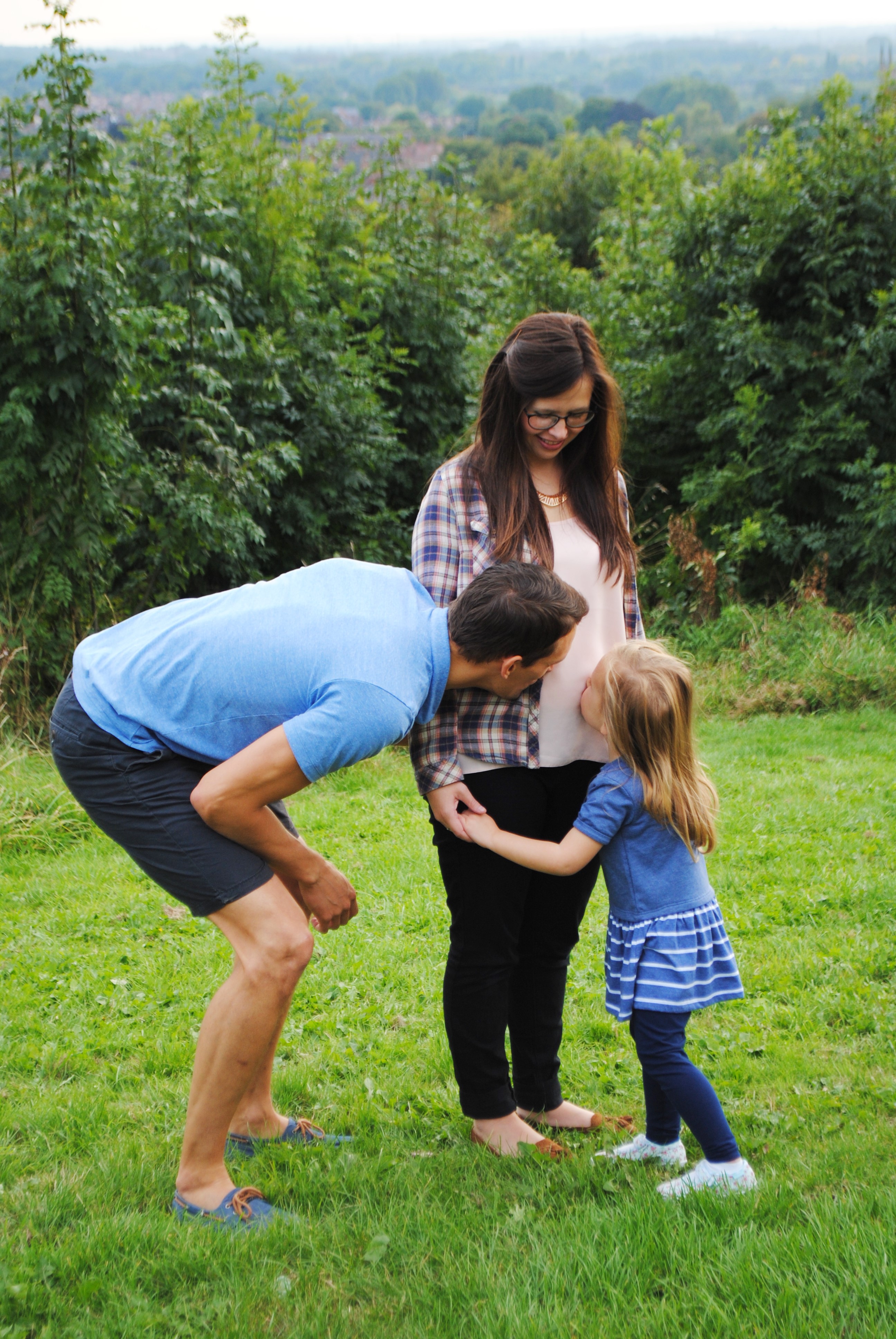 Back in September 2014 before I had even started blogging and 20 weeks pregnant, I made this video for our friends and family as something a little different and a way to let them know if we were having a boy or a girl. The big gender reveal! I cannot actually believe that this was 18 months ago now. It really feels like 5 minutes ago and yet I look at my walking, talking 1 year old and have no idea where the time has gone. It always makes me emotional to look back and watch, E looks so young and you realise that when you have more than one child you blink and they change, you don’t tend to see it day to day as you see them all the time, when you pick them up from school it doesn’t seem that long since you dropped them off; yet a month goes by or in my case a year and a half goes by and you realise that their face has completely changed. Anyone who has read this blog before knows that this is obviously not going to be a surprise gender announcement but I thought I would like to write a post and record the feelings for the future. And of course because we all love to look back at it, E asks to watch it quite alot and I hope that in time it will be nice for R to enjoy too. If however you are new and you don’t actually know, then skip to the video and read the post after!!

With my first pregnancy we had a surprise, we really didn’t mind whether we had a boy or a girl. We had to have our 20 week scan early at 17 weeks with only 1 days notice due to some complications. This meant that although we had discussed that we would probably opt for a surprise, we didn’t have the time to go over the decision or change our minds there and then. It really wasn’t a question when all we wanted to know is if the baby was ok. As I lay there the fear engulfed me of what they might say, of what they might find, that I might see and I wasn’t even able to look at the screen, tears rolling down my face. So the scan in itself wasn’t all that enjoyable, it didn’t seem like the right thing to do. Having said that, all along I was convinced that she was a boy. I’d had dreams it was a boy, I knew what his name would be and so it was a little bit of a shock when our Little Lady made her appearance. I even let me husband choose her name, as I liked the boys name so much and he wasn’t sure, I let him chose the girls name because it didn’t matter, it was going to be a boy. To the point actually where when she was born, this beautiful wrinkly little thing that had my little button nose and a head of dark hair, my husband uttered the words “It’s a Girl” with a tear in his eye and a frog in his throat. I replied “are you sure?”  so yes when it was a girl it was a surprise. A lovely surprise of course and now I can’t imagine it any other way.

When we were pregnant this time, again we didn’t have a preference, having a sibling for E would be amazing either way. I thought it would be really great if she had a sister, I have sisters and as we were only having one more we knew it would change/settle/determine the dynamic of our family and indeed of her bond with him or her, it would be great either way but there is no doubt that it is different. It seemed natural that it wasn’t really a question on whether we would find out, we just assumed we would have a surprise again as we didn’t feel strongly about knowing either way. E at the time was 3 and half and she was adamant that it was a girl. She wanted a sister, she did not want a brother, she was not afraid to tell anyone that listened and so in the little mind of a determined three year old only child, she could not fathom or get her head around the fact that it would be any other way. That is what she had asked for so of course it would be a girl. We therefore made the decision to find out. It was going to be a big change for her. At just turned 4 she was going to be a sibling and we really wanted it to be a positive change for her. I am sure if she had have had a brother she would have loved him all the same, she is a very loving and mature child and she does understand but she was just so adamant she really wanted a sister we decided to find out. Just in case she needed the next 20 weeks – or 22 weeks as in my case – to come to terms with life with a brother, with the fact that the universe didn’t always give you what you had so wished for. A lesson she is still yet to learn!

The scan. This time around it was a much more pleasurable and relaxed affair (as much as you can relax waiting to know that your baby is ok in there) I lay on the bed and held Eddy’s hand, excited to see our little baby again and all we could think about was E. Once all was checked and we knew that for now all was looking perfect with our little baby, the sonographer asked the question. The one that she probably asks multiple times a day and yet the one that is so huge for each and every family. I still remember the excited butterflies in my stomach as we looked at each other, smiled and said yes if it was possible we would like to know. As she told us it was a girl I cried a little, the emotion of knowing all was ok, of picturing our little family set up for the first time, and also so excited to tell E that she would get her wish and have the little sister she craved.

We had planned when we got back from the hospital and picked E up from nursery that we would take some photos and put together a little video to announce to our friends and family – pre blog. E was so excited when we picked her up to ask but we actually kept it a surprise right up until the moment where in the video I whisper in her ear. That is the moment that she found out she was having a baby sister. It is amazing and I love that we have it captured forever. She was just so happy, actually jumping for joy and I always said that if it was boy that moment captured on camera would have been priceless. I don’t know what she would have done to be honest but it could have been hilarious had she burst into tears that in fact she was not ready to have a brother. Alas it didn’t happen and I am very happy that we captured it in this way. As I said at the start it still makes me emotional every time I watch it, it brings back all the emotions of the day and the reactions of people when they saw it too. I think because we had a lot of balloons in the video people went through the first bit thinking we were having twins! One of my sisters actual took the photo’s that day and we didn’t even tell her as we wanted E to know first. I love this photo where E is looking at her with a look that speaks volumes. Really? I am having a sister? Are these people telling the truth? Auntie Carrie did you know? Isn’t it excting? I am going to have a sister just like you have. 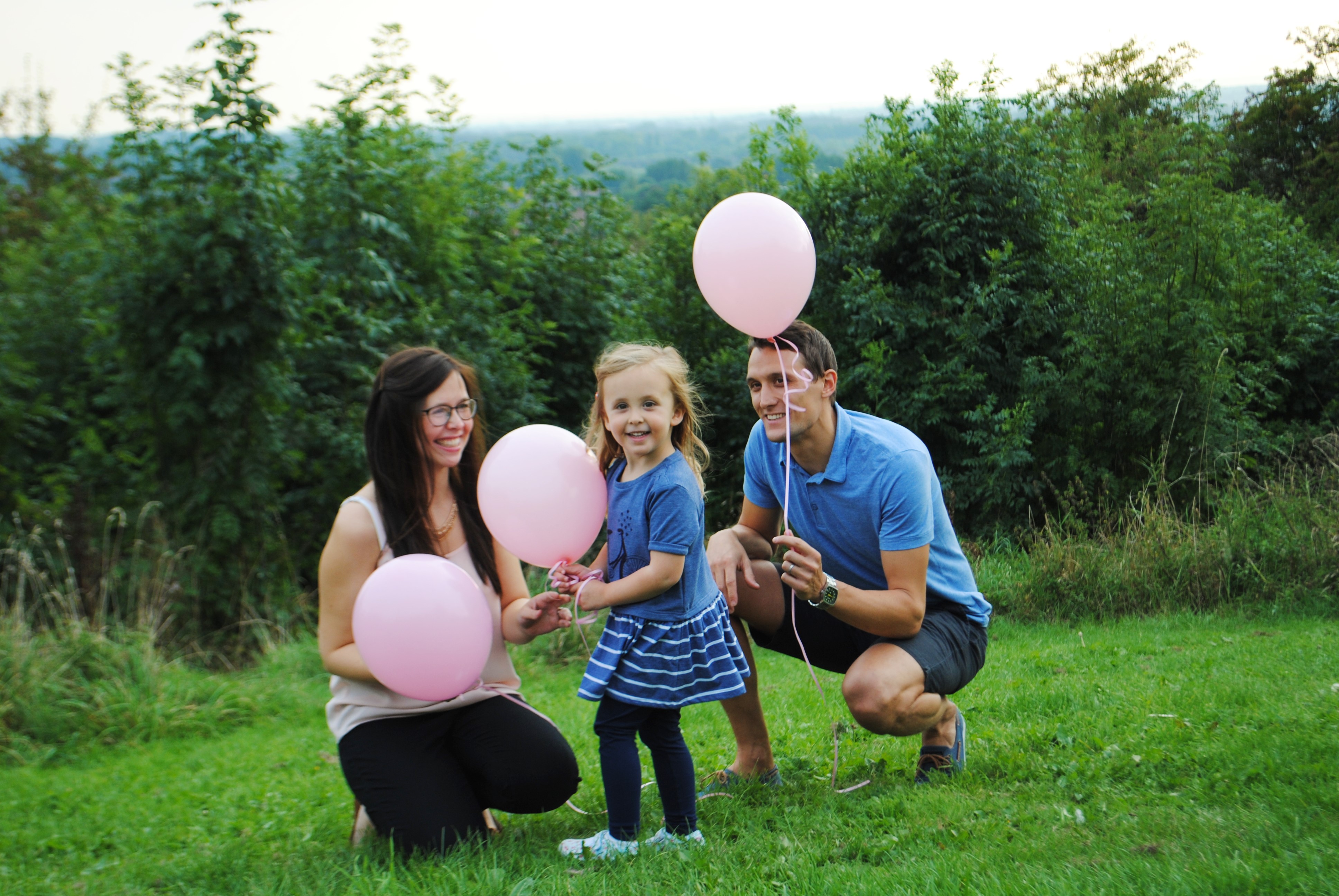 It was actually really nice having a surprise first time around and then knowing for the second one. Logistically it was easier as we would know whether we would have to buy new things or not, and it was nice to have the nursery ready. We went for a grey theme anyway but we could make that grey and dusky pink and it was just really lovely to sit in the chair, me, E and baby bump, talking about things and know, that in a few short months there would be another Little Lady to complete our tribe. We had a loss before this pregnancy, before R, and so in hindsight I do think it was really helpful for me in this situation to know what she was and have that to focus on. I probably bonded a little more with her when I was pregnant too. I had hyperemesis and due to how ill I was I have to admit that I struggled to bond with E throughout the whole time I was pregnant. Of course when she came and the hyperemesis lifted it was another story; however it was nice this time I think for me to have that visualisation I guess. Knowing her sex meant that we could choose her name and although we didn’t tell anybody what it was, it was always going to be her name and yeah it was just quite exciting for us. To have a different journey. This video is of course about R, she was baby bump and it was her announcement, but as is the way when you have a heart full of more than one child all I see is E, her face and her memories. The joy and bond that a Little Lady can have with such an abstract idea at the time was nothing short of amazing. She is our little superstar and is the most amazing big sister R could ever ask for.