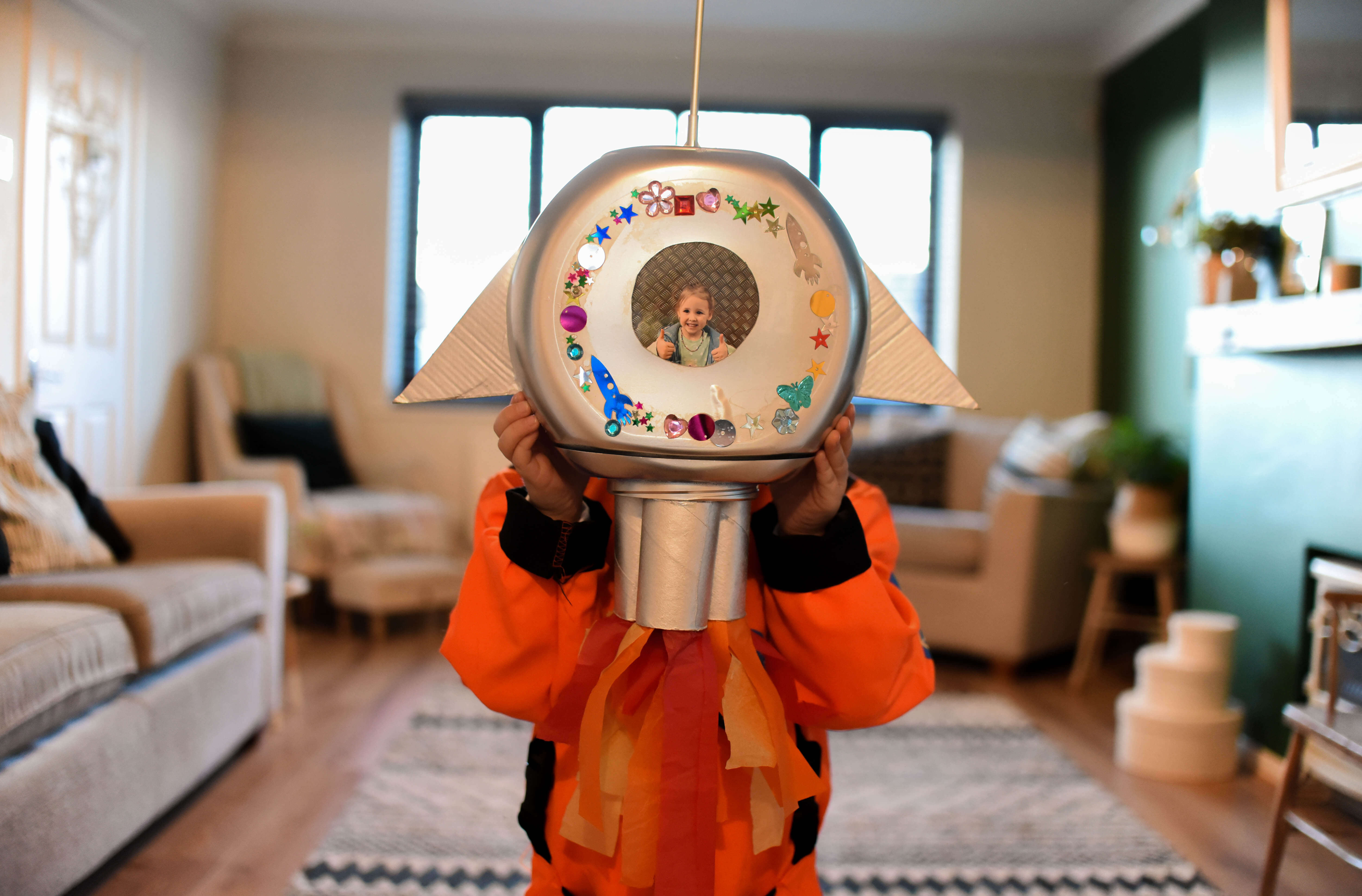 Luckily I have a space enthusiasm on my hands so when nursery asked her to make a space ship or rocket out of recycled items to go with their weekly topic she was so unbelievably excited. I mean what better ‘homework’ than that? (If you can call it homework at 4 years old? I am not sure I want to!) The nursery staff also paid me the biggest compliment casually saying ‘oh you’re crafty so it shouldn’t be a problem’ I am not sure that is entirely true but needless to say I took that compliment, ran, and set to work at what we could fashion in just a day or two and save myself diving head first into the blue recycling bin two days before bin day.

Thankfully we were all out of washing tablets at just the right time, that along with the recycling from the weekend which was yet to make it out of the door into say bin (anyone else have a pile on the side despite the bin being just inches away behind a door? Just us?) a child that doesn’t like to let go of any thing (hello dinosaur balloon on a stick from her birthday a month ago) and some glue and we had a base.

A very cute picture of her and a can of spray paint later (ok ok I’ll admit that a 4 year old isn’t going to have used spray paint but hey if it had ALL been left to her it would be a single toilet rolled in glitter glue so you have to step in in these situations right?) and here you have her very own spaceship which she is so very proud of. And yes she did stick every one of those gems on herself after choosing the very perfect ones (and let out a squeal when we had a rocket), and the tissue paper fire, so she practically made it herself ok?

Actually I feel like my role a parent is to bring some ideas to the table with the usual help of my Pinterest addiction (obviously) so this was right up my street and I hope that she picks up on this and it gives her some enthusiasm for the future, her big sister is a big craft person so I have hope in her too and it was really lovely for everyone to get involved, it really did feel like big term effort and there is nothing more I love than to feel like we work as a team. There is nothing more that Roma loves than to impress Eva too and that she did.

Plus she loves it so much and her little face when she took it into nursery (whilst dressed as an astronaut naturally) and placed it beside all of the other beautiful individual creations was such a sight to see, so inclusive and she just wanted to show it off to everyone that would look.

In fact she loves it so much that I actually don’t know what to do with it! You see I am the Mum who usually coins the endless bits of paper they bring home from nursery or grandparents as ‘bin art’. I mean it makes the ones I do save even more special thought right? That’s what I tell myself but truthfully we only have so much room in their memory boxes, and after all, that is why I have this blog and take millions of photos, so I don’t actually have to keep this stuff.

Though of course I still show amazing enthusiasm at the time and hang it up for a few weeks in the playroom, I am not a monster of a parent you see! But lets face it when they are grown up and I am passing them years of saved up stuff for them to put in their own attic I am not sure they will share the same enthusiasm as when they were 4!

Unless that is she turns out to be an astronaut and then she might be distraught at the fact she doesn’t have this to show off her love of space from such an early age. Hindsight really would be my friend right now.

Maybe I’ll just keep it on the side for a few weeks more! 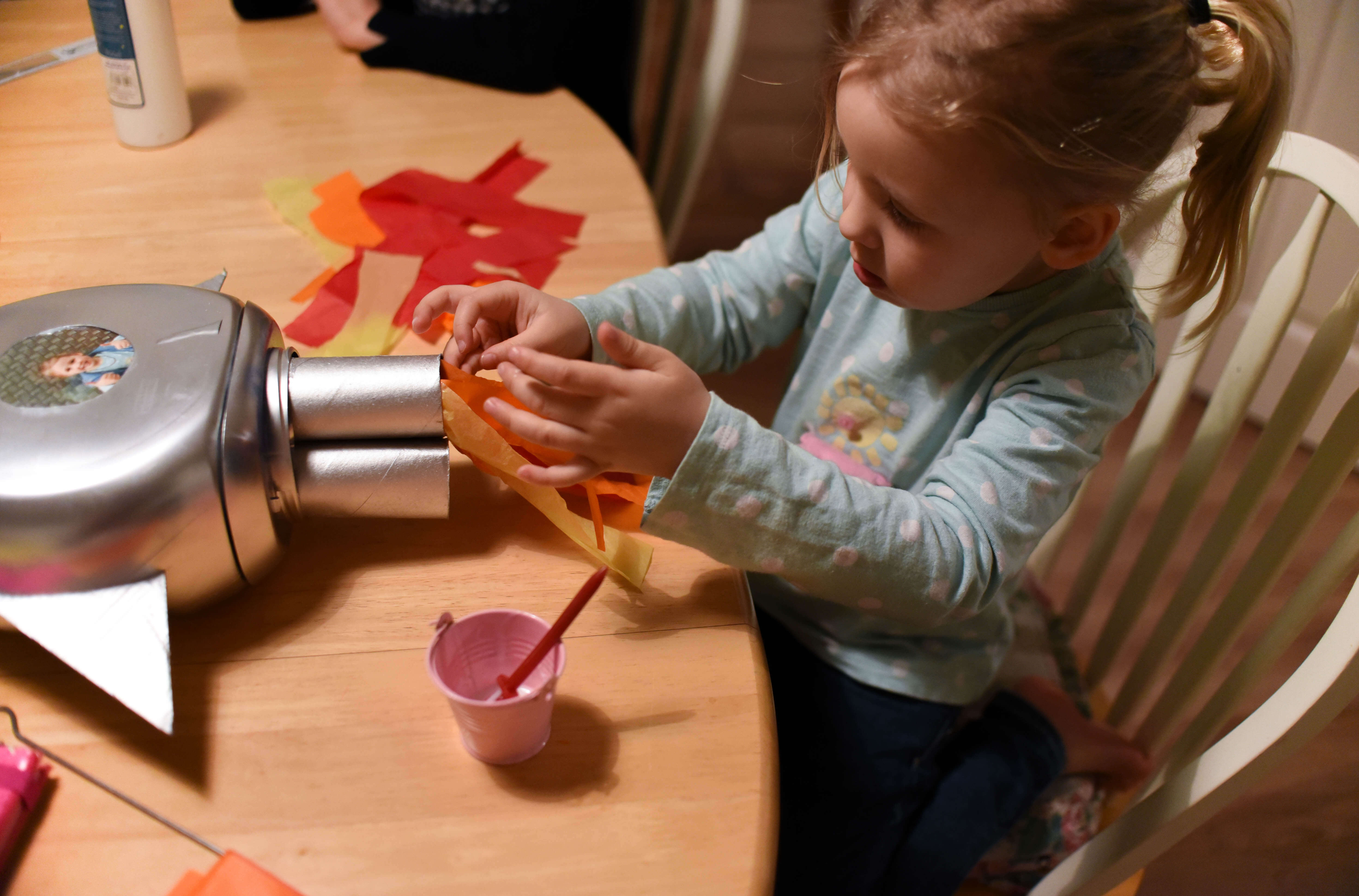 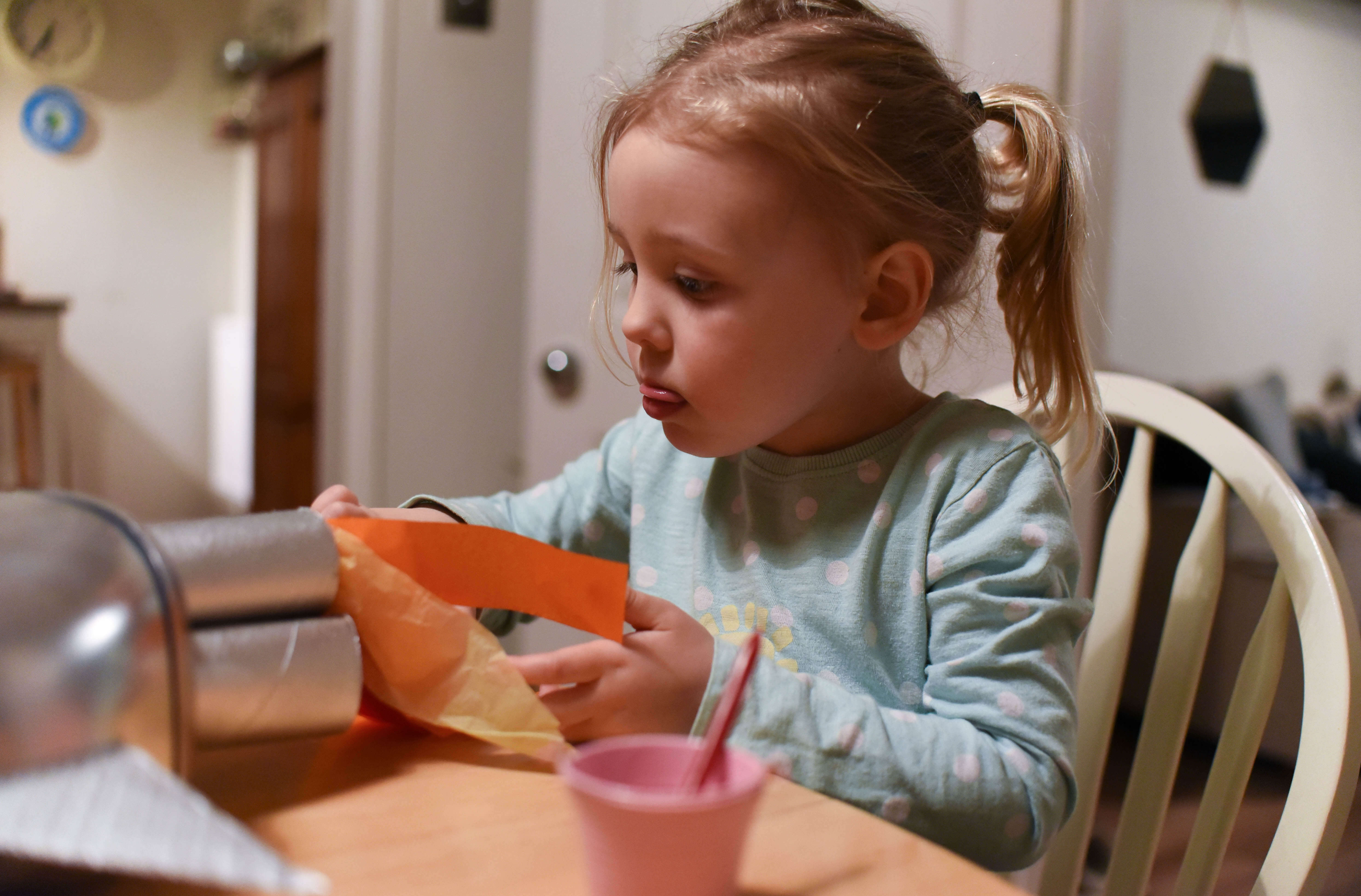 Her little tongue just kills me every time! So cute. 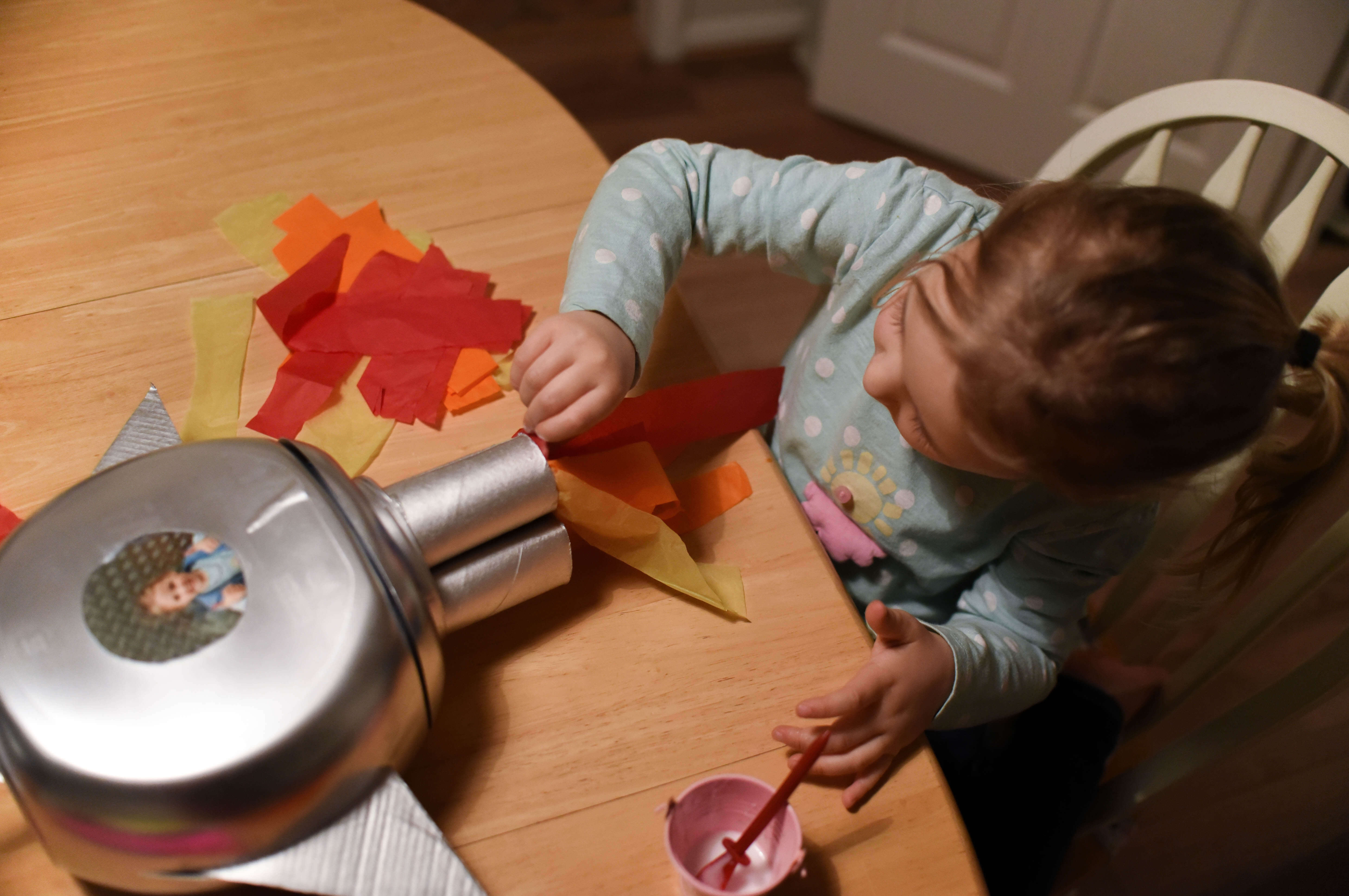 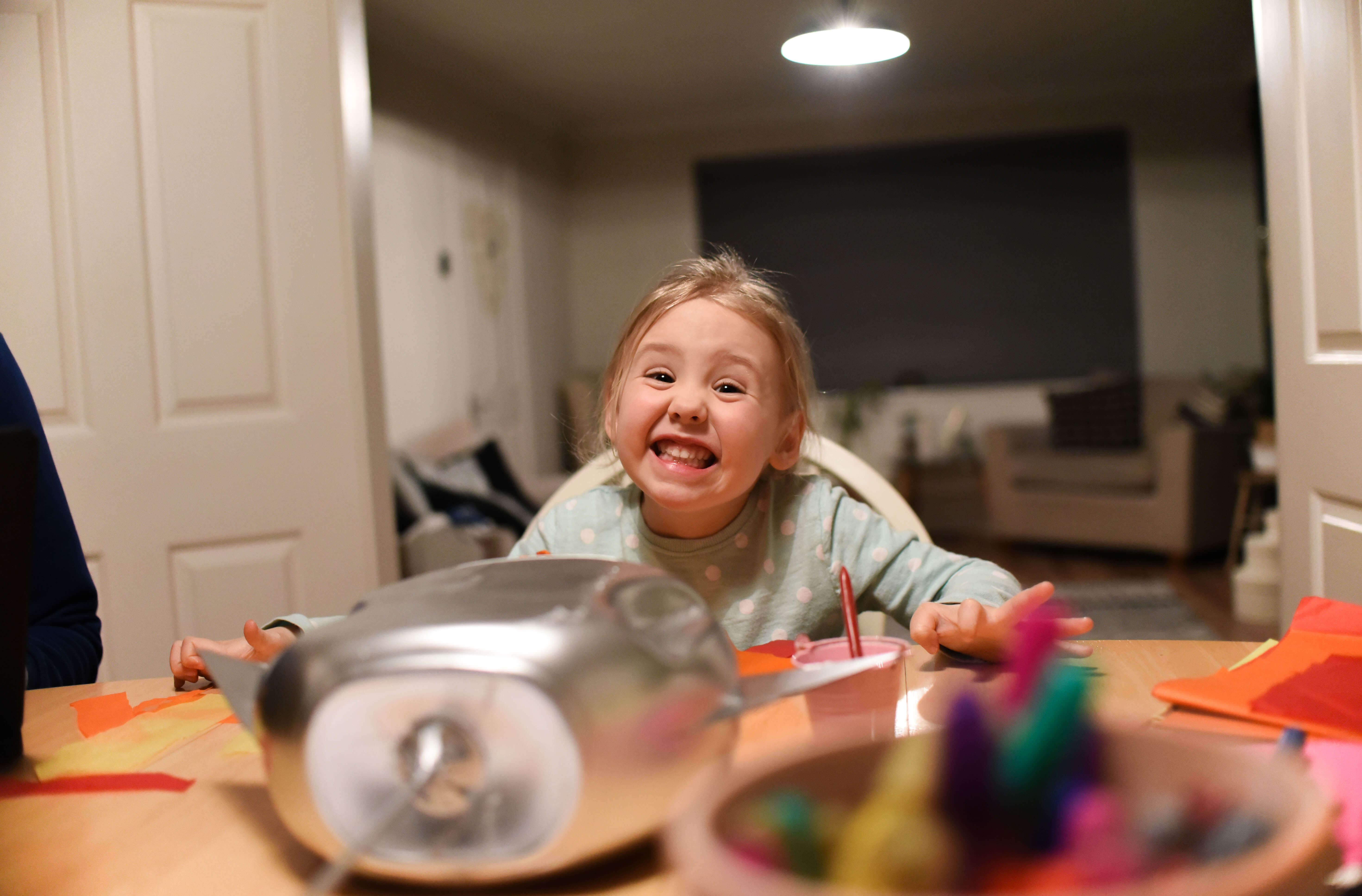 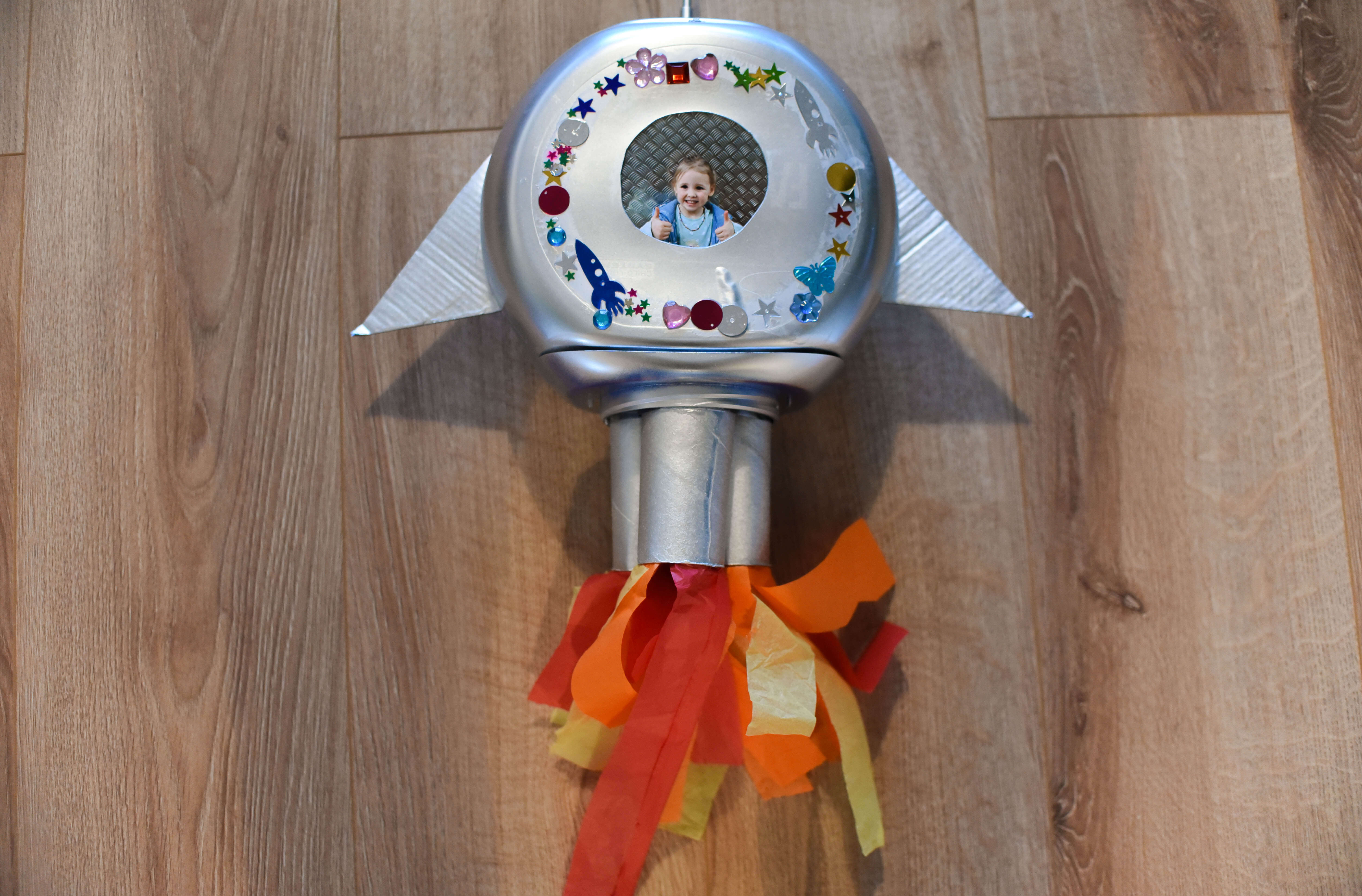 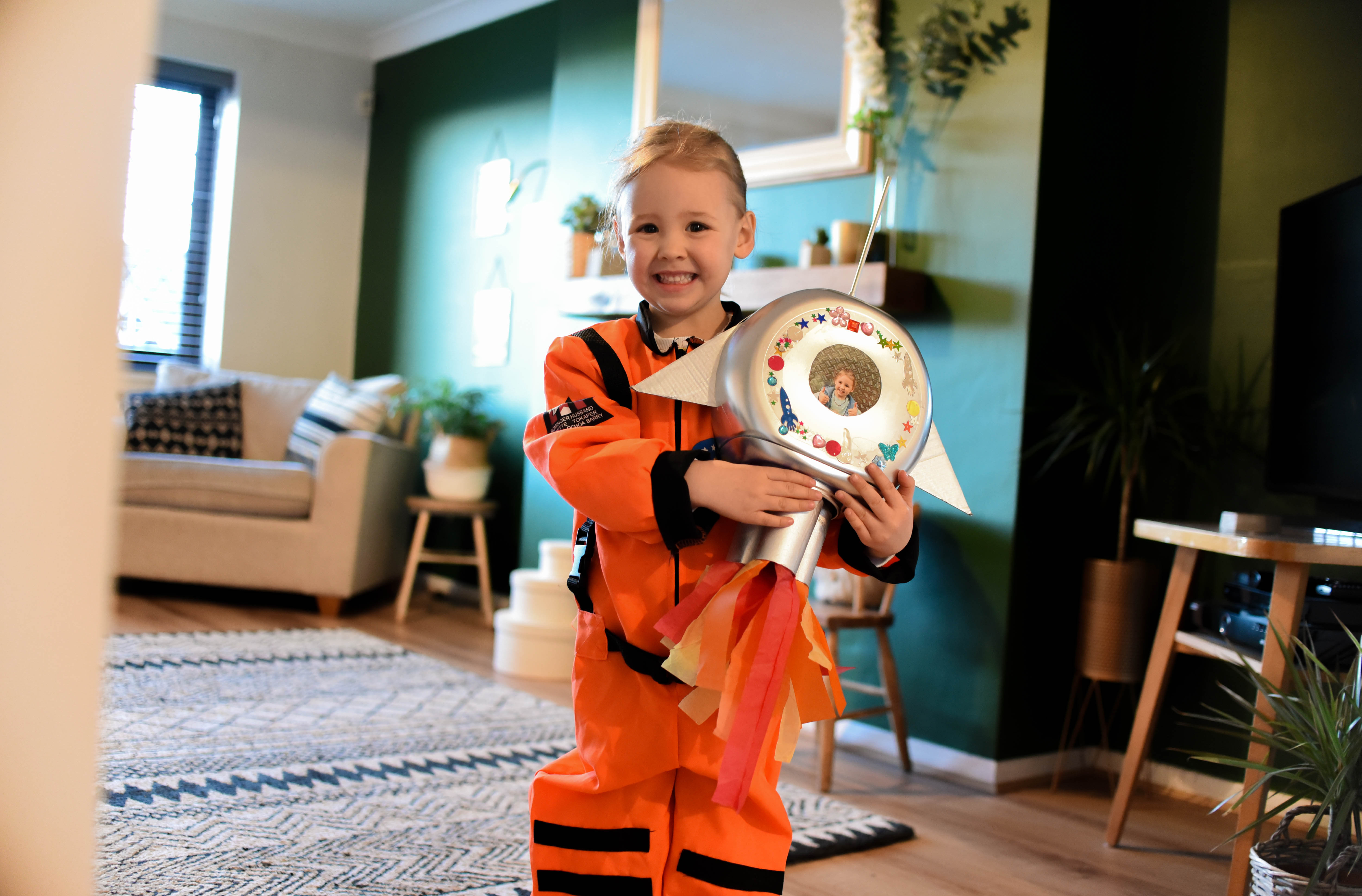 The oversized costume wasn’t necessary for nursery but Roma does love to be extra and wanted to look the part, she even took her own space book too. Space centre here we come! 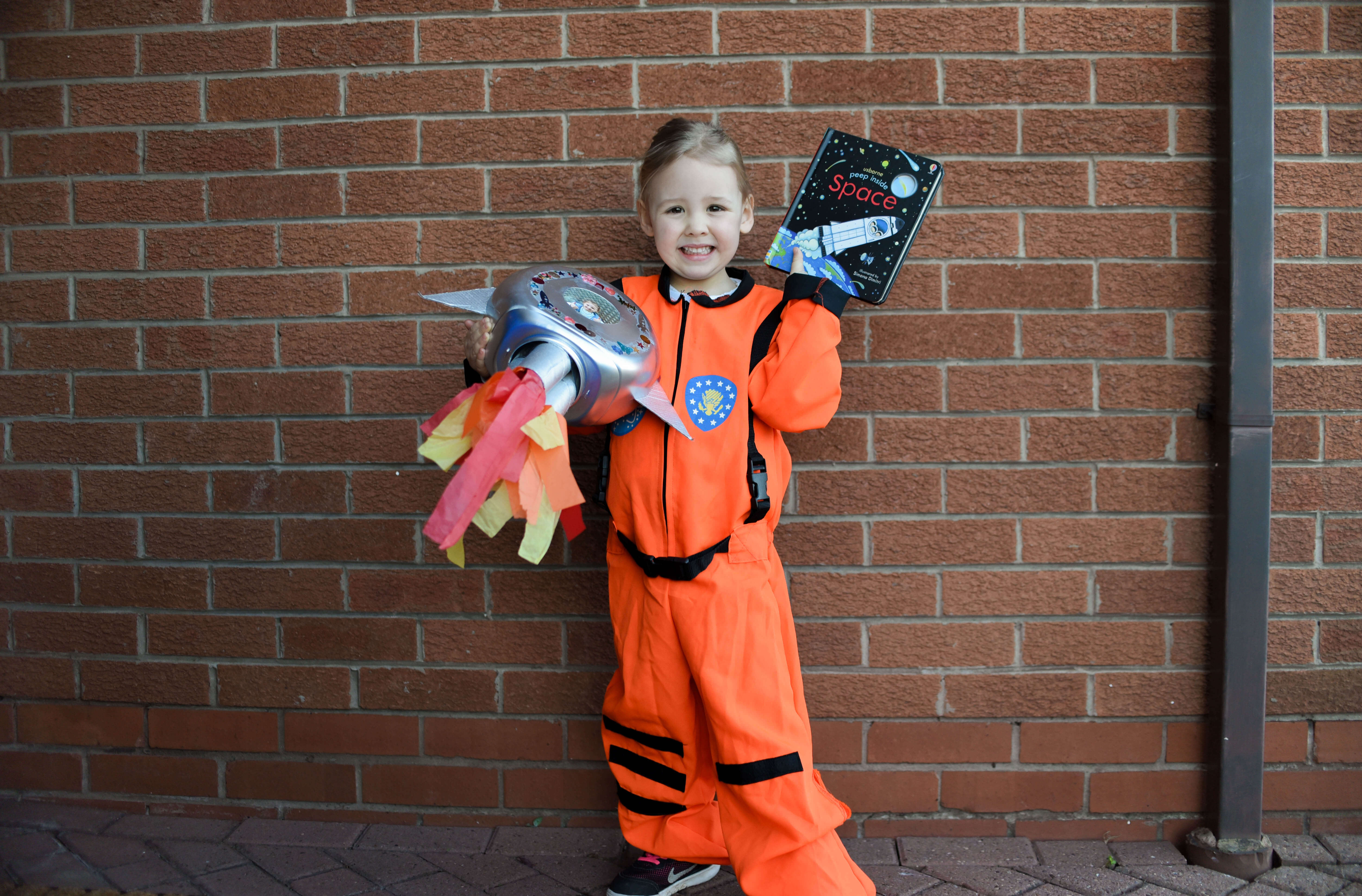