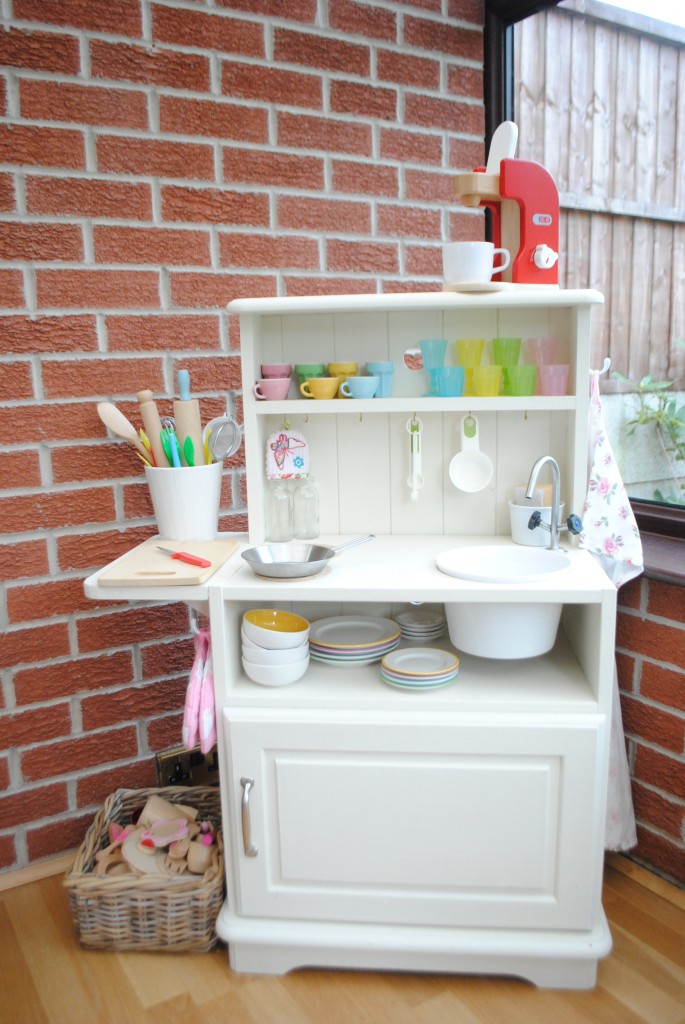 In our house we have a love for wooden toys. I am quite traditional when it comes to toys and there is just something exciting, engaging and of course visually appealing about them. Ours also seem to stand the test of time and span the ages as they use them in different ways.

For E’s second Christmas – and her birthday 5 days after – we had decided to get her a wooden play kitchen. We looked all around different websites and shops to find the perfect one. In our old house where we lived at the time we housed all the toys in the dining/kitchen so it needed to fit in an alcove space and for me I like it to blend into the decor somewhat. I am one of these people who like to put everything away at the end of the day once the children are in bed. I know it isn’t for everyone but especially then before we had the playroom, there were all sorts of toy boxes disguised as seats and cupboards that just fit into the room. How was I to know when I was growing up that those beautiful dressers probably weren’t filled with your finest crockery and expensive whisky but board games and dress up hats!

Anyway our search didn’t bring anything up that we found suitable or that wasn’t quite expensive and so we decided we would try and make one. I had recently  discovered the delights of Pinterest and felt sure I could create something that E would love, even if it only lasted a year or so it was just for her, for play. As luck would have it one of the Mr’s auntie and uncles were changing their furniture and kindly gave us an old television unit. I trawled Pinterest for inspiration and the Mr set to work. This is what it looked like before. 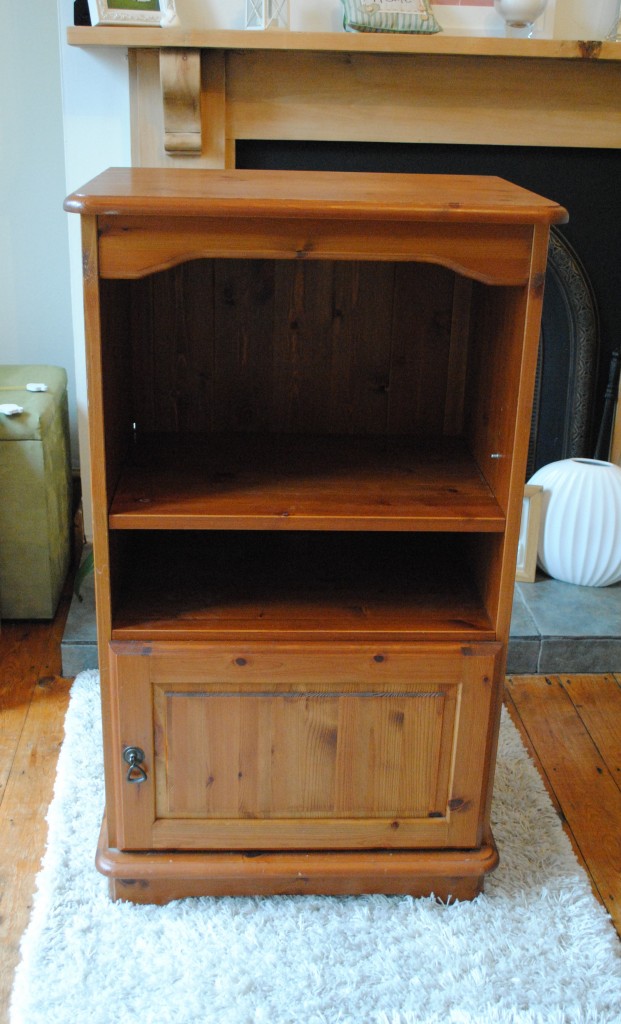 The Mr then took it to the garage and chopped it up a bit! He cut the top half back so that we ended up with a back for the kitchen, made a hole for the sink and added and extra piece on the side. I then painted it with some all purpose off white paint, added some hooks and a new door handle.  I stuck some cork placemats I already had on for the hob, used a cooking pot for the sink and the tap was made by my father in law who can pretty much make anything out of steel. And here is what we made! 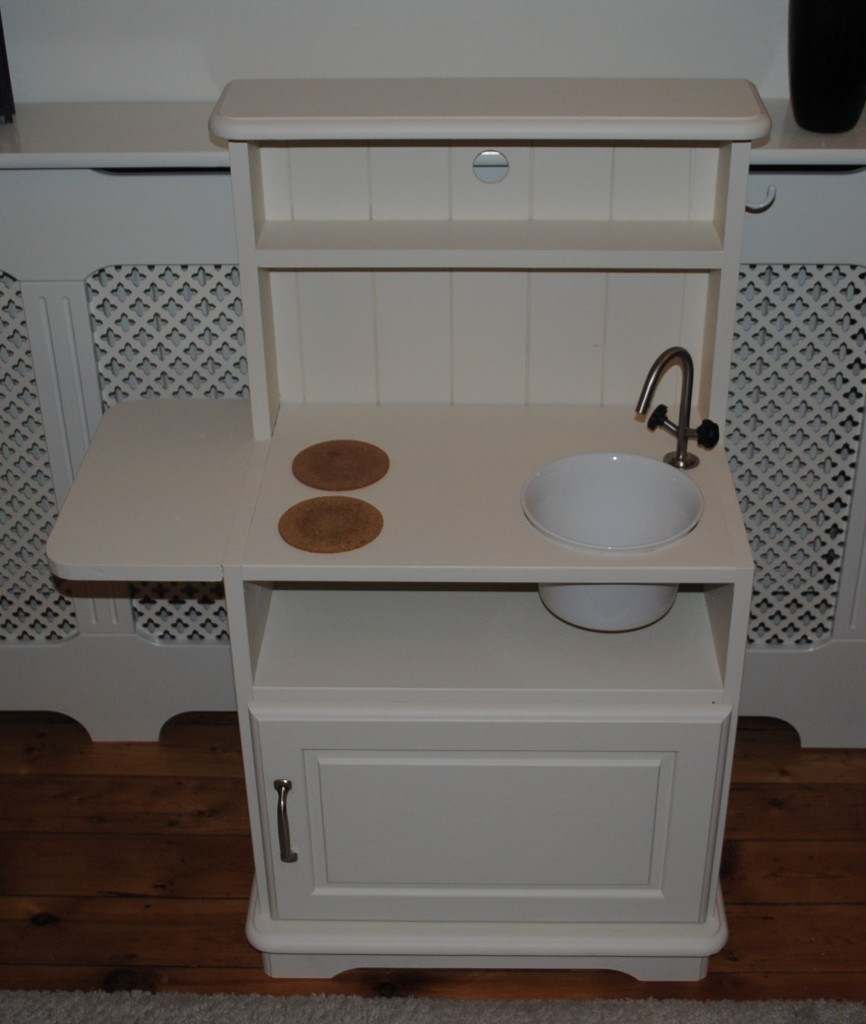 The fun part of any project like this for me is the accessories, giving it character and seeing how it can look and be played with in all it’s glory. We sourced bits and bobs from all over the place and actually used lots of things we already had but the colourful plastic cups were from Ikea here , as were the pots and pans here. 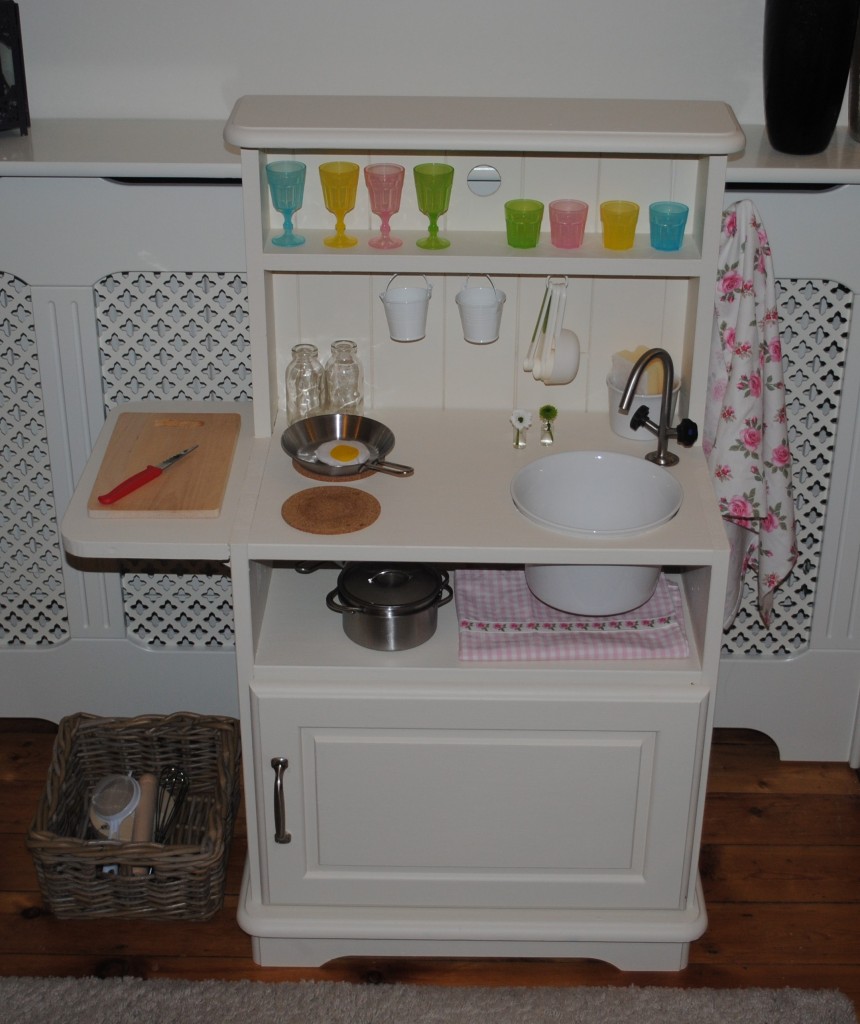 As we set it up in the lounge on that cold Christmas eve night, after E had left Father Christmas his Mince Pie, gone off to bed in her new Pyjamas and closed her eyes tight, I felt such a wave of excitement. Butterflies in my tummy and an anticipation to see her face, if she would like it and if all the hard work and hours planning, shopping and making would be worthwhile. Then came the moment, the walk into the lounge, the glint in her little eyes of what could possibly be under the blanket that covered the surprise. It is fair to say that E absolutely loved it, she was so excited, chattering all about it and making anyone that entered the house something out of her new toy – a hostess in the making. It is still to this day the most played with item we have. Since this picture was taken over 3 years ago the kitchen has stood the test of time, a house move, hours upon hours of play. It has had it’s knocks and chips here and there but the great thing is that we can give it a quick spruce up with a lick of paint or actually just leave it and not be precious. It certainly isn’t perfect but for us it is absolutely right. It has evolved somewhat, has been added to and now has a happy place in the playroom next to other items which we have since made, a shop/theatre and a lego table – posts coming soon!

The Kitchen now in all it’s played with glory. 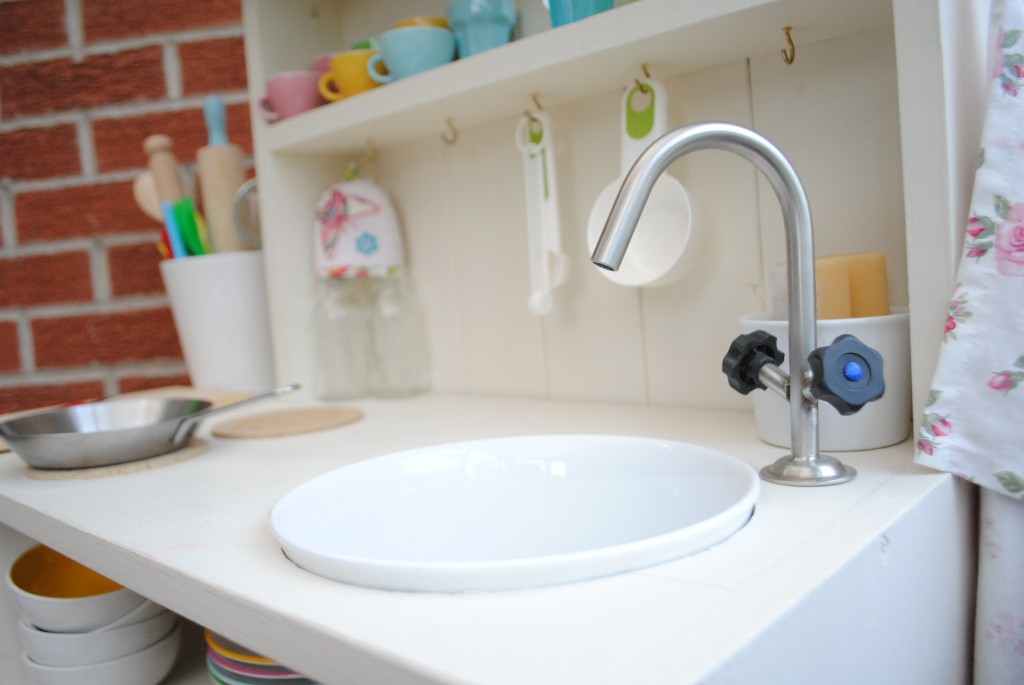 The aforementioned tap made by my very talented father in law, complete with hot and cold indicators! 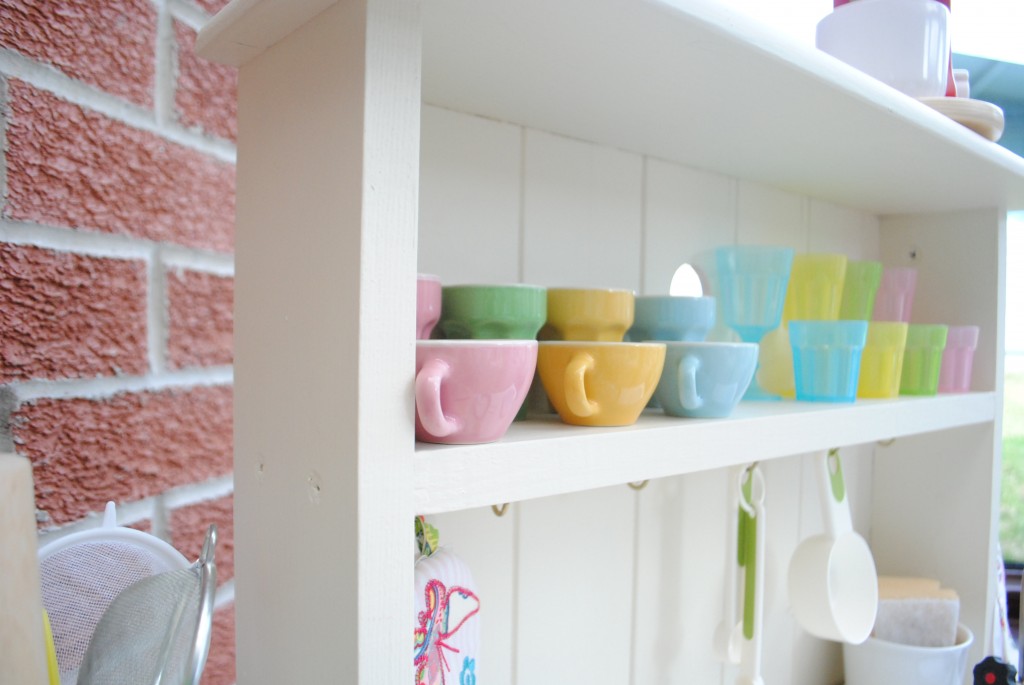 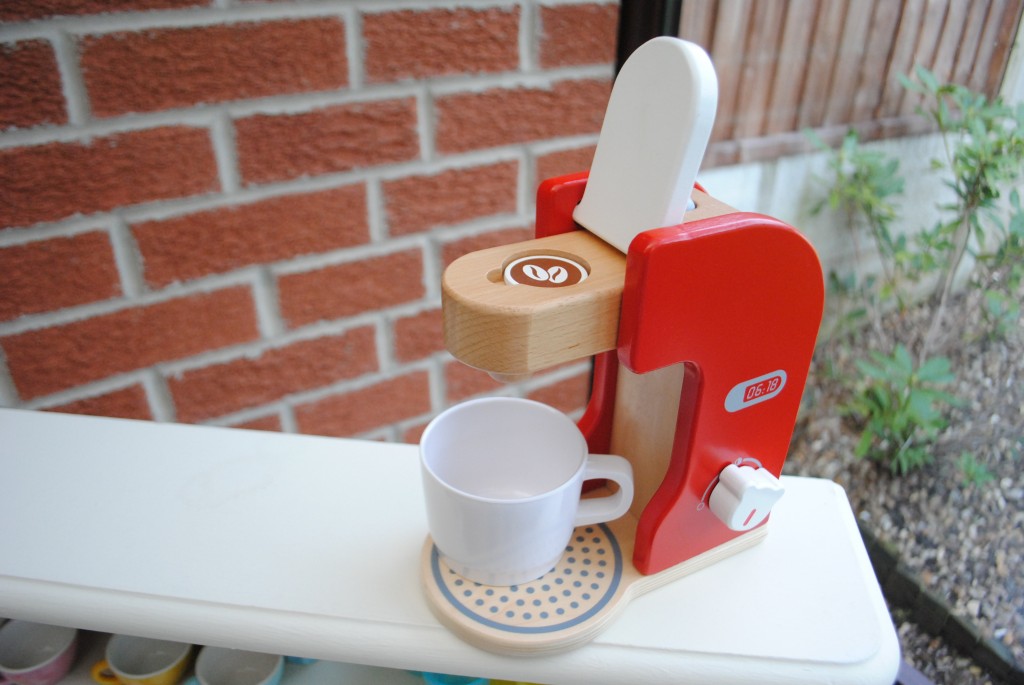 E had this little coffee machine for Christmas this year, she adores it and really likes that she has one like ours. It is by Viga and we got it from Amazon here. 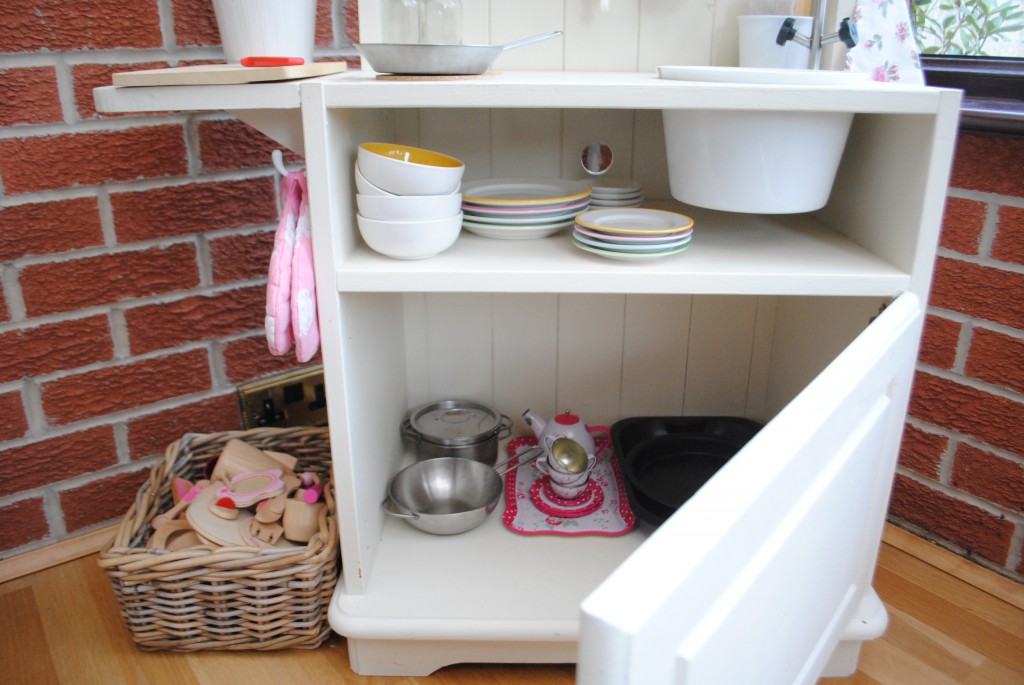 Inside the ‘oven’ there are numerous pots and pans I have picked up along the way when I have just spotted small ones. 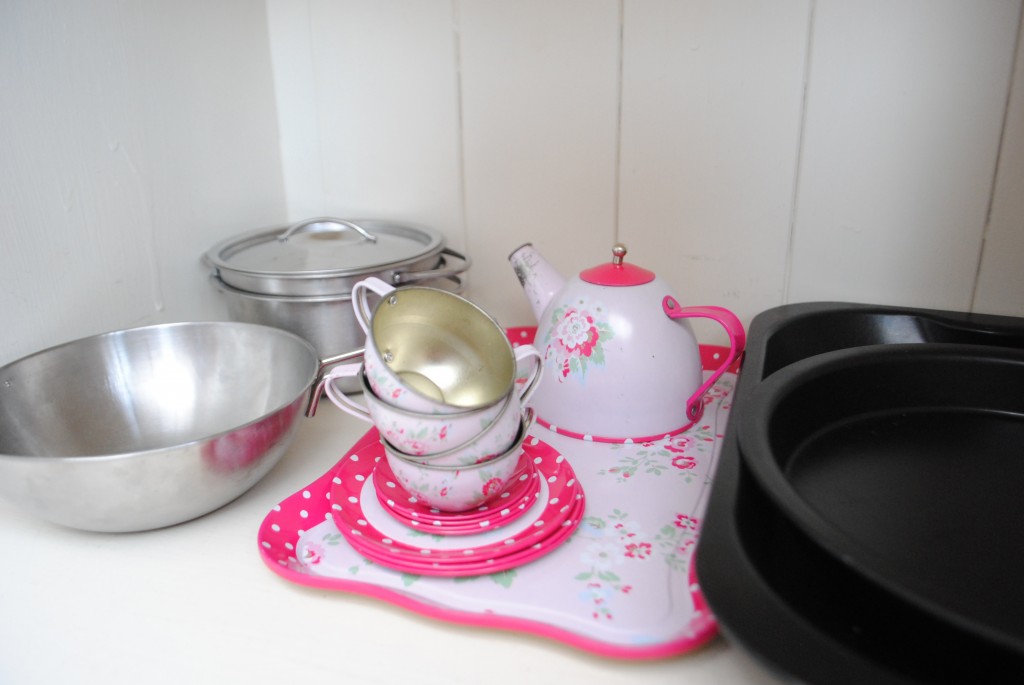 This tin tea set we love and was a present the year we actually made the kitchen, I can’t actually find it now so maybe they don’t do it anymore but we still enjoy delicious air tea from it! 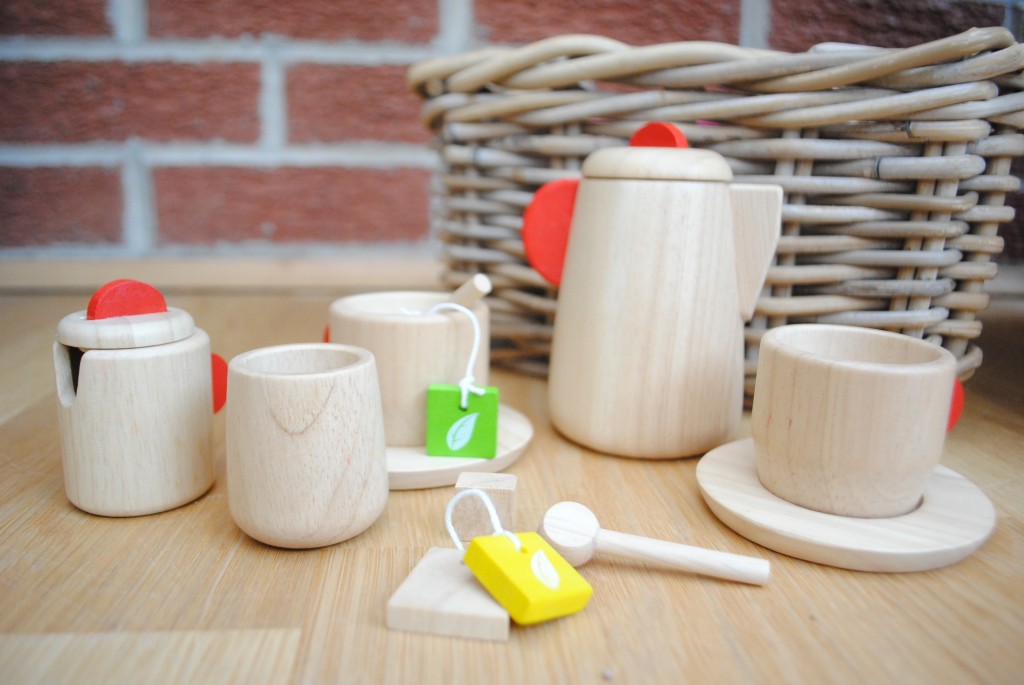 We do have quite a lot of tea sets but this is by far our favourite, again it was a present and we love the little spoons, the fabulous tea bags and of course that it is wooden. 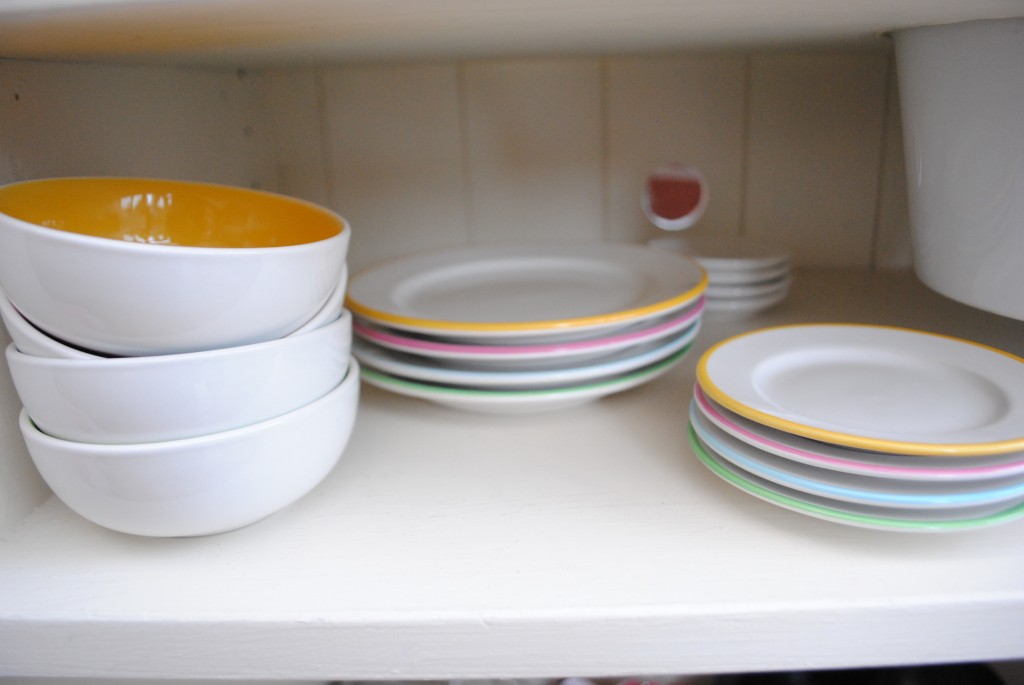 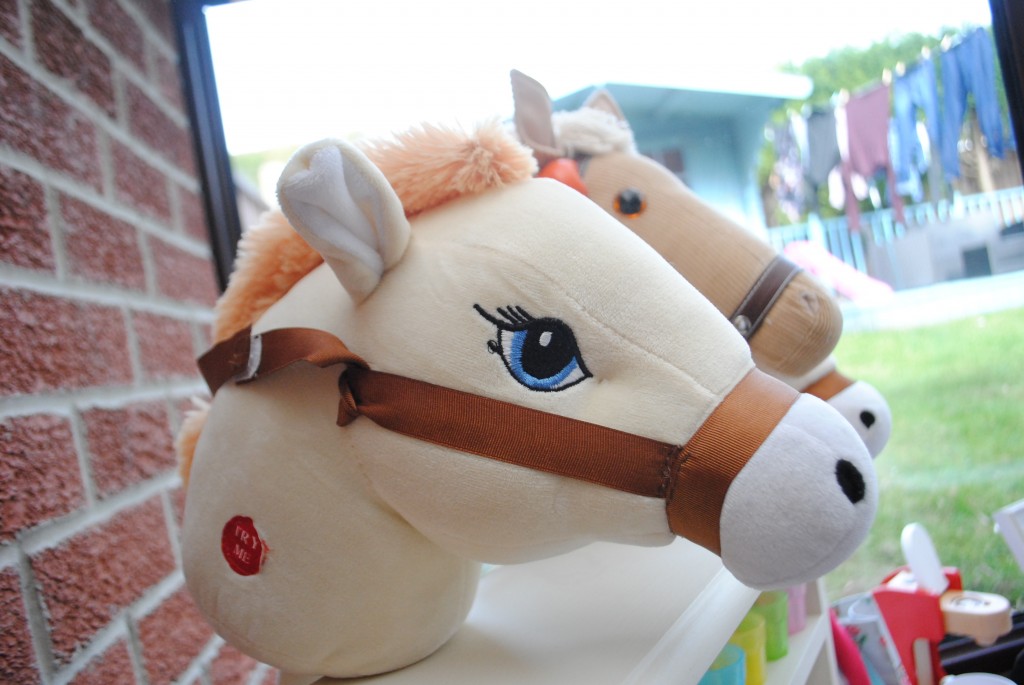 The Kitchen also teams up as a stable for our array of hobby horses which is always handy – please forgive the washing in the background! 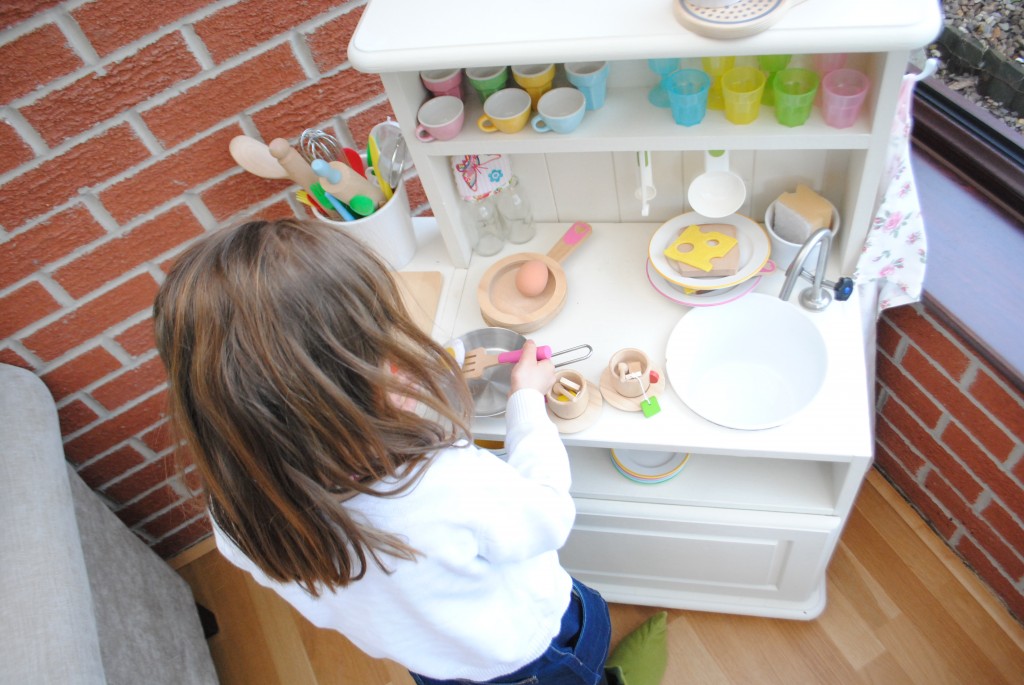 And of course THE most important part of this whole process…..Little E. Who still loves to make me 400 cups of coffee, eggs on toast and show me her cooking skills. Oh and to wash and tidy up afterwards – not sure where she gets that from 😉

We couldn’t be happier with our creation. It truly was one of the best things we ever did and gave me the confidence that I could turn my pinterest inspired ideas into reality, for me and for my children, and that they don’t have to be naff or expensive in the process. People always ask about it and I have had so many nice comments over the years that although it makes me quite shy to say I feel really proud. And really it is so simple, anyone could do it.