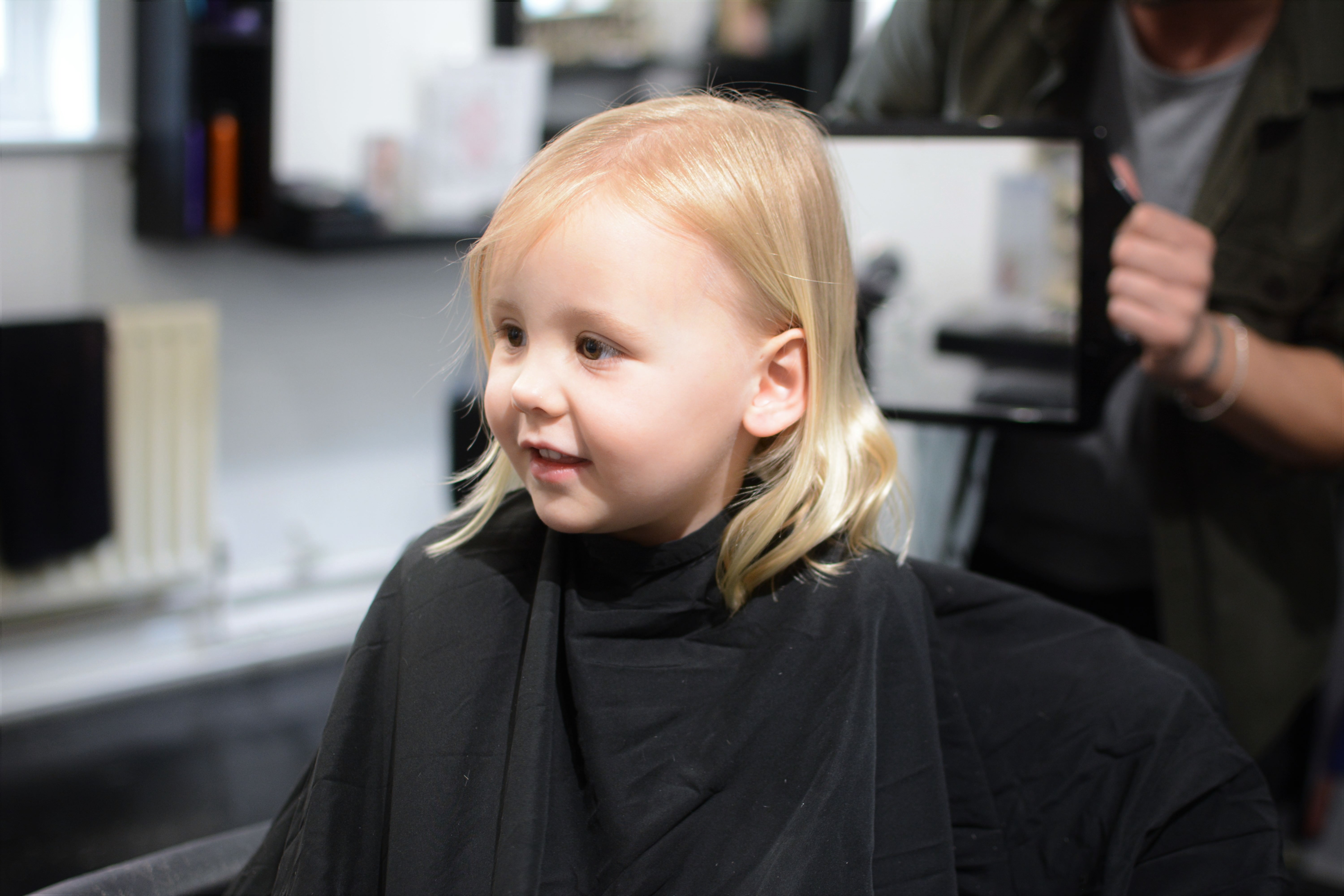 If you have read my blog before or follow me on social media you will no doubt know that the littlest lady of ours is a surprise blonde. When she was born with the same mass of jet black hair as her sister there was no doubt in my mind that her hair would go the same way, mousy, to brown, much like mine and (as I thought) Eddy’s too. But no, she wasn’t destined for that and as she lost almost all of that baby hair it grew back as blonde as blonde could be (apparently just like her Dad!) There was no mistaking it and a part of me always felt like somehow she looked like she didn’t belong to us brown haired family. But then it is also so perfectly her and I could not imagine her any other way. She is a maverick, my rainbow, my wild child and this is no different.

It is however partly to blame for the fact that she has got to 3 years and 3 months without having that shiny blonde hair of hers cut, ever.  Even writing that down seems like I have executed some kind of parenting cardinal sin that I should be ashamed of. A selfish act of a mother just not wanting to risk the blonde hair changing or the curls becoming a distant memory. Of course part of the reason is just that I have not gotten around to it in our ordinary busy lives, however it also is because that messy, half curly, half straight hair has become as much a part of her as her crazy personality and her birthmarks that sit so innocently on her arm; but I knew that enough was enough. So I finally booked her in.

I have to say I didn’t trust anyone else except for my own hairdresser. I just love him and before I found him a few years ago I was never happy with my hair, (literally every time I had it cut I hated it and washed it as soon as I got home, I would go to a new hairdresser each time and put it off for months, sometimes years!) Now though I look forward to it, he gets me, he cuts it well and I not only always love it but now I question how the heck he can style it so well and spend all the time inbetween cuts wondering what I am doing wrong!

So on a sunny Wednesday afternoon I walked into that familiar salon with Roma’s hand clasped tight for both her comfort and mine. The unfamiliar apprehensive feeling in my stomach. I knew it would make her seem older, she may lose that bright blonde that had consumed me as it gradually started to turn brown. Yet so slowly that I would barely notice until it was too late to take one last look. The curls that have defined her messy hair for the last few years would be merely sat there sadly, abandoned on the salon floor.

She sat so quietly for a minute. Shifting to get comfortable on the soft booster seat, gown draped around her shoulders and encompassing her entire body no sign of little feet just a floating head of black material to catch the strands that would soon fall. A faint rustling sounds could be heard as she held tightly onto her green car through the gown aswell as reaching out for my hand and listening intently to our distant chatter of life catch up and what he would do today.

Despite her apparent man aversion (she seems very untrusting of every man apart from Eddy for some strange reason.) He put her at ease and as much as she wanted to hold it in and pretend that she was shy she just had to blurt her life story out at random intervals when his questions were just too tempting not to answer. She did so well, she sat still, listened to him and although I could barely walk back without her wondering where I had gone, she never once moaned or cried and when it came to the end where she got to see herself in the mirror back and front she had the biggest smile on her face. She was a big girl!

She really does look older. Those 30 minutes and just a couple of inches seemed to age her a few years more than any other time and I may have had a little tear in my eye on the way home (ok ok I full on bawled!!) But we are coming to that stage in her life where she is growing up in front of my eyes more than ever. Not just physically this time, but her entire personality, she is making a whole new world for herself following confidently in her sisters footsteps, and beyond. Sometimes I feel sad about it of course I do, but mostly I feel really really proud. She takes life in her stride with joy at the forefront and in that makes me a better person without even realising it.

We spent ages running around and picking flowers at the back of the salon and I took these photos which might be some of my favourite ever. She has this innocent face at her age where I can truly capture her spirit. The frilly jumpsuit contradiction that has tigers on, so perfectly her. She will always be my wild child, for now she still has straight hair growing over her curls that won’t give up. Her hair remains blonde and she can almost always be found with it wafting freely around her face or caught in her mouth depicting her entire personality in one gust of wind. Nothing really changed, yet everything did too.

The next time won’t be so big, it will become just another of those things on the to do list, but this one was a milestone, a moment that I never want to forget…and yes I did take some of her hair home despite not really knowing what to do with it as it seemed fitting that I would. Truth be told I will probably weirdly and creepily treasure it forever. Until she is older and makes fun at why the heck I kept that! 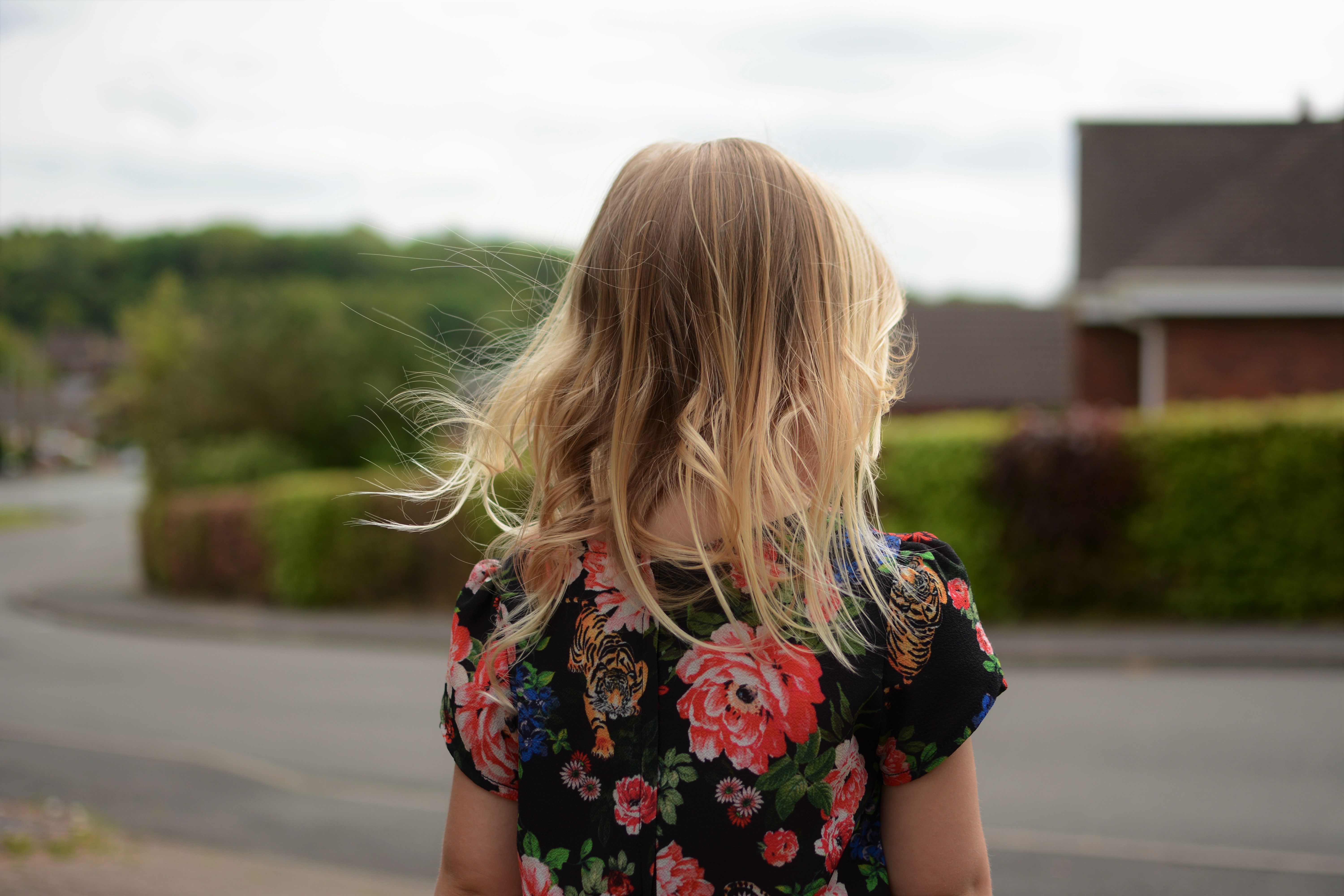 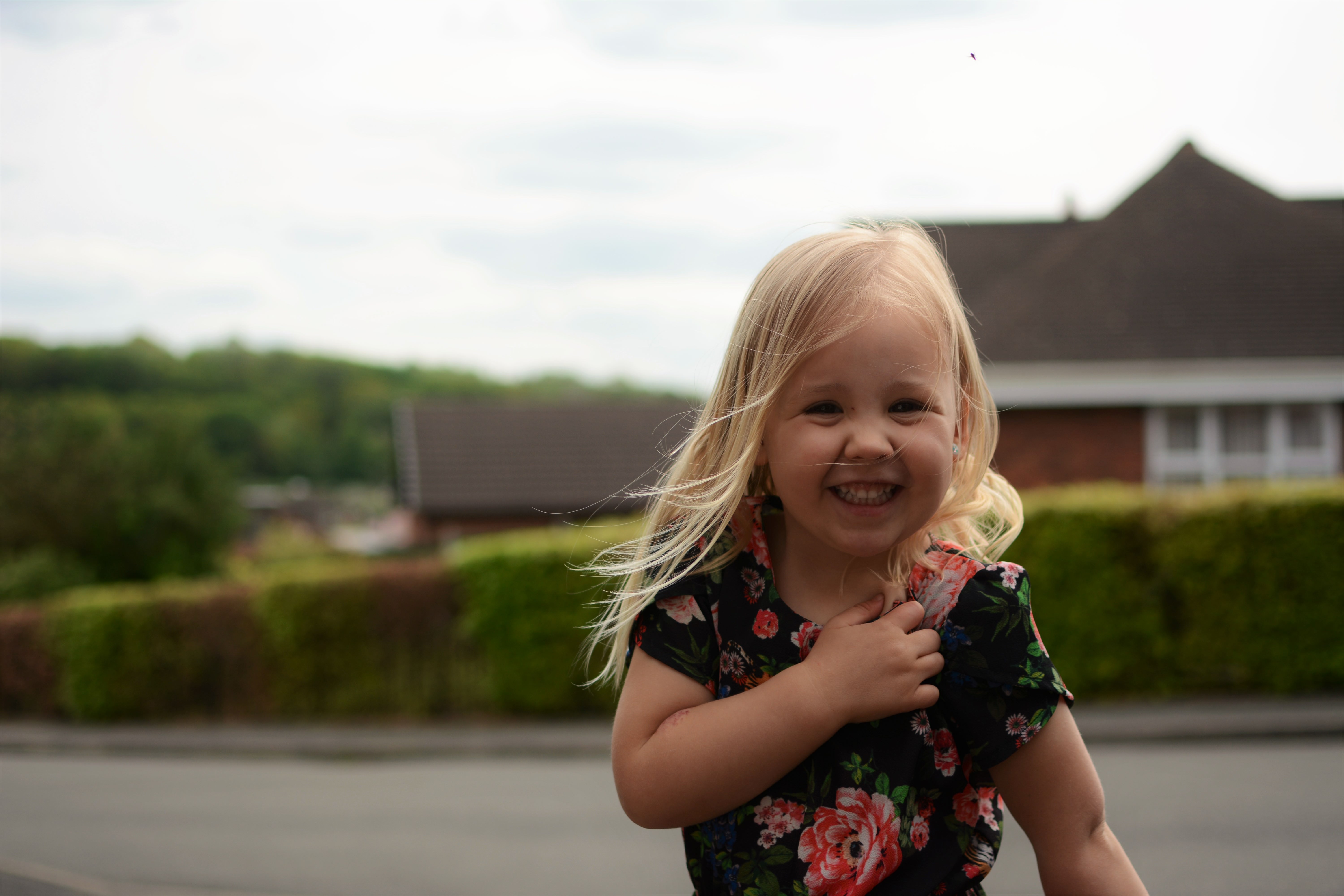 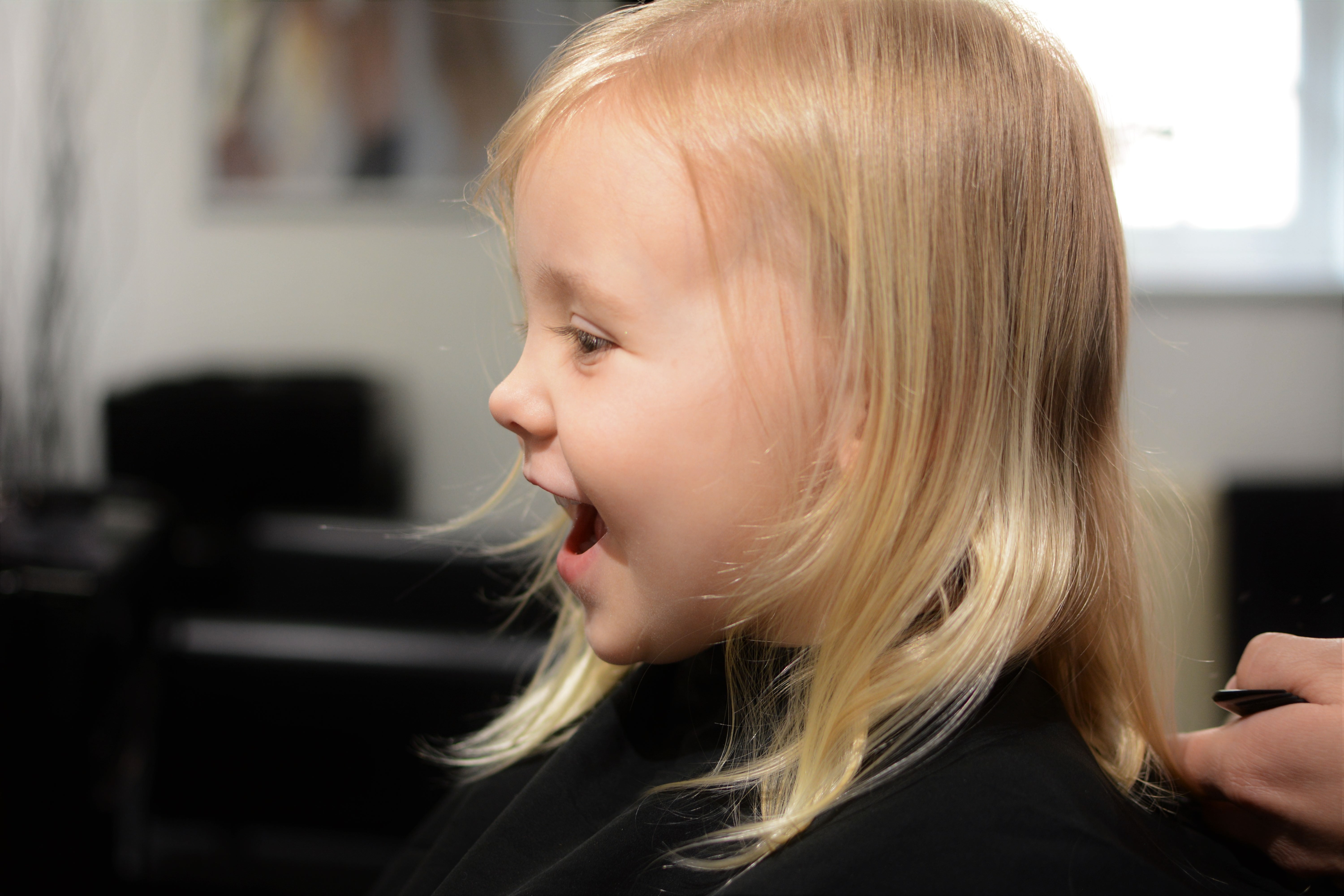 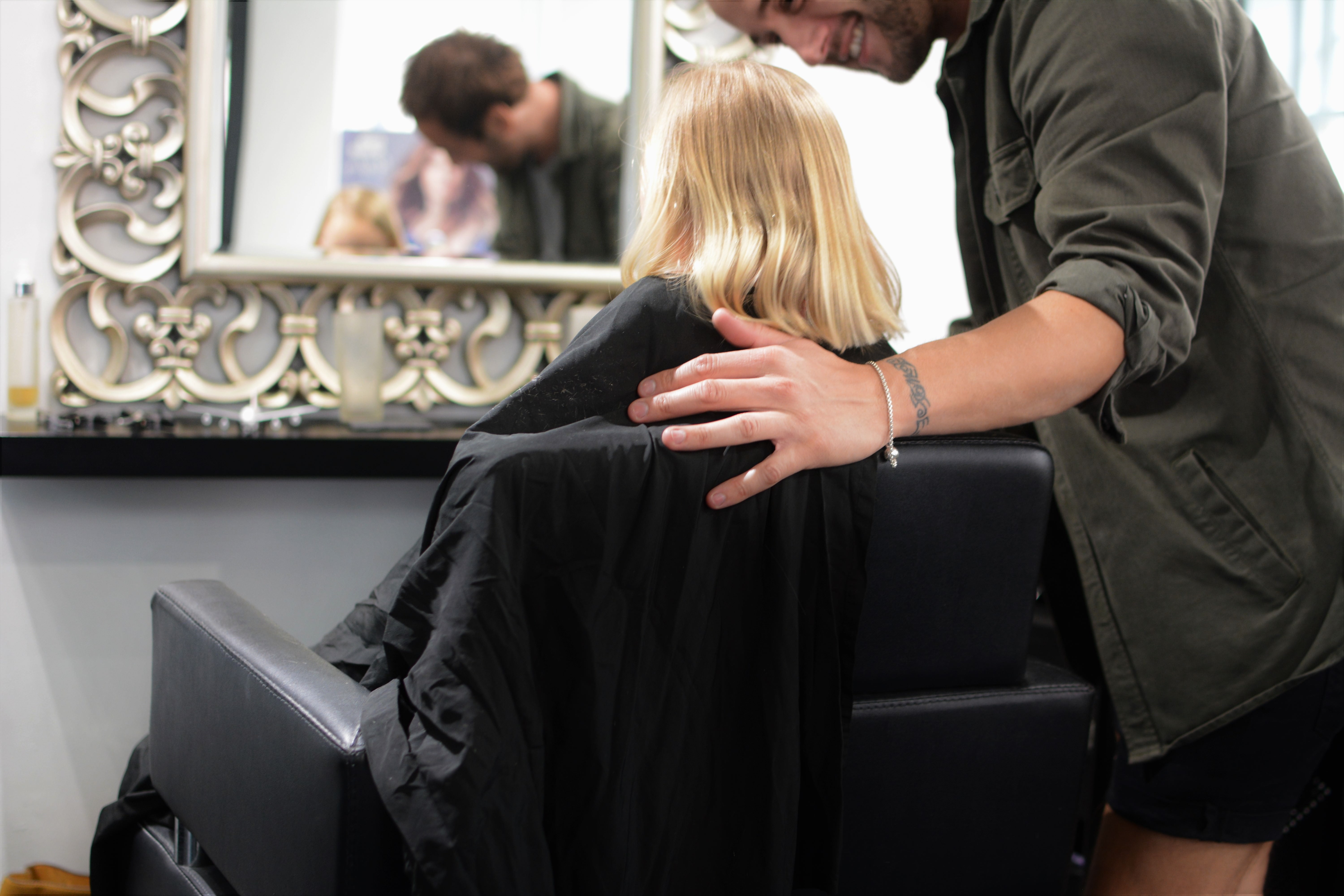 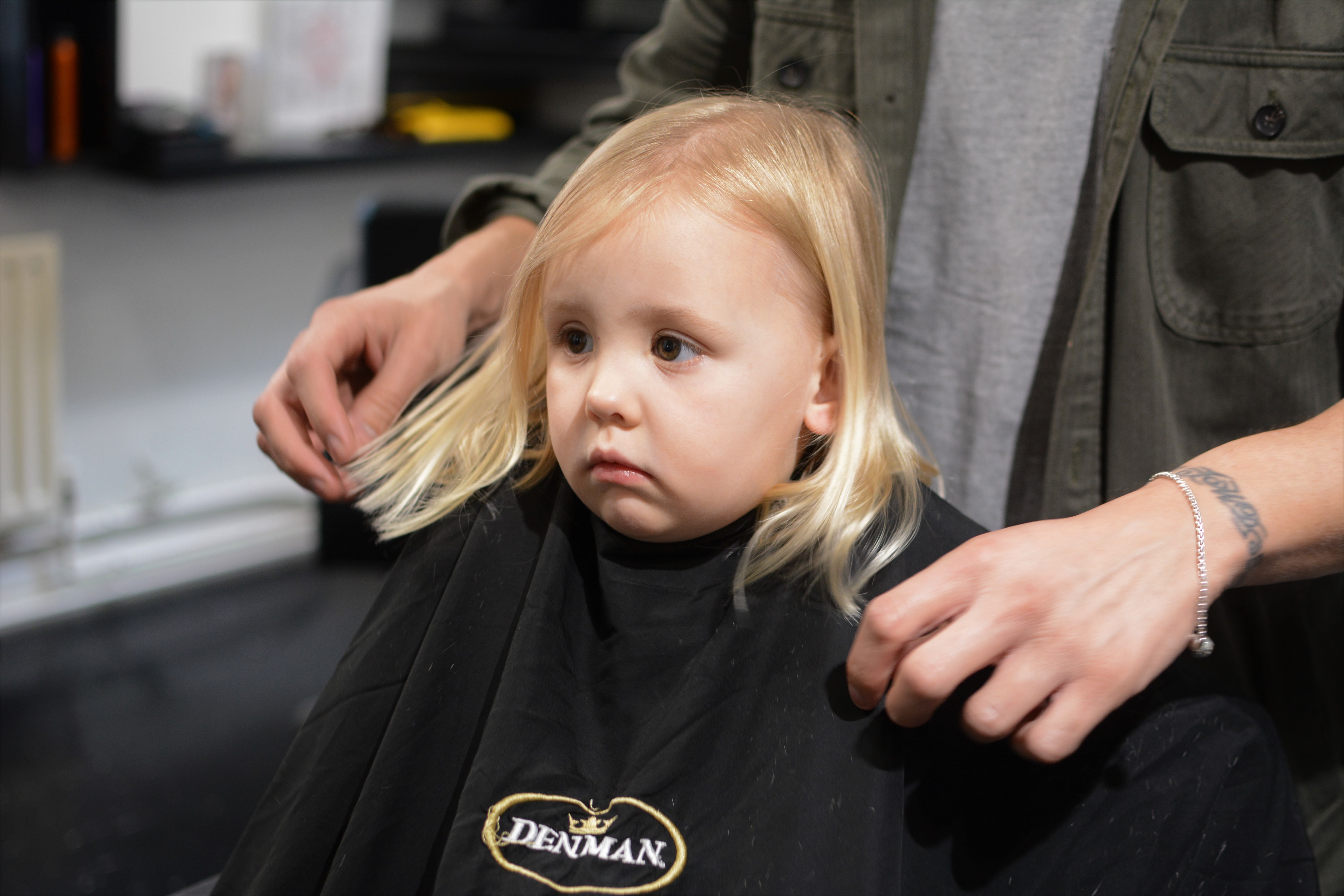 This photo really makes me laugh and I couldn’t leave it out. This is when she was feeling unsure but as you can see she got into it in the end! 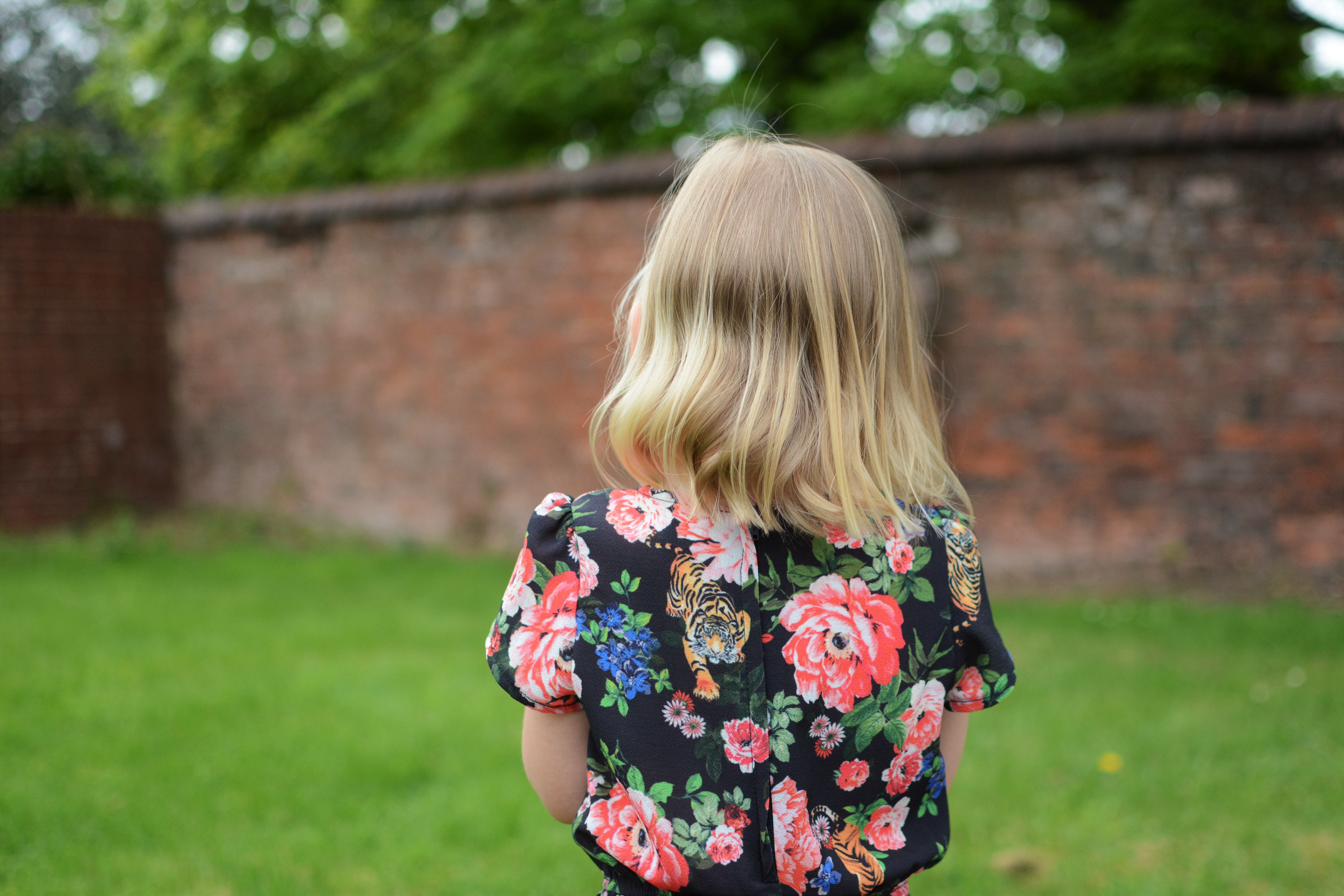 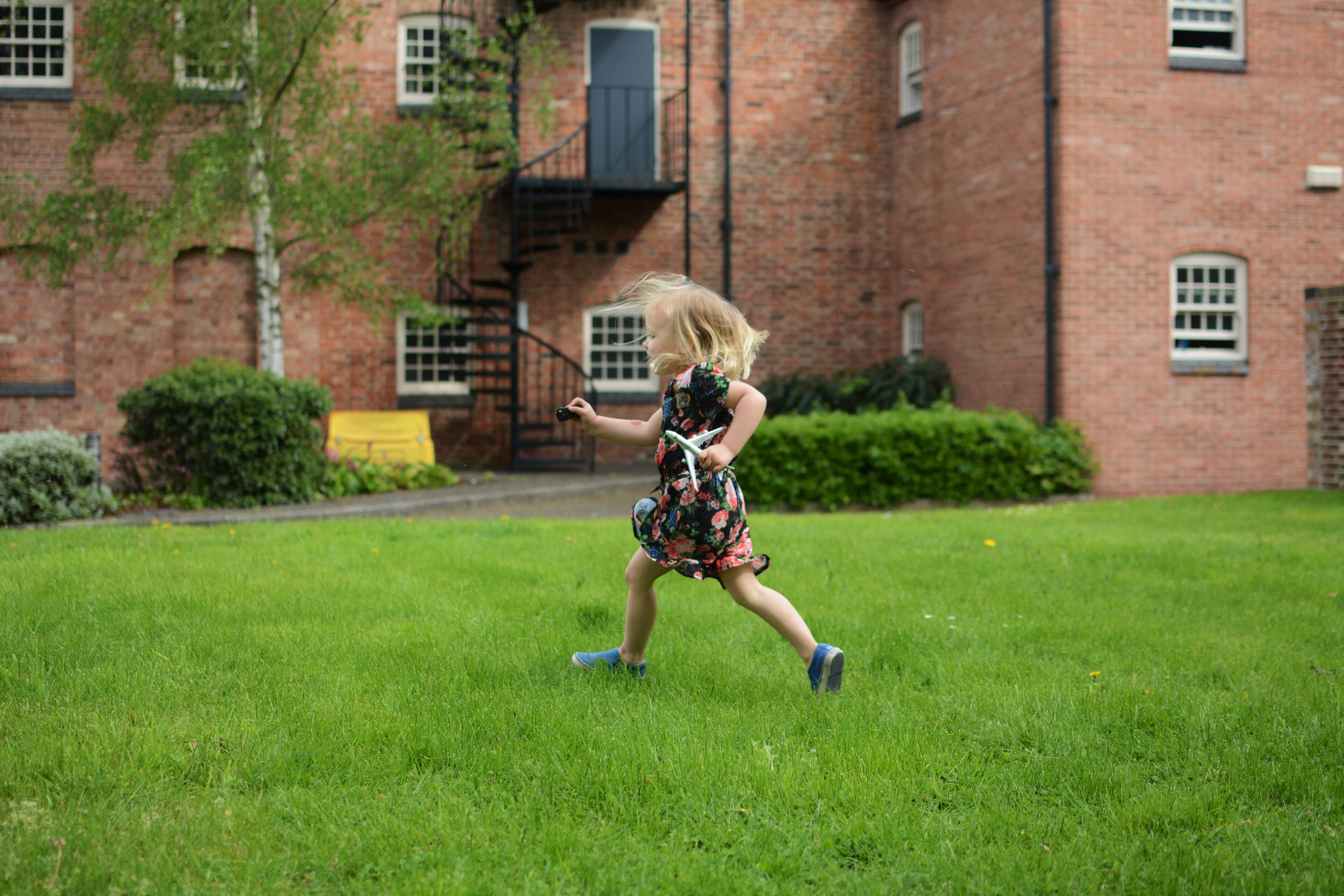 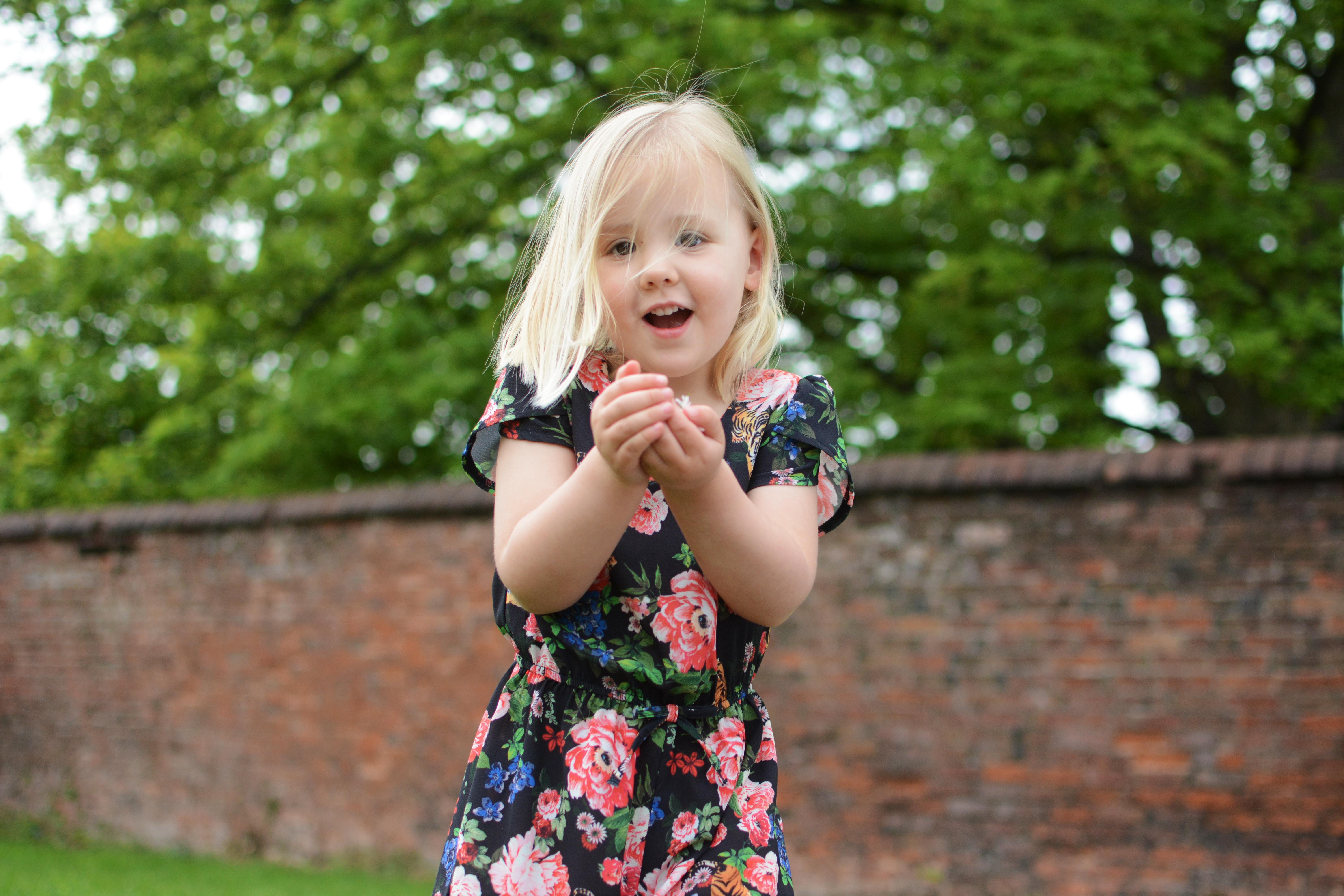 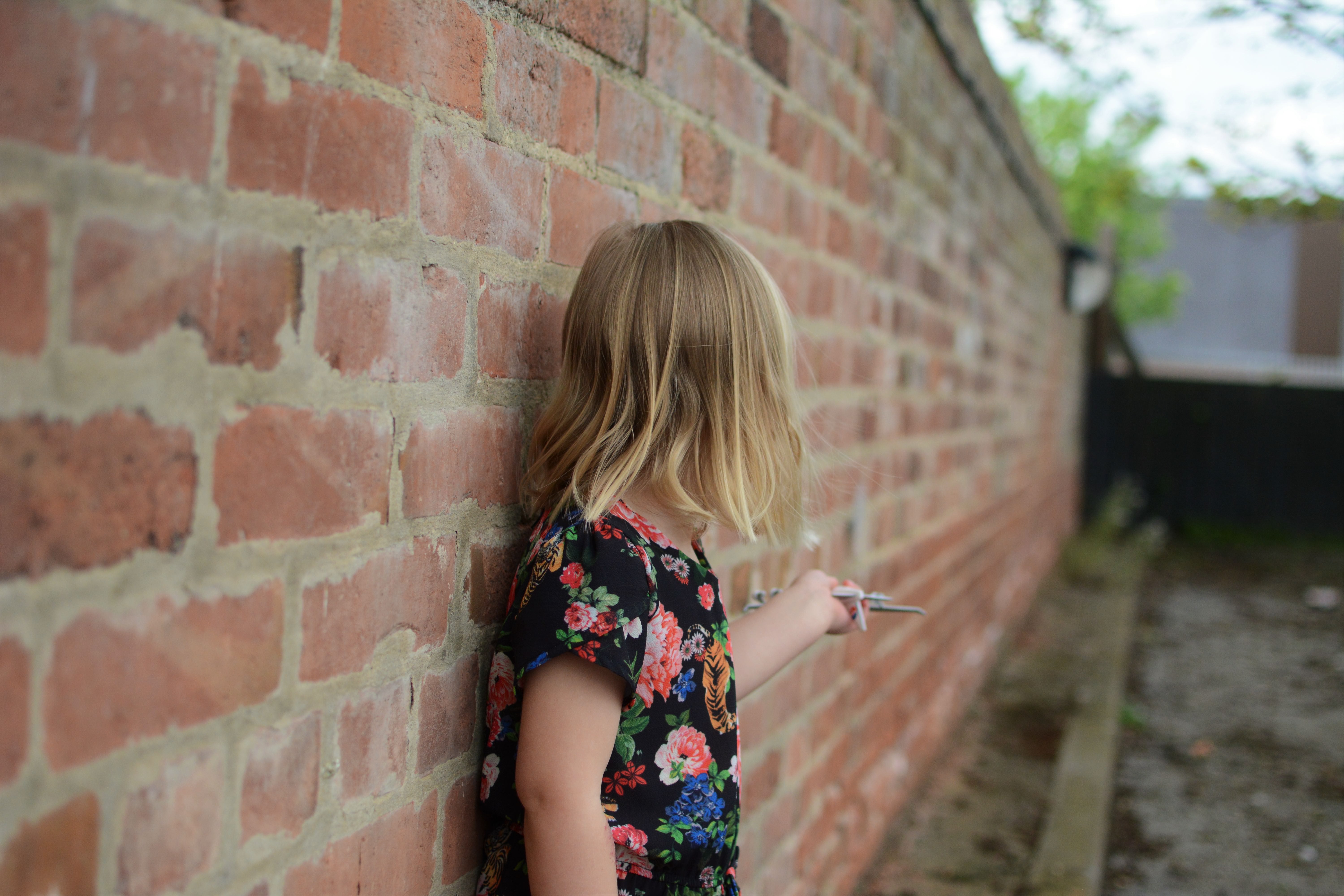