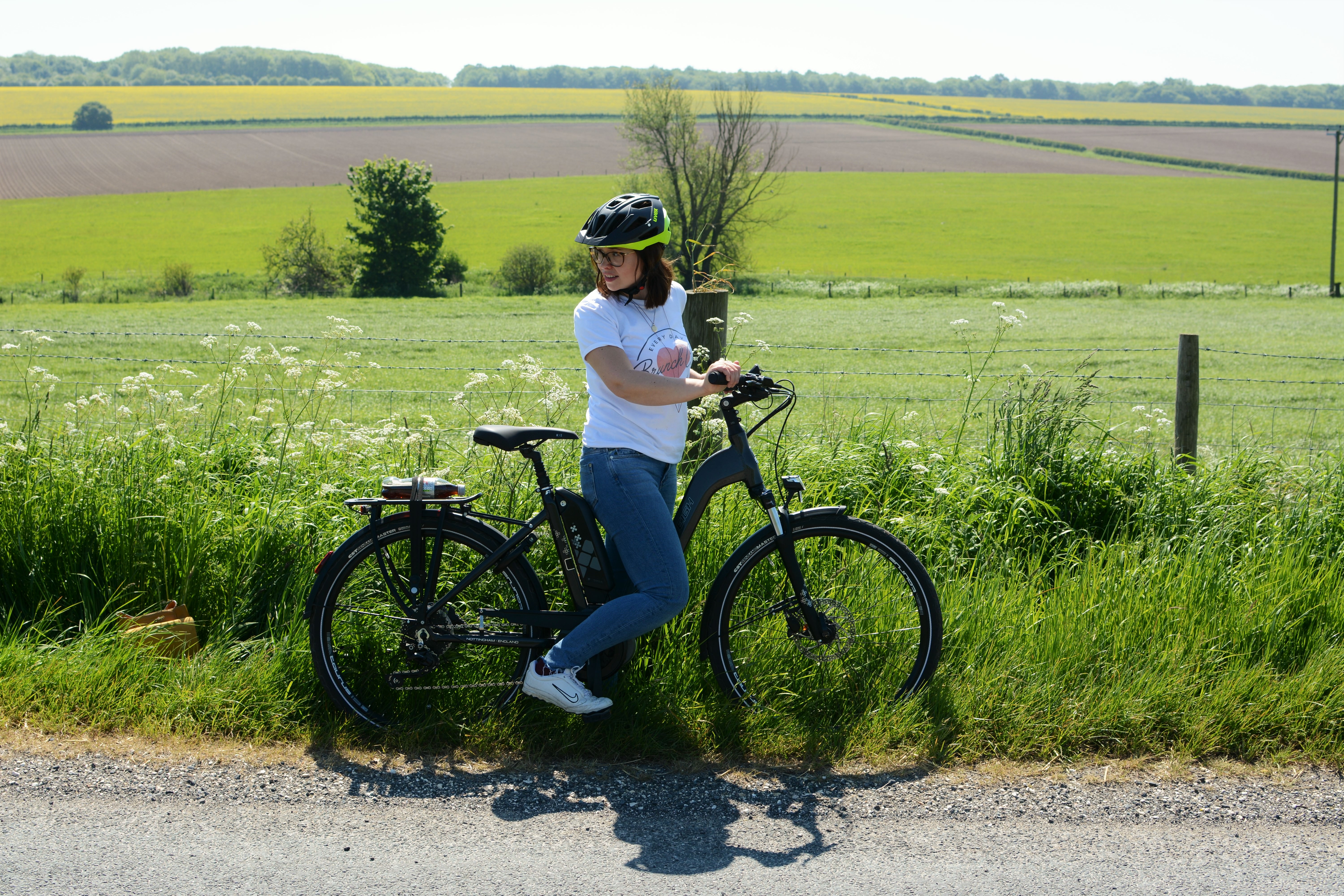 As I rode steadily along the country lanes, my legs repeating the same cycle of motion over and over again with ease almost instinctively despite the years it has been since I was last on a bike. Nothing but an expanse of colourful fields as far as the eye can see with just a slight hint of another family disappearing over the brow of the steep hill ahead. I glanced at Eddy by my side as I felt the wind (a pretty serious amount of it) in the hair that stuck out below the unfamiliar helmet nestled securely on my head, the warm sun beaming on my bare face that couldn’t help but smile. I could hear the faint distant hum of chatter coming from the trailer Eddy pulled behind him as the children lived their best lives chatting away to each other completely casually, void of effort, and I found myself noticing every little thing. My body was busy but my mind was free as a bird. For the first time in a very long time.

We were in fact taking part in Cyclefest, a cycling event held this year in the beautiful Yorkshire Wolds on a perfectly sunny day as part of the wider 4 day event ‘The National’ which is the largest of three of the Caravan and Motorhome Club events held throughout the year. We had been invited to take part in the Family cycle by Experience Freedom whom we have worked with previously and despite my initial nerves (mostly about the electric bike I would be using for the first time but also because I had been pretty poorly the few days before) as soon as I set off, I put foot to pedal, all those nerves dissipated with the buildings behind and made way for one of the best feelings ever, spending uninterrupted quality time doing a physical activity with my family by my side.

You see this doesn’t usually happen to me, due to a muscle condition I am often the one on the sidelines and I literally do not remember the last time I even got on a bike…one that wasn’t stood static in my garage that is. Eddy however is a keen cyclist and loves sport in general so to get to take part as a family was really special. It just goes to prove that anyone can do anything with a little bit of help. That help for me came in the form of my new wishlist item, my new one true love, the electric bike! Knowing my condition the lovely team at Experience Freedom got in touch with one of the sponsors Raleigh who very kindly lent me an electric bike for the ride, and in fact Eddy too, given the steep hills (it is Yorkshire after all) it was probably a good thing as he had the extra job of pulling both of the girls in a trailer too!

The 8 mile ride took us just over an hour with a steady ride, some stops for photos, a drink and to really take in the beautiful unspoiled views. We didn’t want to rush, to enjoy the journey and not merely the destination (a life lesson that at 33 I am still very much learning) and for me I just didn’t want it to end. With some 25mph downhill rides though, what goes up must come down and all that, it totally made up the time quickly. This was much to the amusement and joy of Roma shouting “weeeeee go faster” as loud as she could. And absolute horror of Eva who was shouting to slow down and asking specifically how fast it was now! Right there is the difference between my two children summed up in one sound!

As cheesy as it may sound it was one of those moments of pure freedom. My body wasn’t busy fighting what I can and can’t do, my mind wasn’t there having to make up for it, and I honestly couldn’t believe and still can’t, the freedom it allowed me not to have to worry about the consequences or how long it would be until my body gave in or I would have to stop allowing my family to go on without me, my husband to worry about how far I could go or the children asking why. I almost cried at the end when Eva said she was proud of me, that she hadn’t ever seen me do this before and that it was so nice that I was able to join in with them – despite actually being poorly too – and that is worth more than anything else in the world.

It just felt like such an inclusive event too, with all abilities from young children not only in trailers and bike seats but also on little bikes being encouraged by their parents and all the other riders alike, there were all manners of bikes, electric, wheelchair, old and new aswell as ages all the way up to grandparents too. A serious family affair. I even had a man who must have been in his 70s, an obvious cycling pro, talk to me about drones and cameras at the top of one of the hills whilst waiting for his wife and even took a couple of shots for me, the sense of community really was lovely. If however you are a keen cyclist and not an avid ‘get some help from electricity’ fan then there are sportive rides too which I am sure Eddy would love to give a go, I will stick with the gentle family one though for sure. 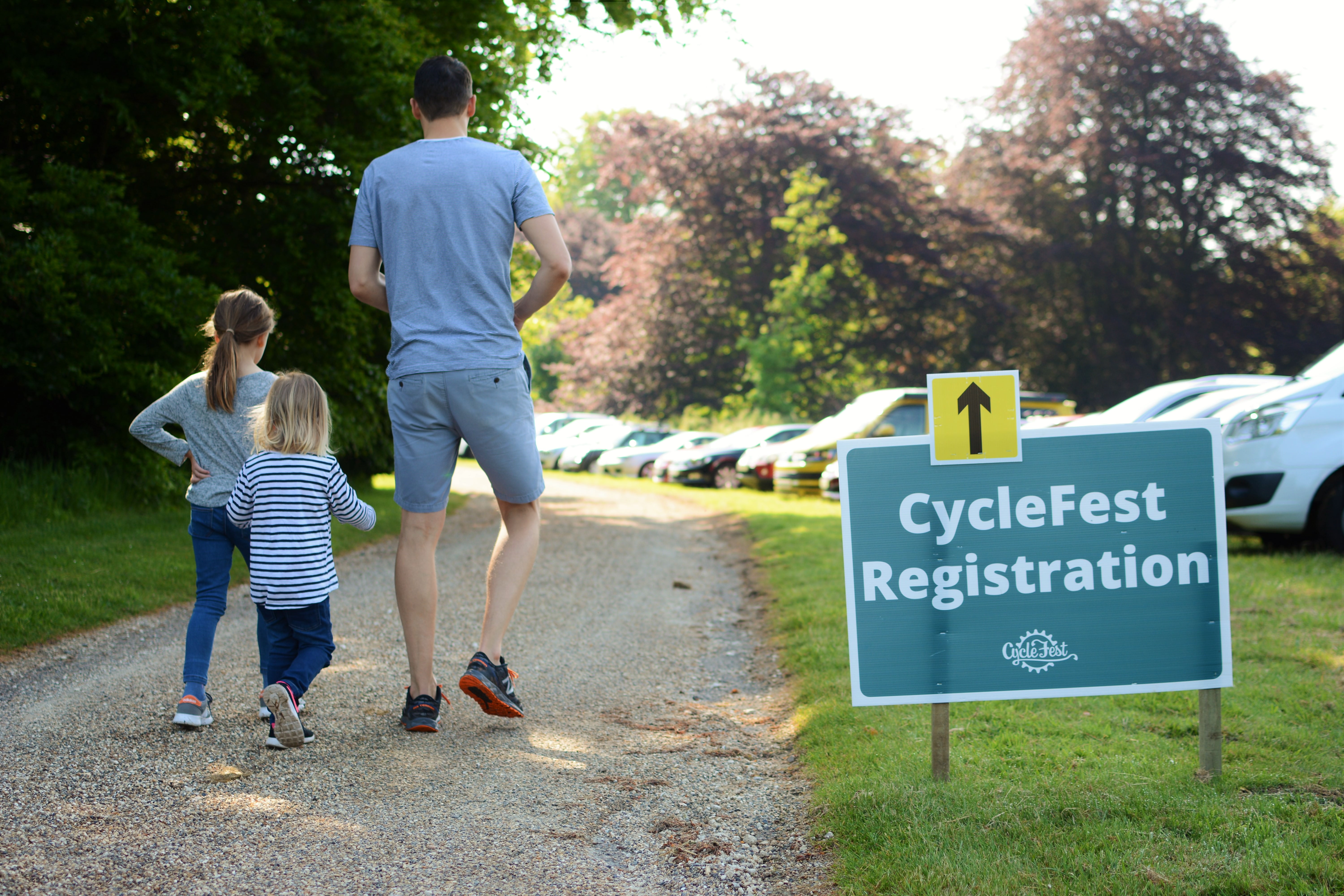 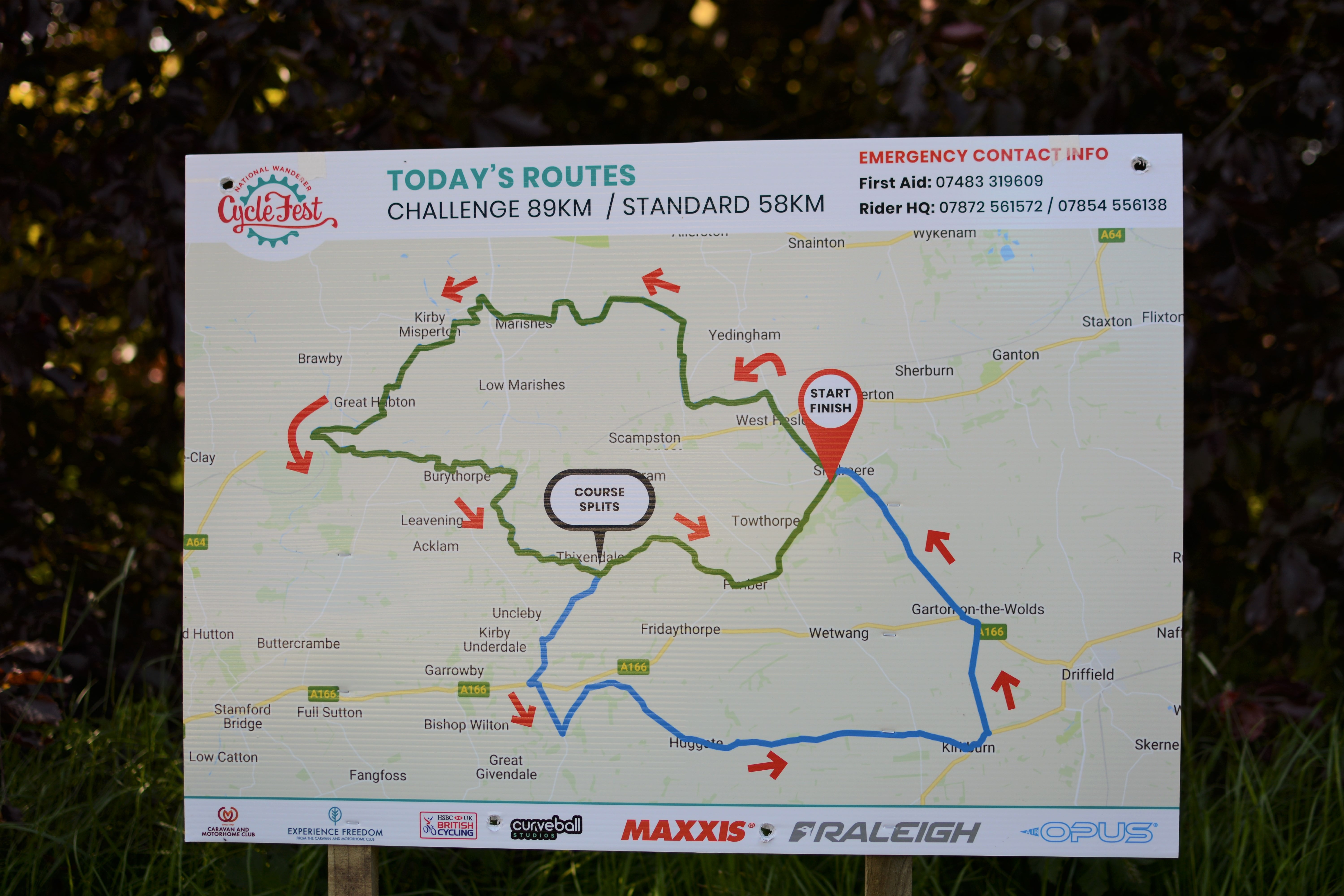 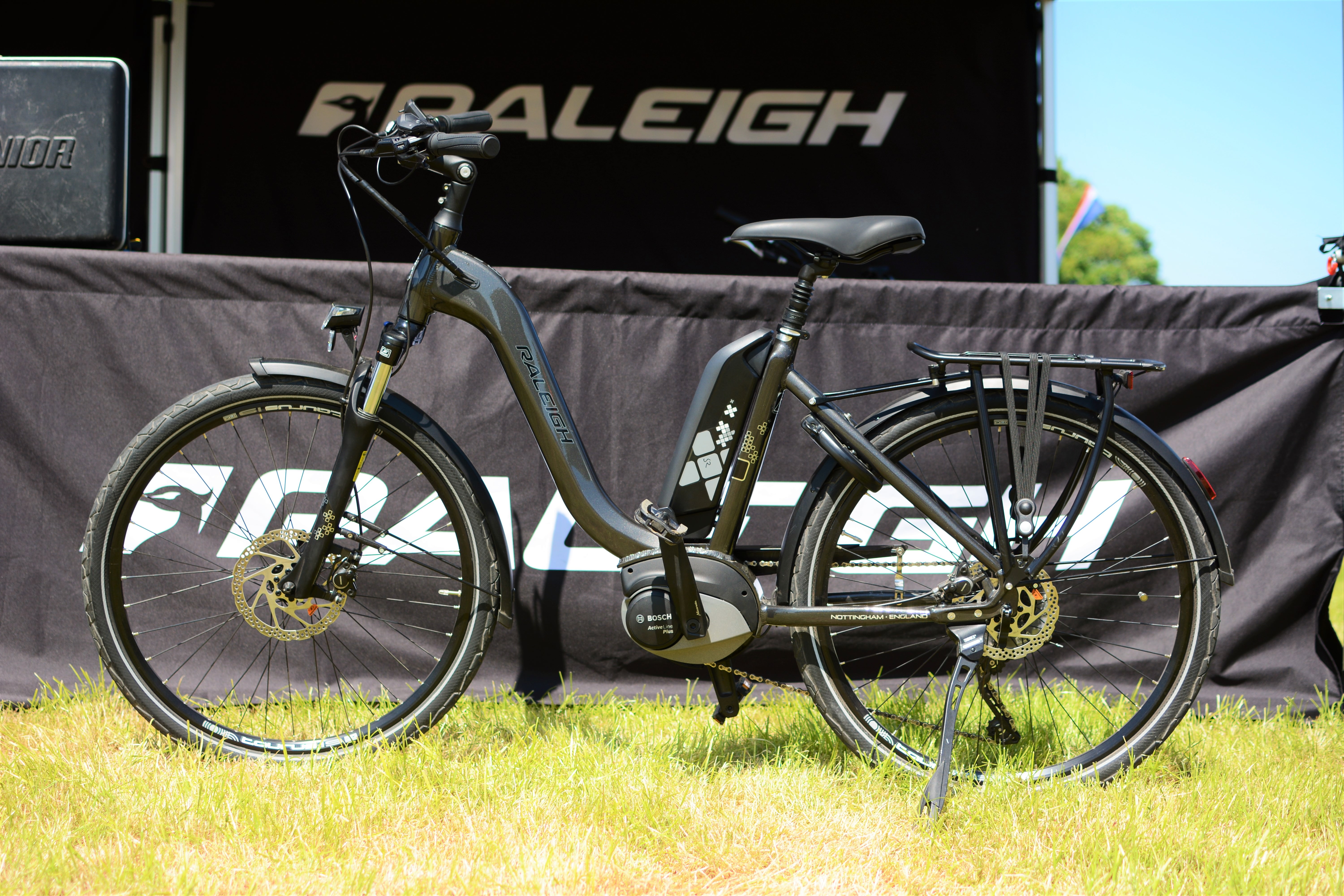 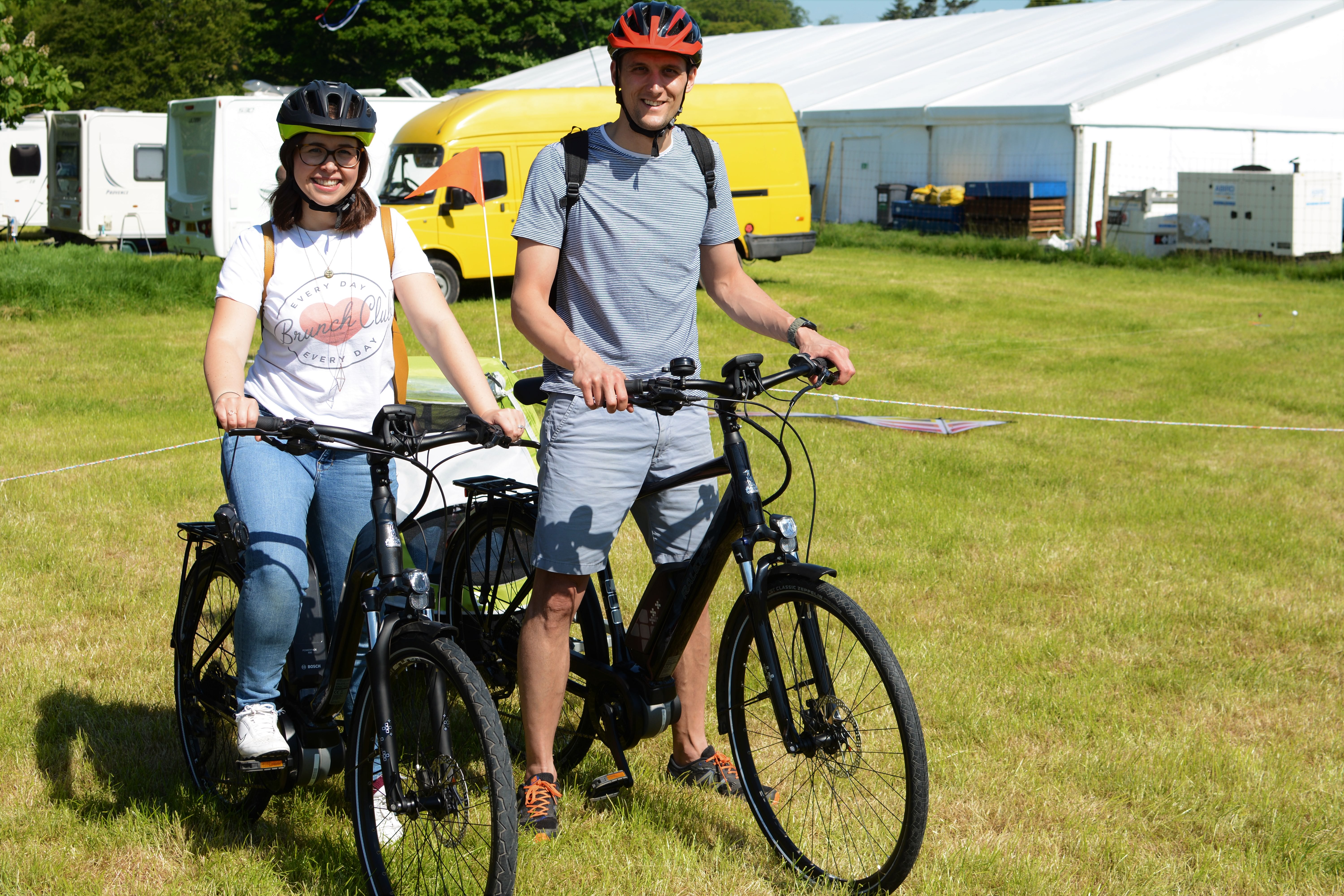 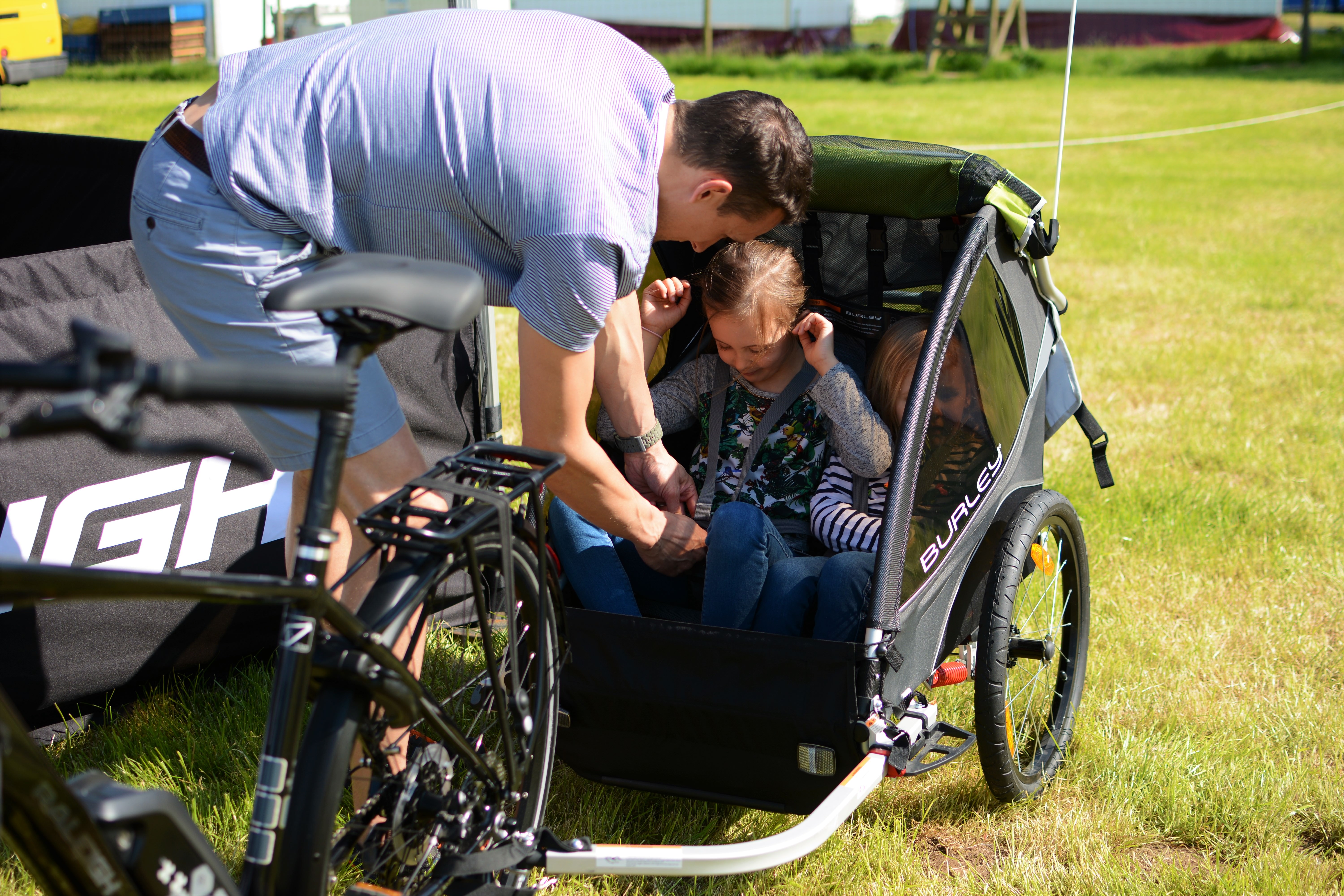 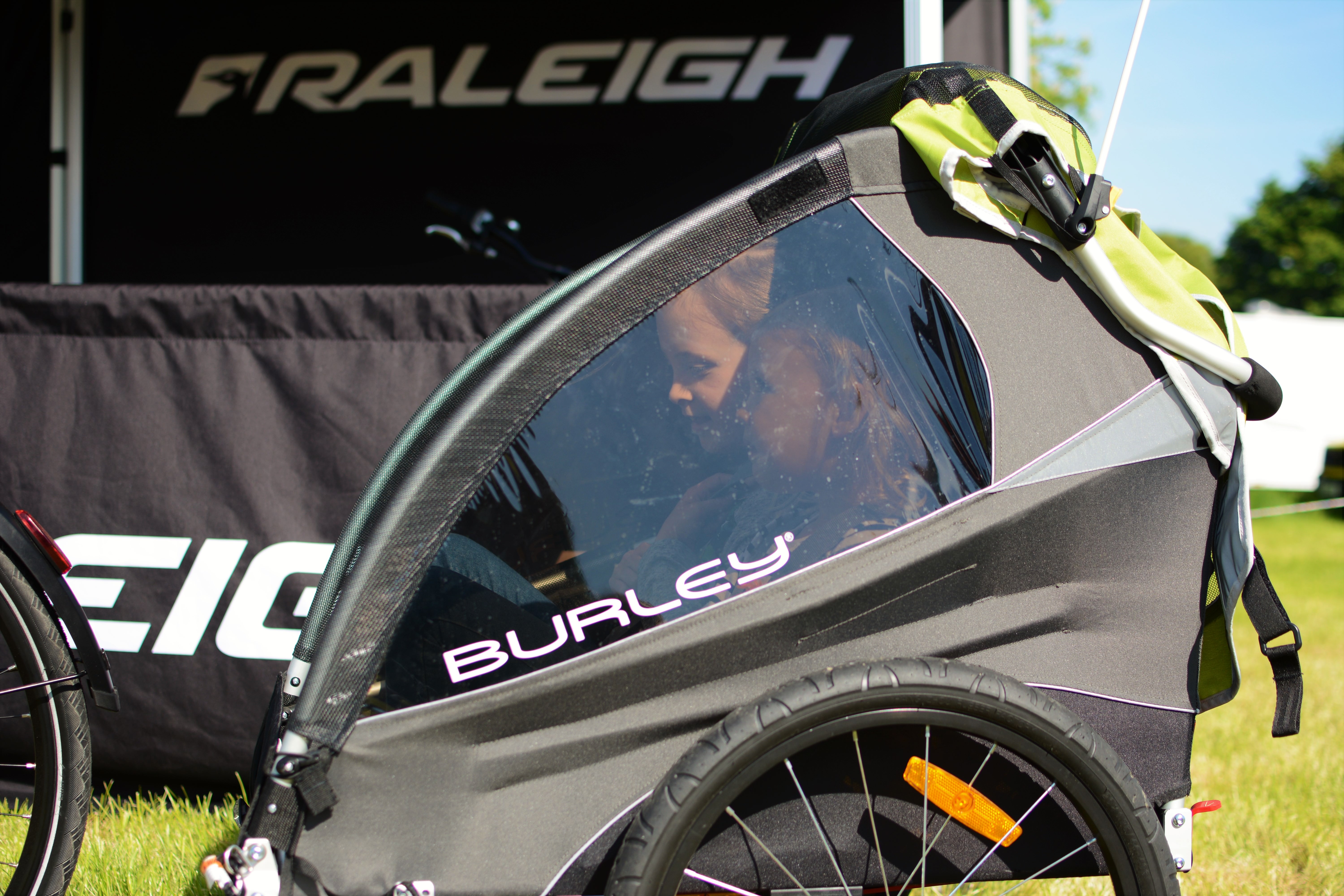 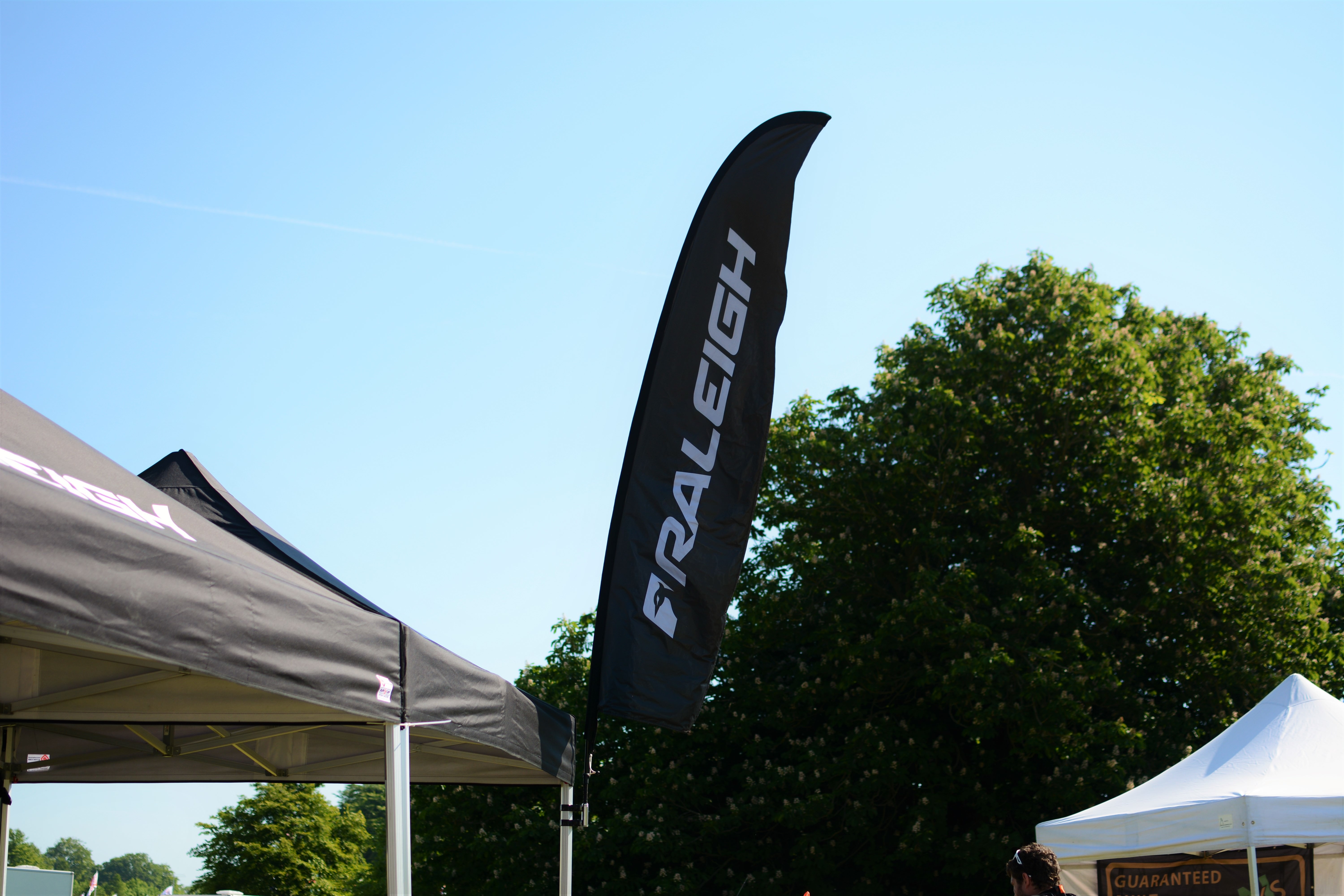 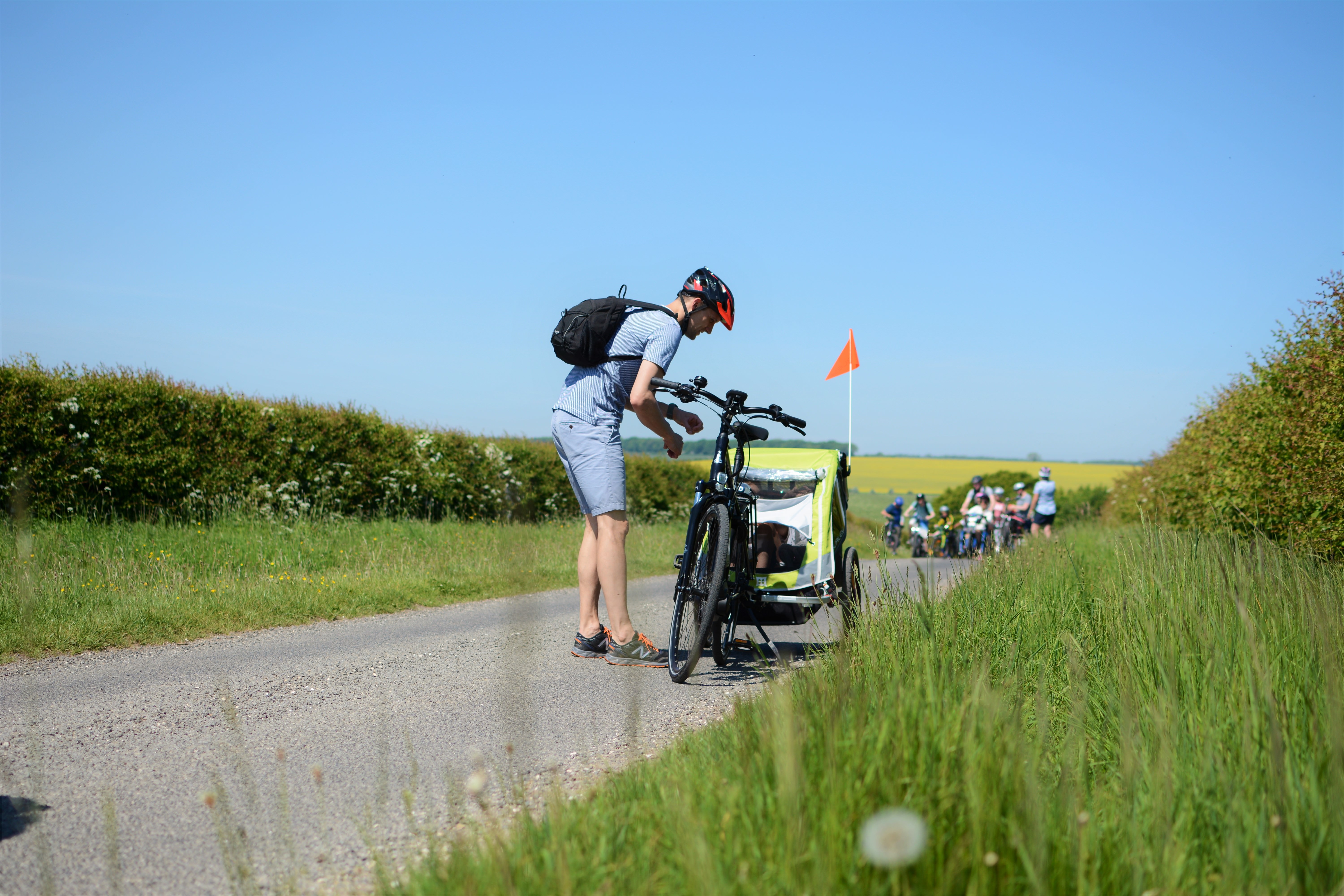 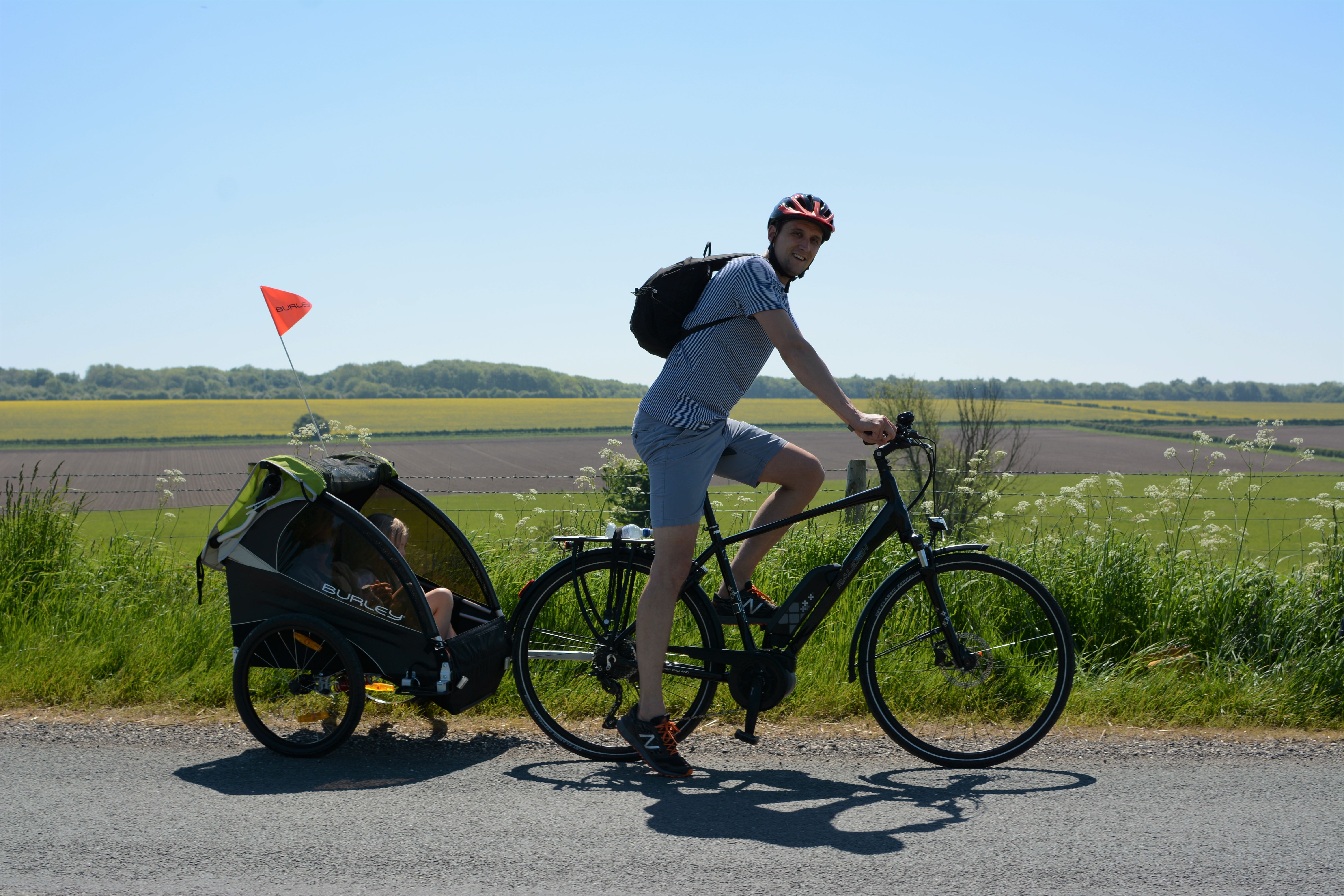 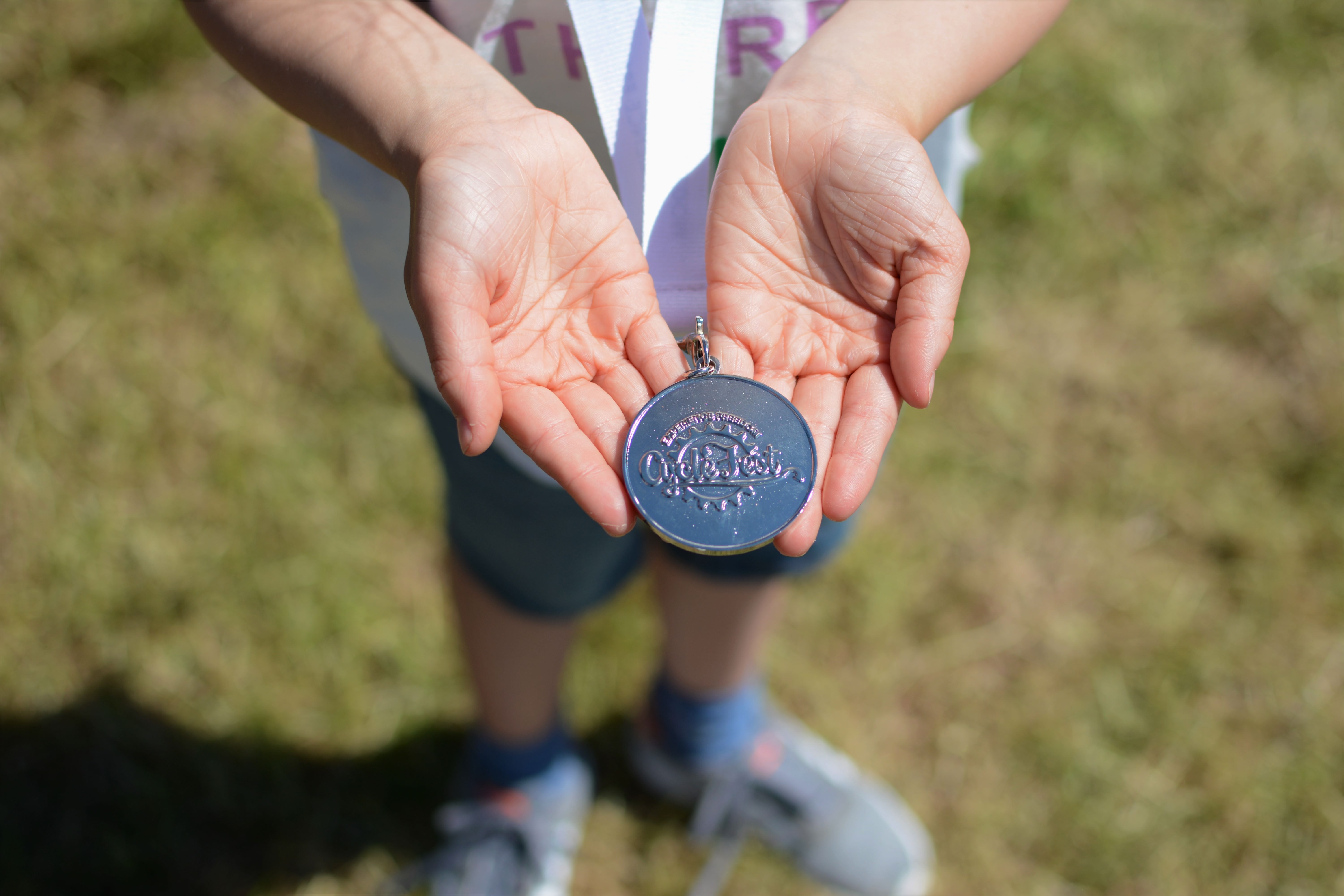 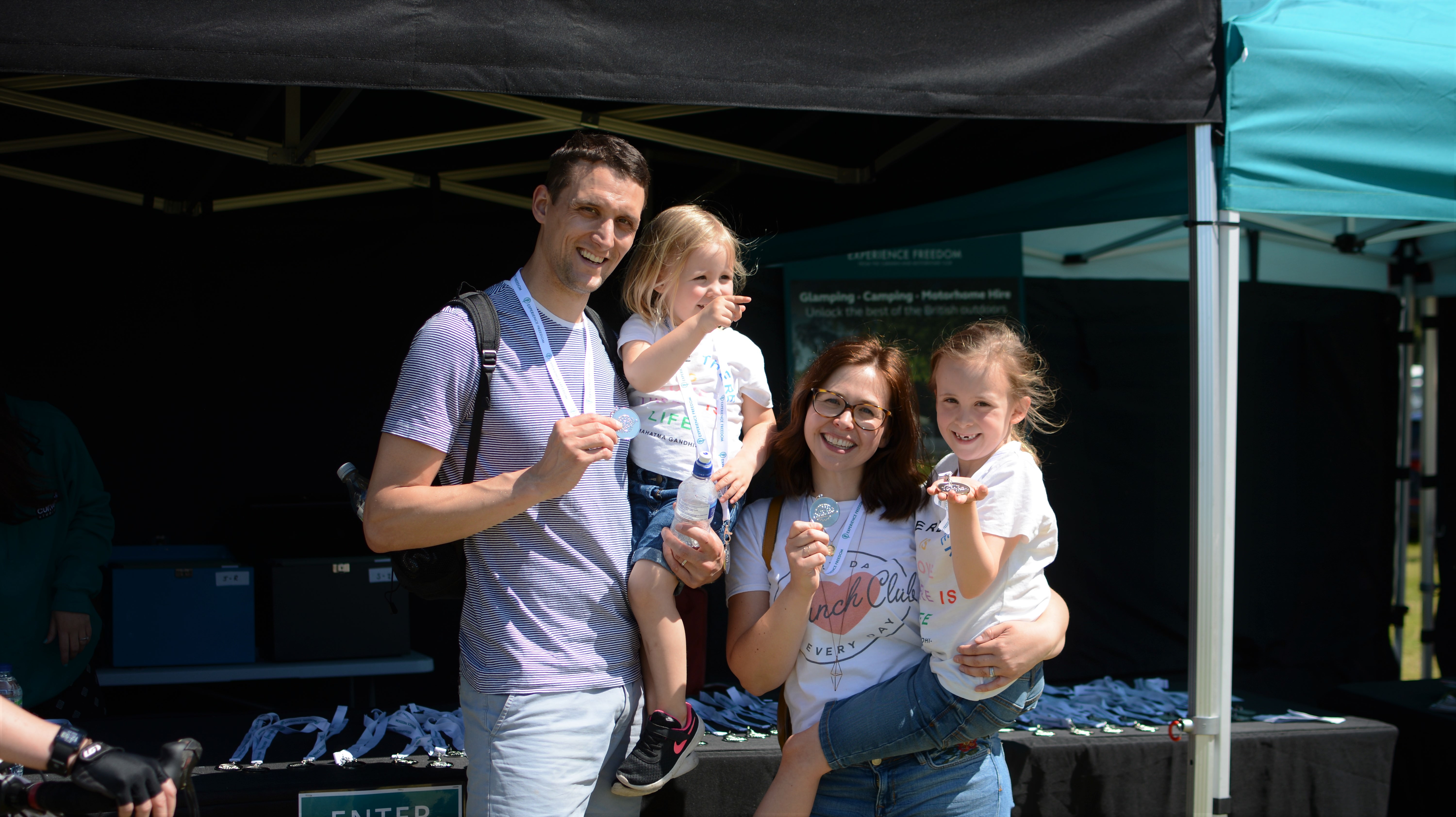 Of course the event isn’t just about cycling and although I definitely thought that was the best bit of the day for us there was ‘The National’ ripe for our exploration after. We collected our medals and reluctantly returned our bikes to the guys on the Raleigh stand, chatting to them all about the new models and generally soaking in their knowledge and enthusiasm, then went in to the event itself for some rest and food with a programme of daily activities to hand. As the event is run over 4 days (you could pitch and stay all weekend on the site) there were different activities going on throughout each day and evening from childrens activities, entertainment and a ‘have a go area’ which had segways to try on the day we attended, the next day was zipwire too, how cool would that be?

Looking through the programme which included all the information you would need on not only the event but the beautiful Sledmere house where it was located and you could get discounted entry into but also ways to explore more of Yorkshire itself and make the most of your time there. I couldn’t believe how much there was on, throughout the whole weekend there was definitely something for everyone from bingo to bushcraft, magic to tribute acts, and sports events to a silent disco – Eva would have loved that as she can struggle with the noise of a disco sometimes, it must be a surreal experience that is for sure.

We also bumped into the lovely Lauren (a fellow blogger and allergy Mum) who gave us the heads up for the vegan pancakes. It made Evas day and they shared golden syrup and chocolate ones seen as she just couldn’t decide which one was best!

It was so nice (if a little windy) that we sat on the grass and took in the atmosphere with ice lollies before going into the arena where they were hosting a sort of garden party in honour of the royal wedding. There were all things British, flags galore, a prop stand to take photos with Meghan and Harry cutouts and the obligatory raffle and tombola. The girls love a tombola and Eva won a Teddy..yes another teddy to add to the collection!

Unfortunately by the time we had got back the bouncy castle and climbing wall situated in the Tourer Explorer zone (the childrens area) were already down for the day but we watched as they made some bug houses, and enjoyed seeing all the animals they had inside (spoiler I think the children now totally want a tortoise) there were reptiles galore, tables of craft, games to play together and glitter tattoos being done too.

There was always so much going on all simultaneously with lots to keep you busy and entertained, and similarly you only had to walk a couple of minutes before you were in a field seemingly all by yourself. There were people riding bikes, running around in the long grass and flying kites they had bought there, as we left we saw one right at the top of a huge tree, I kind of hope that was an event one rather than a poor child (or adult) who had lost it to the wind.

Had I not still been feeling poorly we could definitely have stayed longer and I would for sure have been visiting the G&T & Prosecco van. As it goes though we decided to head back to the hotel for some well deserved rest with the memories of the ride in the yorkshire countryside fresh in our minds and I am sure a memory made to last forever, and a new found love of cycling for family time. The event isnt just for cyclists, or caravan enthusiasts, but if you go, if you take part it might just change your mind anyway!

To take part in the Cyclefest it costs £6.50 Adult £1 Child for the family ride and between £25-£30 for the sportive rides (children £10), this also includes free entry into The National. You can attend The National for the day in itself (tickets £5 Adults children free) or book a pitch and stay the whole weekend and never miss a thing. The next event is the welsh wanderer which is coming up in August or you can find out on their website more information and where next years events are being held (there is also a Scottish one).

I would love to hear if you went or if you do go and if, in fact it has converted yet another family to its cycling ways….next stop, motorhome! 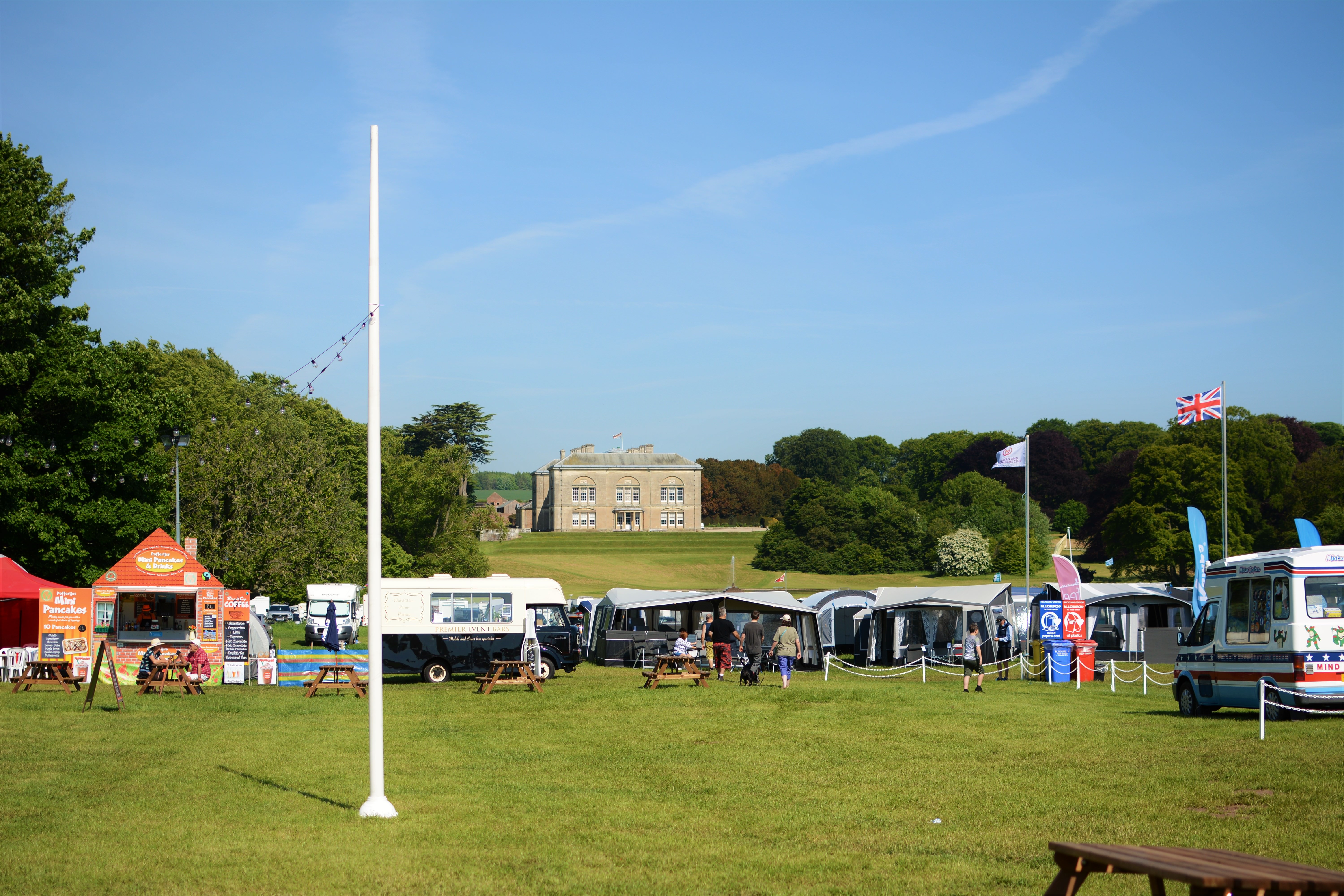 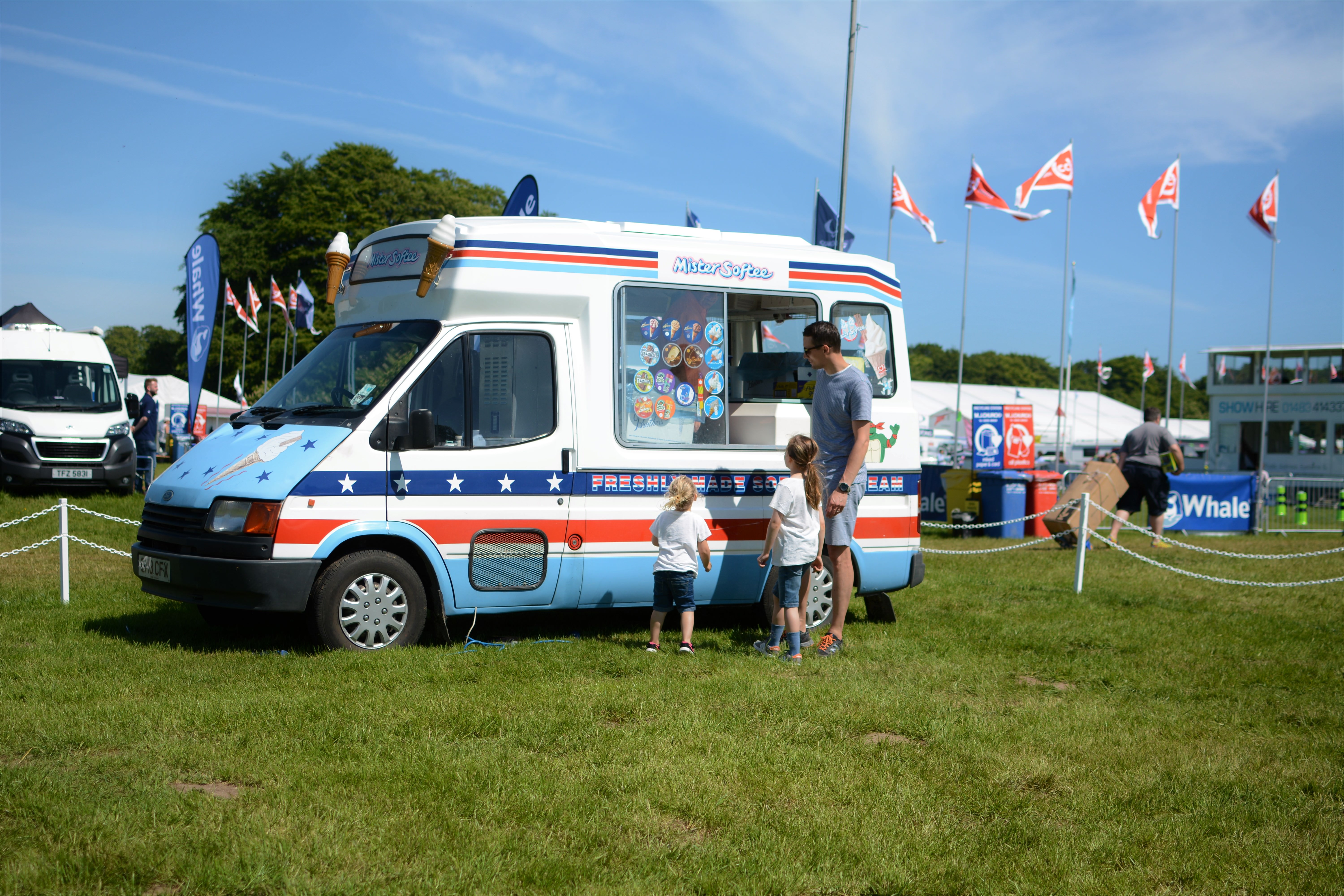 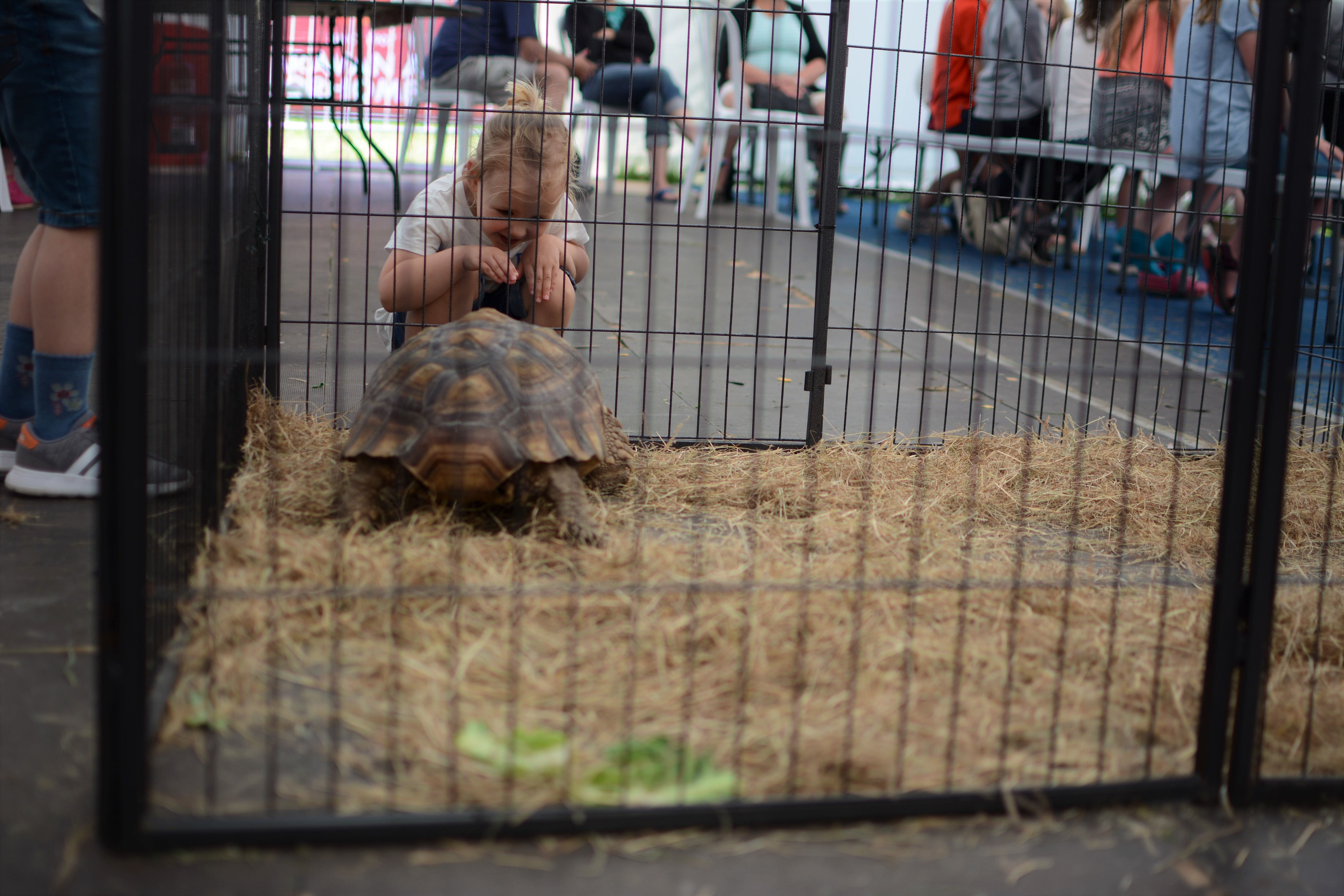 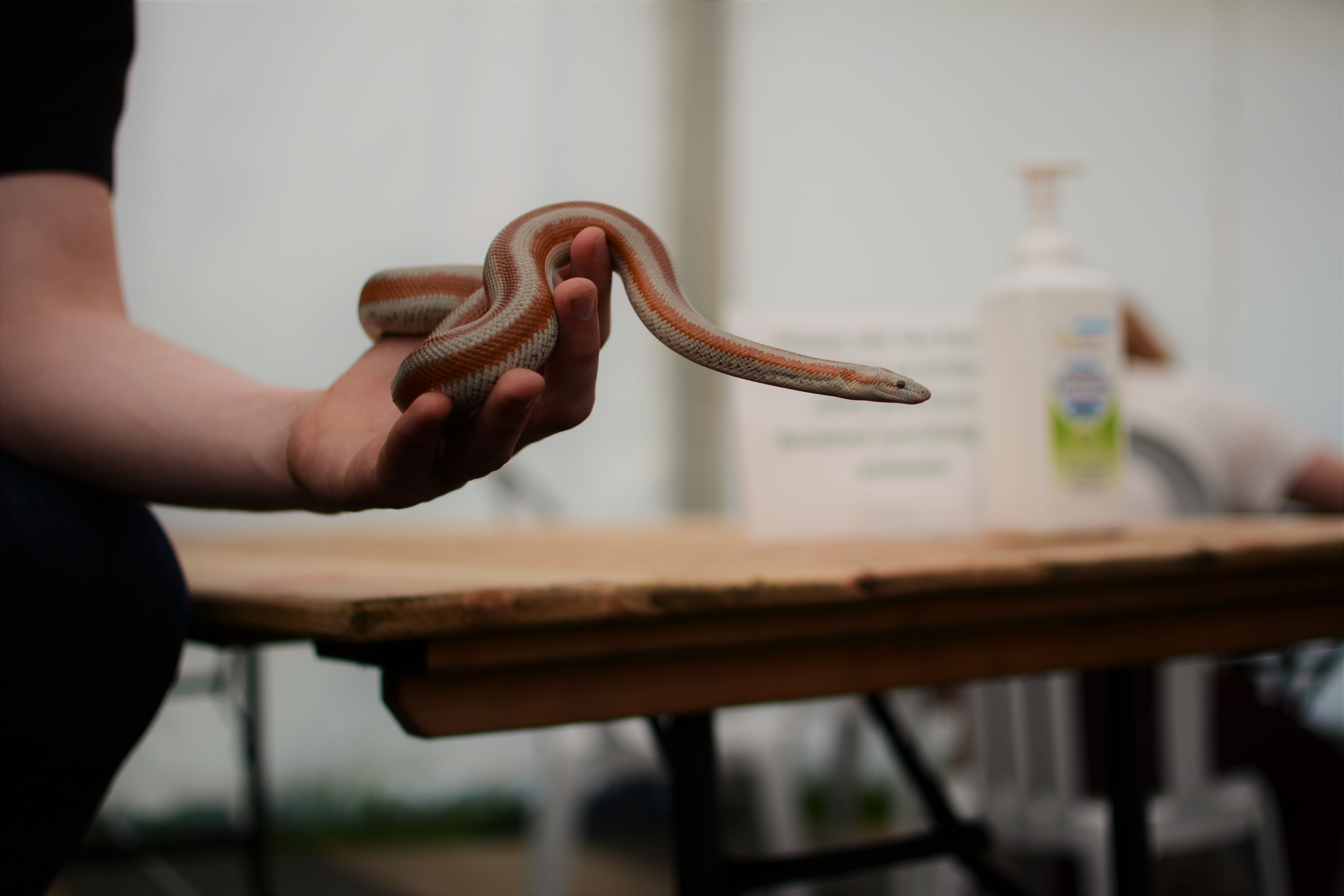 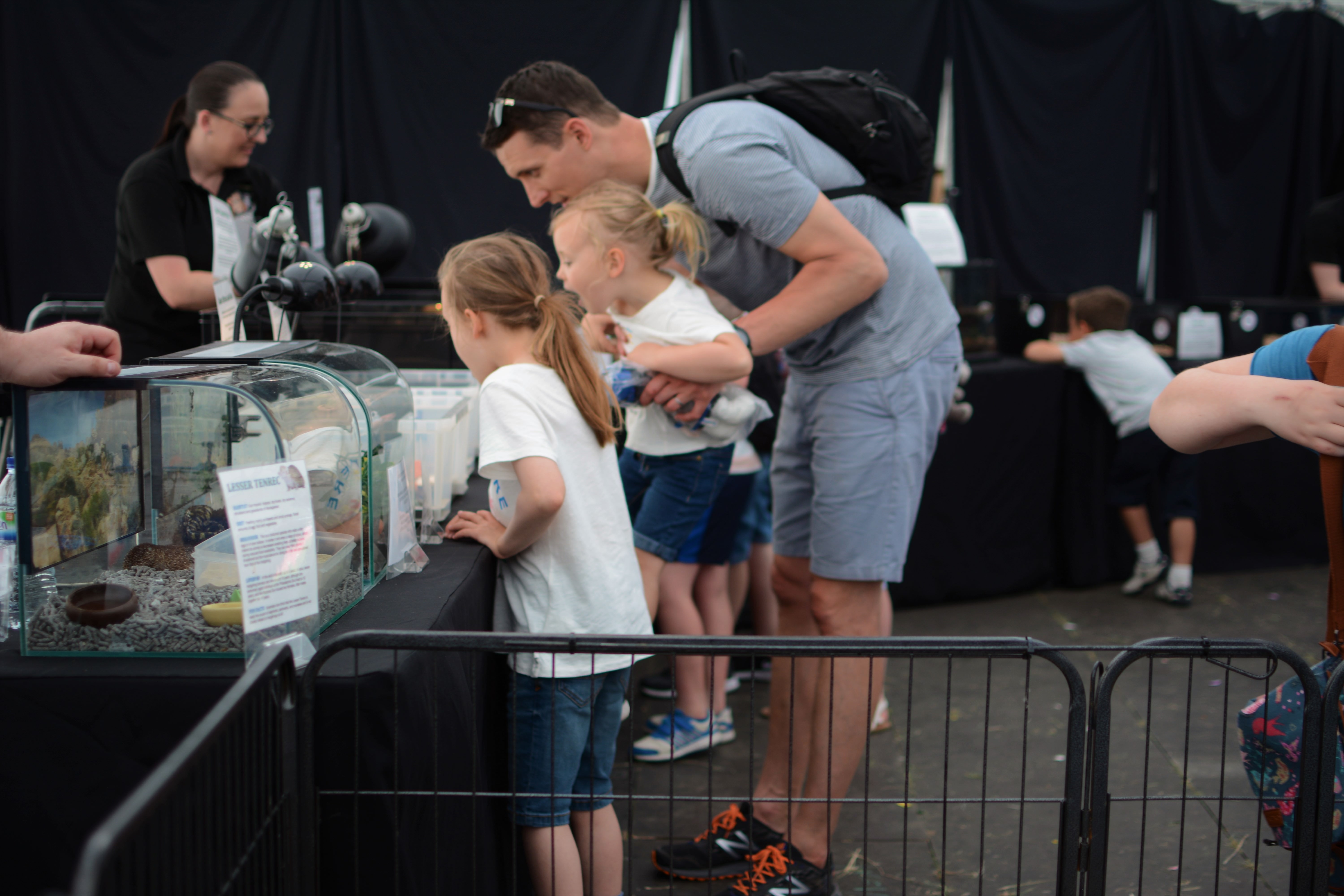 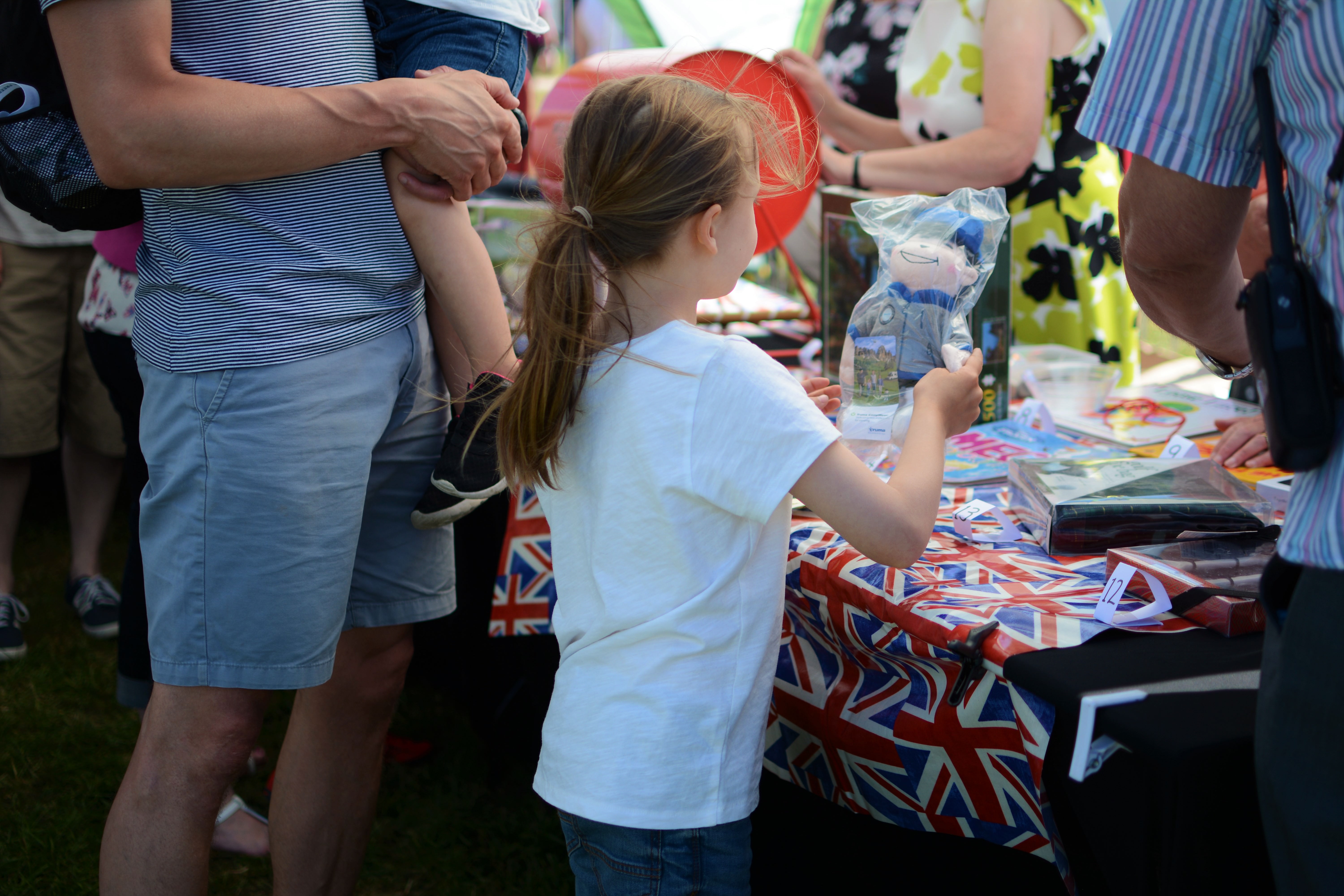 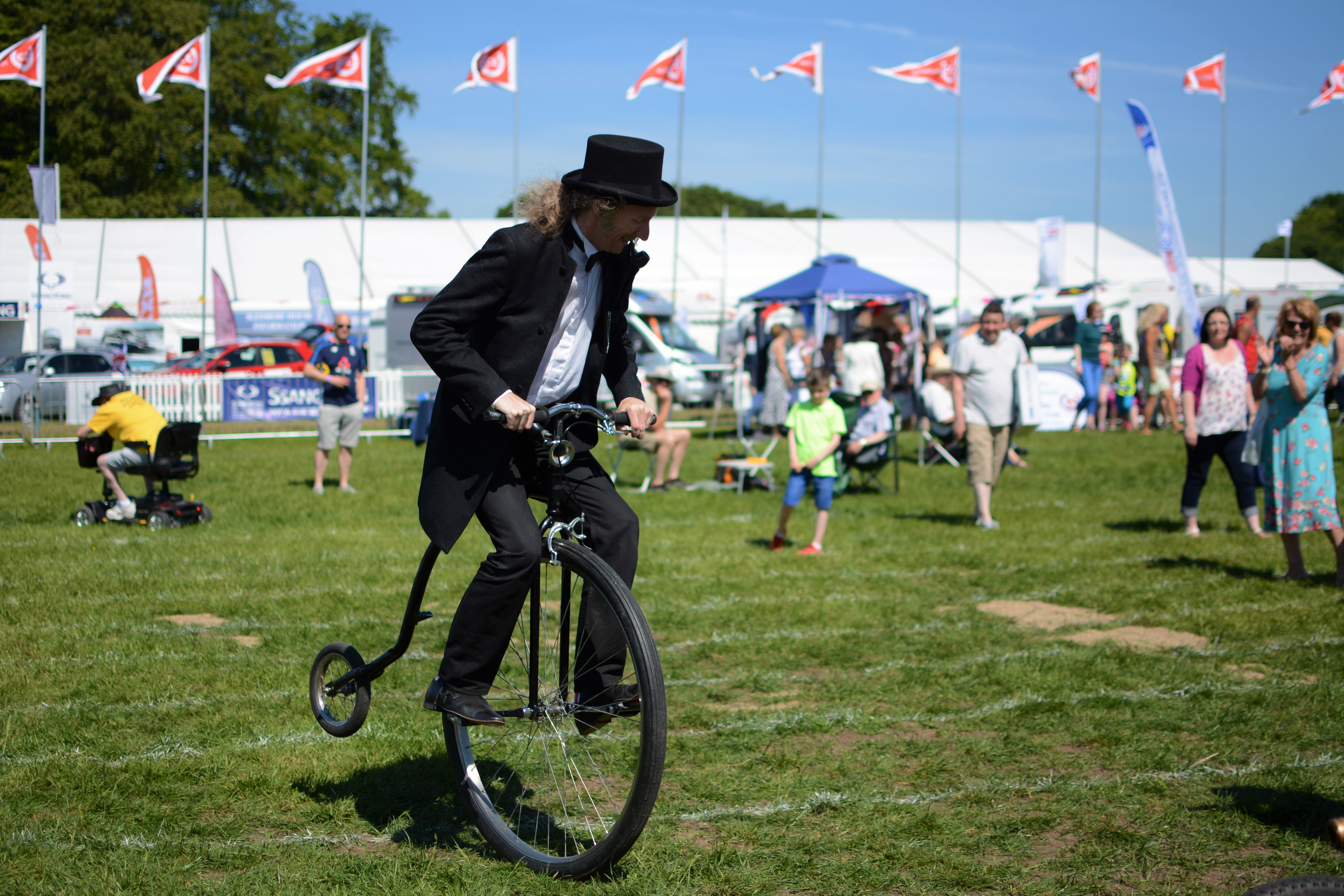 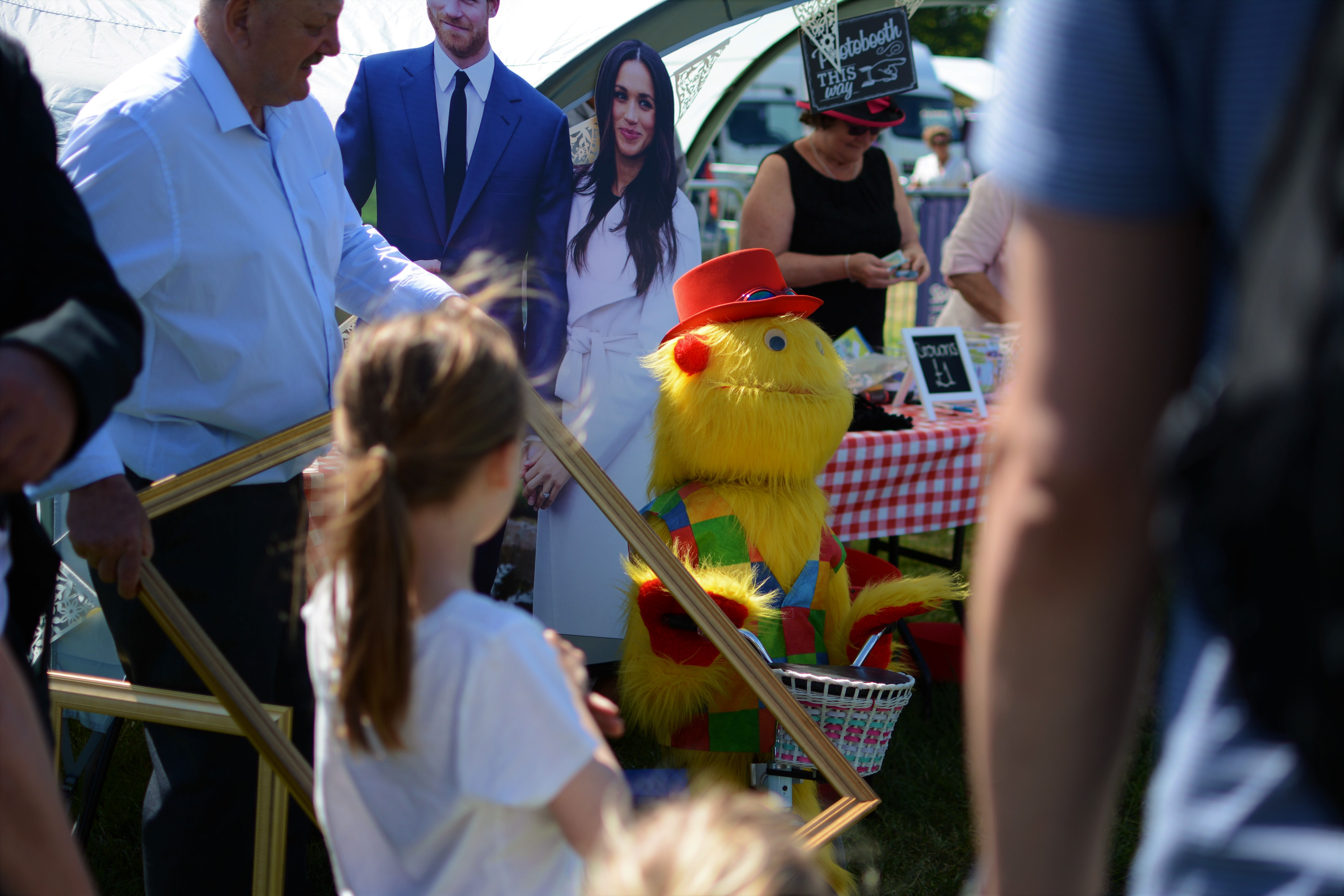 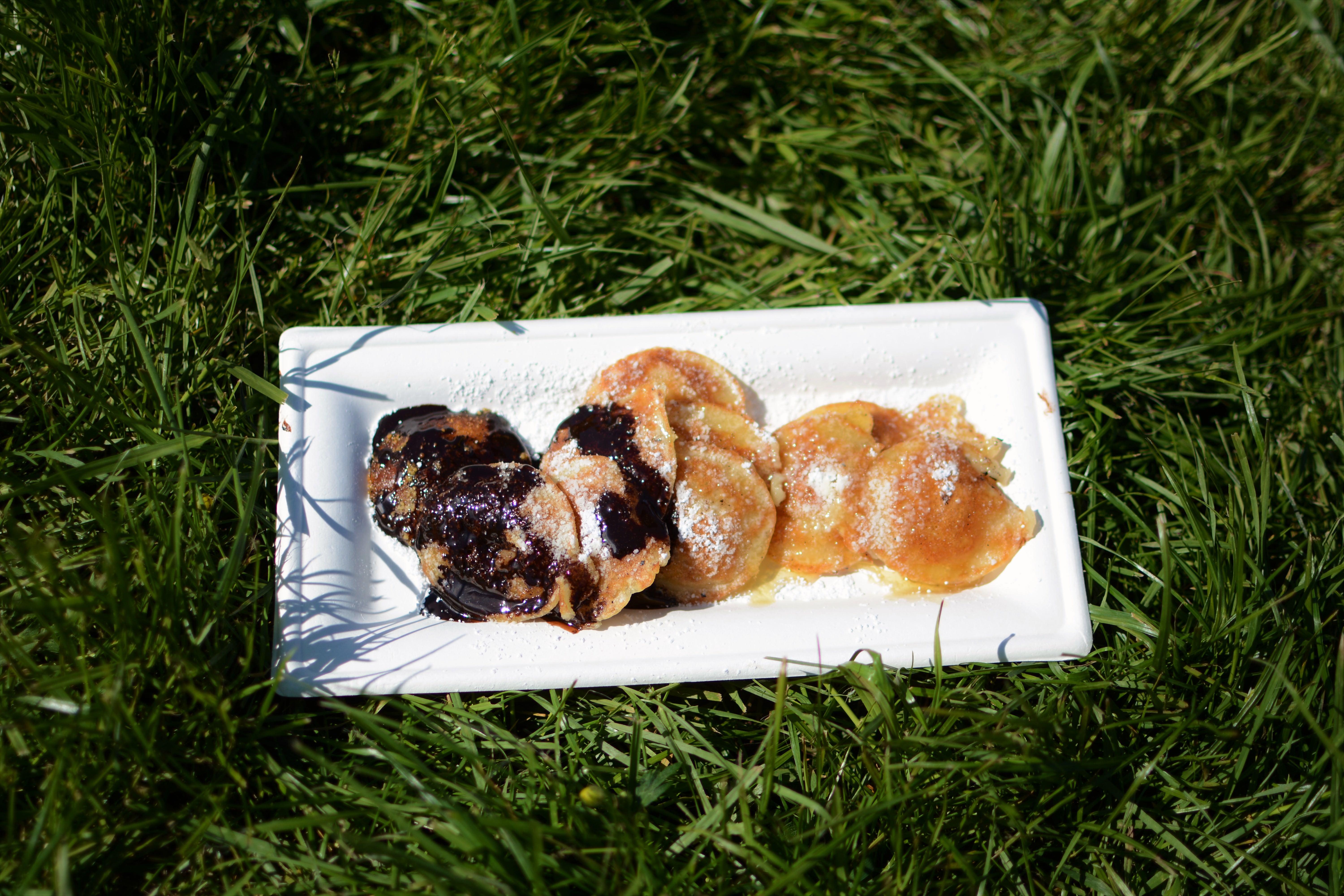 **Thank you to Experience Freedom and The Caravan and Motorhome Club for working with us and inviting us to Cyclefest and The National and Raleigh for the loan of the bikes. As usual all content and opinions are entirely my own. 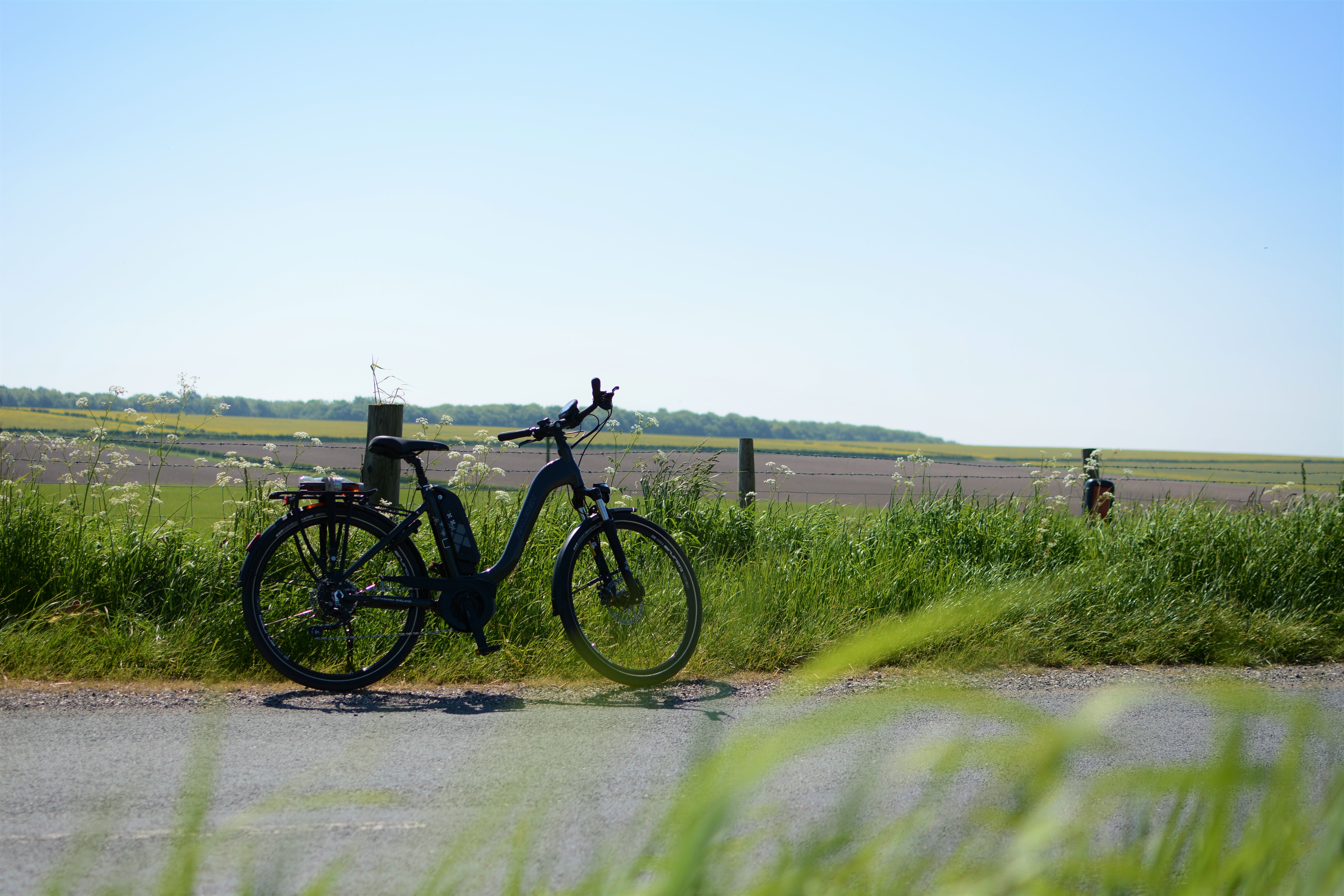 I also made a video of the day and love putting these together, even if I did sound and look a little bit rough!